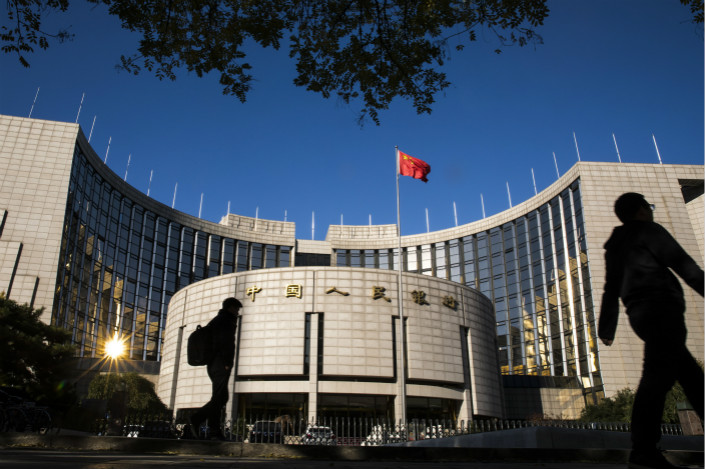 People’s Bank of China raised interest rates on seven-day and 28-day reverse-repurchase agreements, as well as its one-year medium-term lending facility, each by 5 basis points on Thursday . Photo: IC

China raised interbank borrowing costs on Thursday for the first time since March, just hours after the U.S. Federal Reserve announced an increase in its benchmark interest rate.

But the hike was marginal as the Chinese central bank tries to avoid destabilizing domestic financial markets already nervous about tighter liquidity.

However, it avoided lifting benchmark interest rates that banks charge on loans to retail and corporate borrowers, a move analysts said would have sent too strong a signal of monetary tightening.

Overnight, the Fed raised the federal funds target rate by 25 basis points to a range of 1.25%-1.5% as expected by the markets, and also revised up its projection for economic growth in the U.S. next year to 2.5% from a September estimate of 2.1%. It was the Fed’s third rate hike this year.

The PBOC was careful not to refer to its move as a tightening of monetary policy. In a statement issued after the adjustments, an unnamed official said the increase in money-market rates reflected “normal market reaction” to the U.S. Federal Reserve rate hike and was driven by strong demand for liquidity toward the year end.

The official noted that current market interest rates are “sharply higher” than the levels set by the PBOC, which is distorting the price of money and fueling the practice of selling the cash borrowed from the central bank at a profit. The adjustments will “help markets to form reasonable expectations on interest rates and prevent financial institutions from adding excessive leverage and over-expanding the supply of credit,” he said.

The minimal increase in interest rates “indicates the central bank is trying to soothe the market and prevent it from overreacting at a time when liquidity is becoming tighter towards the end of the year,” Liu Dongliang, a Shenzhen-based analyst with China Merchants Bank, said in a report on Thursday.

“But at the same time, the slight increase shows it is also trying to keep the interest rate spread with the U.S. within a reasonable range.”

To calm any potential market jitters, the PBOC official said the central bank would carry out open market operations in a “flexible manner” to “meet the banking system’s reasonable seasonal demand for liquidity.”

Cash becomes harder to obtain in the money-markets at the end of the year and through the Chinese Lunar New Year holiday because banks have to meet regulatory requirements, and the demand for money surges over the holiday period.

To emphasize its point, the PBOC also injected a net 101 billion yuan in cash into the interbank market through the issue of one-year MLF loans by adding more funds through the facility than will mature on Saturday.

The rate hike was also partly aimed at preventing the gap between U.S. and Chinese interest rates from widening too far and putting additional depreciation pressure on the yuan. The Chinese central bank raised money-market rates by 20 basis points in total during the first quarter, when the U.S. pushed up its benchmark rate. But it did not follow the Fed’s 25-basis-point rate hike in June.

Tommy Xie, an economist with OCBC Bank in Singapore, said the marginal hike also suggested the government is less concerned about depreciation pressure on the yuan than it was in early 2017. Xie said he believes the government may consider further increases to pressure banks to deleverage by making the cost of borrowing more expensive.

“The adjustment of China’s money market rate hike will continue to remind investors that financial de-leverage is a long haul project for China,” he said in a note.

Economists at Australia and New Zealand Banking Group estimate the PBOC will raise interest rates on the seven-day reverse-repo by a total of 35 basis points in 2018, taking the headline rate to 2.85%.

Most analysts do not expect benchmark interest rates to be increased given the high corporate debt levels in the country and the outlook for slowing economic growth in 2018.

“The use of money market rates could serve the purpose of battling leverage better than adjustment of benchmark lending and deposit rates,” Xie at OCBC said.

CMB’s Liu expects the yuan’s exchange rate to be more volatile next year in the face of a strong dollar backed by solid U.S. economic growth and the potential tax cut by President Donald Trump’s administration.

“Even though it may fluctuate in a wide band, the yuan’s exchange rate is unlikely to see entrenched depreciation or appreciation because the Chinese economy will gradually stabilize at the bottom part of an L-shape growth pattern and the interest rate gap between China and the U.S. will be maintained at a reasonable level,” he said.