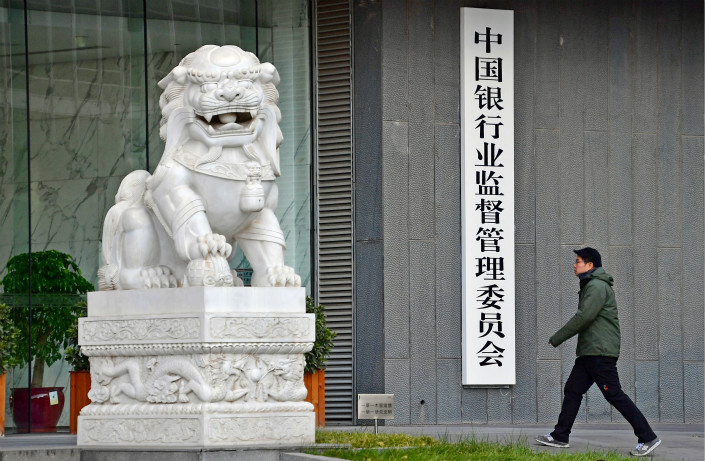 The China Banking Regulatory Commission (CBRC) has published draft rules on how banks should manage their liquidity risks, which analysts say will force lenders to reduce their dependence on borrowing from the interbank market. Photo: Visual China

China’s banks face further curbs on their ability to raise funds from the interbank market as regulators continue their campaign to reduce the leverage of financial institutions and control risks in the financial system.

The China Banking Regulatory Commission (CBRC) has published draft rules on how banks should manage their liquidity risks, which analysts say will force lenders to reduce their dependence on borrowing from the interbank market. The market is the main source of short-term funding for financial institutions, but it also carries higher risks because of the potential mismatch created between a bank’s liabilities and its assets.

The commission is planning to introduce three new indicators that are part of a global regulatory framework known as Basel III that was drawn up after the global financial crisis to make the banking sector more resilient and improve financial supervision. Basel III is intended to strengthen bank capital requirements by increasing bank liquidity and decreasing bank leverage, a process of using borrowed funds to buy assets.

“The growth of interbank financial transactions has meant that the impact of volatility in financial markets on bank liquidity has become more pronounced, and liquidity risk has become more contagious in the banking system,” the CBRC said in a statement on Wednesday. The aim of the new regulations is to “strengthen the liquidity risk management at banks and ensure the safe, stable and sound operation of the banking system,” it said, adding that the final version of the rules will go into effect on March 1.

By complying with the regulations, banks should build and improve their liquidity risk management system so as to effectively identify, calculate, monitor and control liquidity risks at levels — from the parent, subsidiaries, branches to all business sections — and ensure their liquidity needs can be covered in a timely manner at reasonable costs.

All commercial banks such as Bank of China and China Merchants Bank will have to comply with the new rules, the CBRC said. The statement indicates that policy banks will also be covered by the new regulations, which means they will be included in the scope of liquidity risk management for the first time.

The liquidity matching ratio, which will be imposed on all lenders, measures the risks in the structure of the maturities of a bank’s assets and liabilities. The lower the ratio, the more problematic the bank’s practice of making long-term investments with short-term funds.

The net stable funding ratio, which will apply only to banks with assets of more than 200 billion yuan ($30.2 billion), assesses their ability to maintain a stable funding profile to meet their liquidity commitments and obligations arising from their assets and off-balance sheet activities. The higher the ratio, the greater the bank’s ability to handle medium and long-term structural issues.

The high-quality liquid assets adequacy ratio, which will be introduced for banks with assets under 200 billion yuan, will gauge whether lenders have high-quality assets that can be quickly converted into cash to fulfill short-term liquidity needs under stress scenarios.

The CBRC set a minimum requirement of 100% for all three ratios.

“The three new indicators will help to curb banks’ interbank businesses and encourage them to return to retail and conventional lending and deposit operations,” Li Qilin, an analyst with Lianxun Securities, told Caixin.

China started allowing banks to raise money to fund their business activities in 2013 through the launch of Negotiable Certificates of Deposit in the interbank market. Smaller banks, which do not have the huge national deposit base of the big state-owned commercial banks to draw on, have flocked to issue certificates.

But the money was often used to buy longer-term assets with higher returns, especially other financial products, rather than lend the money to businesses to generate real economic activity, increasing the risk that any liquidity crunch in the interbank market would leave banks unable to refinance their NCD and force them to sell off their long-term assets, triggering a crisis.

Outstanding NCDs totaled 8 trillion yuan by June this year, 5.7 times the amount two years previously, global ratings agency Moody’s said in a report in August. More than a third of the total funding of small city and rural commercial banks and midsize joint-stock commercial banks was accounted for by NCDs as of end-June, it said.

Some lenders rated by Moody’s got as much as 40% of their total funding needs from the interbank market, compared with less than 15% for the big four state-owned commercial banks, exposing them to far greater liquidity risks should the interbank market suffer a cash crunch.

The People’s Bank of China and the banking regulator started to crack down on the NCD market earlier this year, amid mounting concerns that excessive interbank borrowing contributed to a buildup of risk in the financial system. They restricted sales and banned certificates with a duration of more than one year. The central bank will also include NCDs in its calculation of many banks’ total interbank liabilities next year, which is expected to curtail issuances.