By Fran Wang and Liu Yanfei 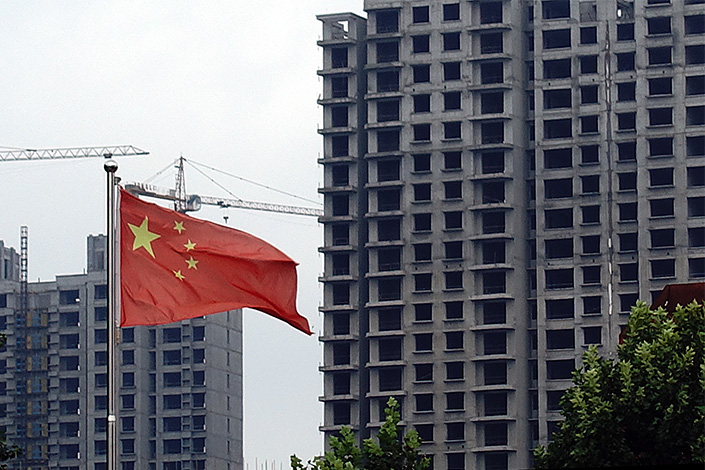 A slight moderation in the government's economic growth target will signal that it is prioritizing quality over speed “while still being consistent with goals from the previous Congresses to double income over this decade,” the Goldman Sachs economists wrote. Photo: Visual China

China is unlikely to abandon setting an economic growth target next year, although it may set a slightly less ambitious goal of “around 6.5%,” investment bank Goldman Sachs said in a report.

Speculation has grown that the government will lower the annual target for growth in gross domestic product (GDP) or abandon it altogether after President Xi Jinping stopped short of following his predecessors in setting a long-term economic expansion target at the twice-a-decade Party Congress last month.

But Goldman Sachs analysts led by Andrew Tilton, the bank’s chief Asia economist, say dropping the practice of announcing a numerical growth target would be “extremely unlikely” and “hawkish” because it is “still an important anchor for economic policymakers, ministers, and provincial officials” and that the country’s bureaucratic system is not yet ready to abandon it.

“The importance of the policy targets cannot be understated,” the bank said in a report issued at a press conference in Hong Kong on Tuesday. “They represent both a message to the bureaucracy and a public commitment.” The economists said that the target provides “meaningful information about the policy reaction function over the coming year.”

They estimate the most likely scenario is that the government will lower the GDP target for 2018 marginally to “around 6.5%” from this year’s goal announced by Premier Li Keqiang in March of “around 6.5% or higher if possible in practice.”

This slight moderation would send a signal that the government is increasingly prioritizing the quality of growth over its speed “while still being consistent with goals from the previous Congresses to double income over this decade,” the economists wrote.

In 2012, the Chinese leadership reaffirmed its commitment to doubling GDP and per capita income in 2020 from 2010’s level, which Xi said in 2015 would require annual average economic expansion of at least 6.5% through the end of the decade.

Maintaining the target with the same wording as in 2017 might confuse the message that emerged from the Party Congress in October about shifting the focus of policy making and economic growth away from speed and toward quality, they said. But anything slightly lower — such as a range of 6% to 6.5% would have a “notably more hawkish implication.”

The government traditionally drafts its annual economic plans at the Central Economic Work Conference held every December, before announcing policy targets including those for GDP growth and inflation at the National People’s Congress the following March.

Economic growth in the first nine months of 2017 was 6.9%, suggesting that Premier Li’s target will be exceeded. Most analysts expect the pace to moderate in 2018 as the government continues its campaigns to cool the property market and crack down on shadow banking and financial risks. Goldman Sachs’ baseline forecast is for expansion of 6.5%.

The economists said that the shift in the direction of economic policy is clear: greater emphasis on sustainability, reducing inequality, and risk control relative to “top line” economic growth. But the speed and effectiveness of the change is uncertain because the Chinese leadership has not yet signaled how much of a tradeoff it is prepared to accept between reform and expansion, such as through the GDP growth target, and because of the challenges posed by the country’s high leverage.

The impact of new policymakers and new provincial and local government economic officials who will take office over the next few months is also unknown as yet, they said.

The investment bank expects the yuan to resume its depreciation against the U.S. dollar next year, forecasting a weakening to 6.8 yuan per dollar by the end of 2018, and that policy makers will “tolerate some modest depreciation” of the yuan on a trade-weighted basis, moving opportunistically at times when the dollar weakens, to help support exports and overall economic growth.

The Chinese currency is set to appreciate this year for the first time since 2013. It strengthened as much as 7.1% against the dollar this year up until Sept. 7, when it was trading at 6.4865 yuan, on the back of resilience in China’s economic growth, a weak dollar, and intervention by the Chinese authorities to bolster the exchange rate amid capital outflow concerns. Since then, the yuan has weakened nearly 2%, although it’s still up by around 5 % year-to-date as of Nov. 22 when it was trading at 6.6133 yuan per dollar.

The bank also predicts a big jump in consumer inflation next year, forecasting the Consumer Price Index (CPI) will rise by 2.3% next year compared with 1.5% in the first 10 months of this year.

But it doesn’t expect the increase to trigger monetary tightening through interest rate hikes because monetary policy will need to be “supportive” to guard against a major growth slowdown. The authorities also have new tools, such as the macro prudential assessment framework, to limit financial risks.

“While we expect CPI inflation to pick up, partly driven by a normalization of depressed food prices, we believe it is unlikely to rise enough to become a binding constraint on the (central bank’s) policy stance,” the report said, adding it anticipates “downside risk” in rates “later in 2018 and beyond.”

Fixed-asset investment, a key driver of domestic demand that is often fueled by credit, is forecast by Goldman Sachs to weaken to 5.9% next year from a rate of 7% this year, according to the report. Infrastructure investment, mainly led by government spending, is seen to increase 12% in 2018, down from 16% this year; while growth in real estate investment will weaken to just 4% from 7%.

China is stepping up scrutiny of local government spending as it intensifies efforts to rein in their mounting debt risks and make their finances more transparent.

The National Development and Reform Commission, the country’s top economic planner, is revising a 2003 rule to tighten policy on urban subway construction after projects worth billions of dollars were suspended under central government pressure.

The Ministry of Finance has also ordered local governments to review, identify and remove from the official registration system unqualified public-private partnership (PPP) deals to stem abuses of the initiative by local authorities as a new way to take loans off their balance sheet. The PPP program intends to replenish financial shortfalls of local governments in funding infrastructure projects by allowing the private sector to make an investment.

Meanwhile, property investment in the country has been slowing gradually for months amid government controls on home purchases, waning support from an official program to renovate shanty towns and growing funding difficulties faced by many developers.