By Fran Wang and Wang Xiaoxia 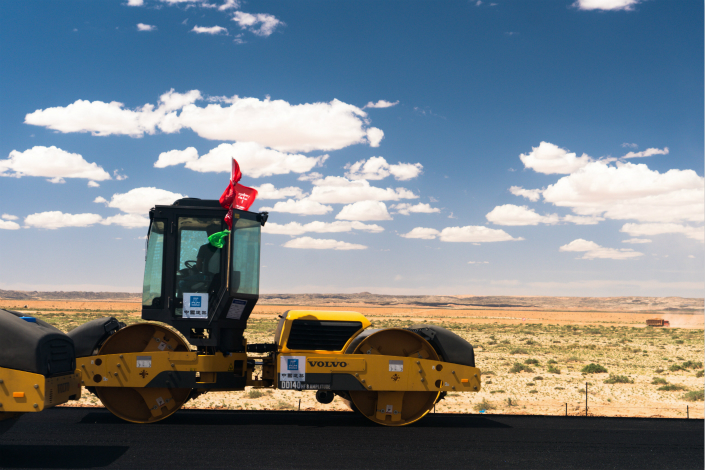 China’s Ministry of Finance is concerned that local governments have used public-private partnerships as a way to circumvent central government efforts to control the growth in off-balance sheet local government debt. Above, a highway is under construction in Inner Mongolia in July 2016. Photo: Visual China

China is stepping up efforts to close loopholes in its public-private partnership initiative that are being exploited by local governments to borrow more money through banned channels.

In a notice posted Thursday on its website, the Ministry of Finance announced an overhaul of the approval system and told local governments nationwide that they have until the end of March to comply with orders to review, identify and remove unqualified projects from the official PPP registration system.

Delisting means the deals will not be eligible to be funded through the PPP model, under which private companies invest in government infrastructure projects. Authorities unable to meet the deadline will be given a 30-day grace period, but after that, the registration of new projects will be suspended in their provinces, the statement said.

The order is intended to “prevent the PPP program from being abused and turned into a new type of (government) financing vehicle, and to firmly contain the risks of an increase in hidden debt,” the ministry said.

The announcement comes amid mounting evidence that the initiative has been used as a way to circumvent central government efforts to control the growth in off-balance sheet local government debt and improve the transparency of local finances. Under pressure to support the program amid a tepid response from the private sector, some local officials are offering secret deals or incentives to entice outside investors and approving projects that don’t fit the PPP criteria laid out by the central government.

As far back as 2016, the Ministry of Finance was already concerned that PPP projects had accumulated excessive debt and in October of that year ordered local finance departments to survey local government borrowings as well as spending on PPP projects.

The ministry’s latest crackdown was foreshadowed by Vice Finance Minister Shi Yaobin earlier this month. Speaking at a PPP financing forum on Nov. 1, he said that “hidden risks have been built up, and we must be highly vigilant and take concrete measures to sort them out.”

In its statement Thursday, the ministry provided a list of projects that are not eligible to be registered in the official PPP system, including non-public-service programs such as commercial property development, those involve in national security, and pure construction deals where the private investor is not involved in the operation of the project after construction is completed.

Also banned are deals that have not obtained official approval such as ownership transfer of state-owned assets and those that have not passed the required value-for-money (VFM) analysis and fiscal affordability reviews, the ministry said. VFM analysis seeks to determine whether replacing a purely state-funded investment and operation of a project with a PPP arrangement is cost-effective and/or improves the quality of the public service.

Projects that do not have a sustainable future payment mechanism for the public asset or service and are dependent on government payments or subsidies for their operation, or where charging fees will trigger an abrupt spike in fiscal spending over a certain period of time, will also be prevented from registering.

Even projects already in the system may have their classification revoked if the review finds problems, such as improper VFM analysis or fiscal affordability assessment, and no progress within a year of enrollment, according to the statement.

Existing PPP projects will also be removed if borrowed money is used to make the investment, or if local governments have promised to buy back the equity of private investors or to compensate private investors for losses on their investment capital, it said. Deals with local authorities providing guarantees for debt repayment will also be taken off the system.

China introduced the PPP program in late 2013 to help cash-strapped local governments maintain investment. Projects listed under the initiative allowed them to raise money for public infrastructure projects amid a crackdown on other sources of off-balance sheet funding, notably the use of local government financing vehicles (LGFVs), companies set up specifically to issue bonds and get bank loans — which local governments themselves were banned from doing.

By the end of September, a total of 14,220 projects with a combined planned investment of 17.8 trillion yuan ($2.68 trillion) — nearly a quarter of China’s gross domestic product in 2016 — had been registered, according to the MOF’s latest quarterly PPP report. Of those, 6,778 with total planned investment of 10.1 trillion yuan have reached the stage of preparation, procurement or execution.

The report also revealed the increased scrutiny that PPP projects are getting from the ministry. Of the 973 projects removed from the ministry’s national PPP system in the first nine months of this year, 635 were withdrawn in the third quarter. Some had failed to attract enough private capital or were cancelled by local authorities because they did not obtain the necessary official approvals.

A common concern has been local authorities’ abuse of the model to disguise debt as equity, and ruses such as bringing in sham private investors to push projects through.

In February, the MOF ordered the government of central China’s Hubei province to investigate a PPP deal in the provincial capital of Wuhan after the project published shareholder information showing that all of the “private investors” were in fact banks. Similar problems were uncovered in contracts for public transportation projects in the eastern province of Shandong and the southwestern province of Guizhou.