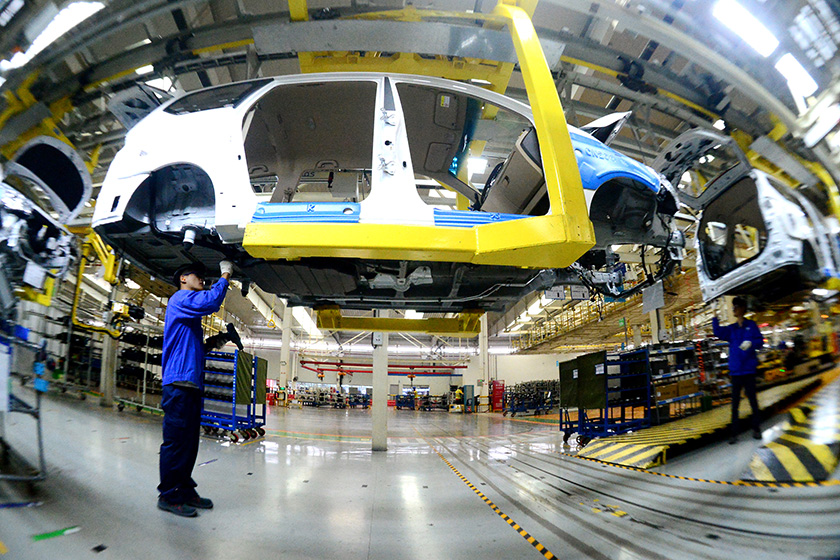 An analyst told Caixin that tightened monetary and financial policies, in addition to government-madnated production cuts driven by pollution targets, have played major a role in slowing the Chinese economy. Photo: Visual China

The Chinese economy showed more signs of slowing down in October as industrial activity was hit by the government’s anti-pollution policies and weakened exports while a cooling property market took its toll on investment and on sales of housing-related goods.

Value-added industrial output, which measures production at China’s factories, mines and the utility sector, rose 6.2% last month from a year ago, down from an increase of 6.6% in September, data released by the National Bureau of Statistics (NBS) on Tuesday showed.

Fixed-asset investment excluding rural households, a key driver of domestic demand, grew 7.3% year-on-year in the January-through-October period, the weakest pace since 6.3% in the full year of 1999, according to NBS data. Retail sales, which include spending by households, government departments and businesses, rose 10% year-on-year in October, the weakest pace since the combined 9.5% for the January-February period and trailing analysts’ median estimate for a gain of 10.5%.

“The data adds to our conviction that China’s economic growth passed its cyclical peak earlier this year,” Zhao Yang, a Hong Kong-based analyst with Japanese investment bank Nomura, said in a research note, adding that the economy is now on a deceleration trajectory.

The world’s second-largest economy posted the first slowdown in growth since early 2016 in the third quarter, with the year-on-year increase in gross domestic product (GDP) slipping to 6.8% from the 6.9% in the first and second quarters. Zhao expects GDP growth to soften to 6.6% in the last three months of this year.

Kuijs said that according to his calculations, home sales fell 8.6% in October from a year ago, steeper than September’s drop of 5.7%, and growth in housing starts, which reflects developers’ confidence, dropped by 2.9% year-on-year.

“We expect real-estate activity to continue to slow in the coming 15 months amid tighter monetary and financial policies and reduced impact of policies to encourage ‘shanty town’ renovation,” which supported the property market in much of 2017, he said.

Beijing’s ongoing campaign to deleverage the financial sector has continued to contain expansion in M2, China’s broadest measurement of money supply. Data from the People’s Bank of China (PBOC) this week showed that at the end of October, M2 was up 8.8% from a year ago, a record-low increase, and the growth rate has slowed gradually from 11.6% in October 2016.

Ruan Jianhong, head of the PBOC’s statistics department, in July described the slowdown as a “new normal” and a sign of progress in cutting financial leverage. Lending through the “shadow banking” channels of entrusted loans, trust loans and bankers’ acceptance bills, much of which goes to the real estate sector, also shrank significantly last month from September, according to the PBOC.

The slowdown in the real estate market also dragged on consumption, with increases in sales of furniture, decorating materials and home appliances all weakening sharply in October on a year-on-year basis compared with September growth rates.

Government policy to restrict output in some industries to curb toxic smog in North China in winter is also weighing on economic growth. In the 28 northern cities targeted in the program, authorities in August ordered industries such as power generation, steel, coking, cement, glass, nonferrous metals, medicinal ingredient, and packaging and printing to upgrade their facilities to meet emissions requirements by the end of October and vowed to suspend production at plants that failed to comply.

NBS data showed that although output of steel picked up slightly in October, production of panel glass declined for the first time since May 2016 and growth in power generation was the weakest since June 2016. The fall in cement production deepened last month while aluminum output decreased at its fastest pace since the first two months of 2016.

Infrastructure investment, mainly driven by government spending, rose 19.6% in the first 10 months of the year from the same period in 2016, the slowest pace this year, as fiscal spending tightened. Data from the Ministry of Finance showed fiscal spending declined for the first time this year in October, falling 8% year-on-year. The ministry attributed it to the front loading of expenditure earlier in the year, suggesting there’s unlikely to be a recovery in the remainder of the year.

Julian Evans-Pritchard, an analyst with research firm Capital Economics in Singapore, said infrastructure spending was still strong and has helped to offset the drag on growth from a cooling property sector, softer foreign demand and disruptions from the anti-pollution crackdown.

“But this support seems unlikely to last given that local governments are set to reduce spending in the final months of the year in order to meet budget targets,” he wrote in a research note after the data.