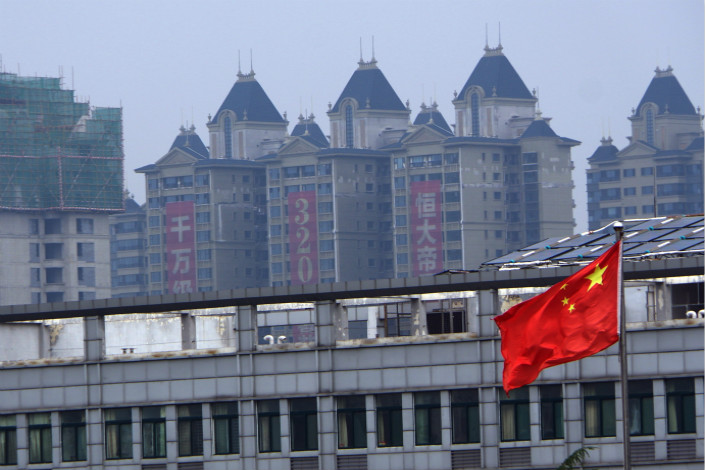 A Chinese national flag is seen in front of a high-rise residential project under construction in the city of Ji'nan, in east China's Shandong province, on Aug. 21, 2017. China’s economy expanded by 6.9% in 2017, the first increase in growth in seven years. Photo: IC

China’s economic growth accelerated for the first time in seven years in 2017 and beat the government's target. The resilience of the world's second-largest economy may give policymakers more leeway to continue with efforts to rein in debt, reduce pollution and overhaul state-owned enterprises, measures that could weigh on expansion this year.

Gross domestic product (GDP) in the world’s second-largest economy increased by 6.9% last year, Ning Jizhe, head of the National Bureau of Statistics (NBS), said at a news conference Thursday. The increase, which matched the estimate announced by Premier Li Keqiang last week, was higher than the 6.7% pace in 2016 and the first acceleration since 2010. It also beat the government’s growth target for 2017 of “around 6.5%.”

Growth in the fourth quarter of 2017 came in at 6.8% year on year, the same rate as the July-September period and marginally higher than the median forecast of 6.7% in a Bloomberg News survey of economists. That followed expansion of 6.9% in the first and second quarters.

Economists attributed the pick-up in expansion last year to a range of factors. These included strong growth in government-supported infrastructure investment, a robust recovery in overseas demand for Chinese exports, and resilient real-estate investment in spite of government policies to cool the property market through administrative controls on home purchases. These helped counter the negative impact of government campaigns to curb pollution and rein in financial risks and debt growth.

President Xi Jinping has indicated the Chinese leadership will tolerate slower growth as the focus of the next three years shifts to containing risks, particularly financial risks, improving poverty alleviation efforts, and containing pollution. Xi has de-emphasized quantitative targets and called on officials to prioritize the quality of growth over speed. The government has also pledged to continue with policies to control residential property prices. 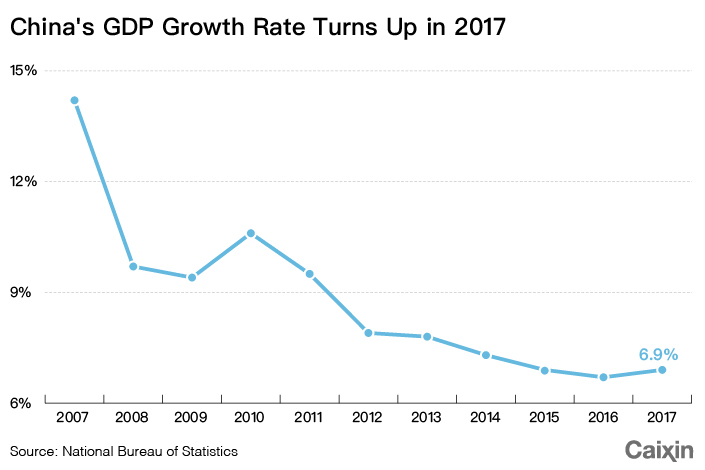 Faster than targeted growth last year “will prompt (the government) to introduce more regulatory policies to further crack down on shadow banking and expand the deleveraging campaign from within the financial industry to include the corporate sector,” Liu Dongliang, an analyst with China Merchants Bank, said in a report after the data. “Tightening measures will be maintained on local government financing, leading local government-driven infrastructure investment to continue to slow,” he said, forecasting that GDP growth will moderate to 6.7%-6.8% in 2018.

In addition to quarterly GDP numbers, the NBS also released activity data for December. Value-added industrial output, which measures production at factories, mines and the utilities sector, increased by 6.2% year on year, marginally faster than the 6.1% year-on-year pace in November and the median forecast in Bloomberg’s survey for a 6.1% rise.

Fixed-asset investment (FAI) excluding rural households, a key driver of domestic demand, increased by 7.2% in the January-December period, the weakest rate since 1999’s 6.3%, NBS data showed. The statistics bureau only provides cumulative data for FAI. Infrastructure investment – construction of roads, railways, and other public facilities such as hospitals and sewage systems – rose by 19% while manufacturing investment increased by 4.8%. Property investment rose by 7% last year, little changed on the 6.9% pace of 2016.

Retail sales, which include spending by households, government departments and businesses, rose by 9.4% last month from a year ago. That was down from a 10.2% pace in November and was the lowest growth since February 2004, according to NBS data. The increase also trailed the median economist estimate of a 10.2% jump.

Economists at HSBC said the slowdown, which was notable for cars, communication equipment (usually a proxy for smartphones) and cosmetics, may have been partly related to the Singles Day internet shopping festival in November which could have led consumers to front-load discretionary purchases.

Some analysts have warned that the government’s continued crackdown on shadow banking activities to force the financial sector to deleverage will further restrict the ability of local governments and property developers to raise funds for investment. That will rein in the construction of infrastructure and real-estate projects and drag down economic growth.

China’s central government has issued a number of rules to stem what it has described as reckless borrowing by local authorities to circumvent budgetary restrictions on spending. The authorities have highlighted in particular methods such as fake government procurement of services and abuses of public-private partnership projects.

In the latest move, the Ministry of Finance and the China Insurance Regulatory Commission on Thursday released a joint statement (link in Chinese) about tightening rules on the methods by which insurance companies can provide funds for local governments.

“There are rising concerns that infrastructure investment could slow in 2018 as a result of tightening regulations against local governments’ extra budget spending,” economists with Standard Chartered said in a report on Thursday.

The government’s controls on home purchases and permits for developers’ to sell apartments have had a significant impact on the real-estate industry. The increase in new-home sales slowed to 11.3% last year from 36.1% in 2016 in value terms and to 5.3% from 22.4% in terms of floorspace.

However, there are signs that the market is recovering in spite of the curbs. New-home starts rose by 10.5% last year, up from 8.7% in 2016, although the January-December growth rate slipped from 10.8% in the January-November period, and land purchases by developers jumped 15.8% by area, reversing a fall of 3.4% the previous year. A real-estate climate index compiled by the NBS rose in December to its highest level in 2017, suggesting builders are becoming more optimistic.

Although the government has insisted that measures to control the housing market won’t be relaxed, policies to encourage developers to shift to building homes for rent may help cushion the impact and support the sector and related industries such as steel, glass and cement, this year.

That said, there are still clouds on the horizon for the real-estate market, which some economists estimate accounts for as much as 20% of economic activity once related industries such as steel and home appliances are taken into account.

In a wide-ranging interview (link in Chinese) with the official People’s Daily newspaper published on Wednesday, Guo Shuqing, chairman of the China Banking Regulatory Commission, said the watchdog will strengthen efforts to contain bubbles in the property market. It will also act to reduce the debt levels in the corporate sector and rein in household borrowing, which has risen rapidly over the past year as mortgage lending soared.

Many analysts say the government is likely to lower its economic growth target this year or place less emphasis on the number to allow it to focus on containing financial risks and cleaning up the environment, policies that may crimp growth in some industries. The target is traditionally announced by the premier in March at the opening of the annual session of the National People’s Congress, or parliament.

“We expect the growth target for 2018 to be slightly lowered or de-emphasized,” economists at UBS wrote in a report on Jan. 3, forecasting that GDP will rise by 6.4% this year, weighed down by weaker property activity, stricter environmental rules and tighter local government financing.