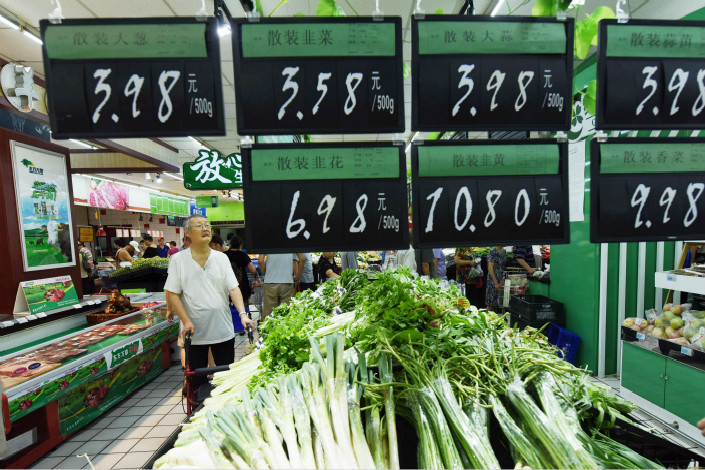 Julian Evans-Pritchard, an analyst with research firm Capital Economics, said that December's increase in the consumer price index was "entirely" driven by increases in food price and that "broad price pressures are easing." Above, Vegetables are displayed at a supermarket in Hangzhou, Zhejiang province, on Aug. 9. Photo: Visual China

The growth in China’s producer prices slowed to its weakest rate in 13 months in December, official data showed Wednesday, with some analysts expecting industrial inflation to decline further this year on moderating economic expansion.

The producer price index (PPI), which measures changes in the prices of goods bought and sold by manufacturers and mining companies, rose 4.9% year-on-year last month, its lowest reading since November 2016, according to the National Bureau of Statistics (NBS). The reading was marginally above the median projection of an increase of 4.8% from a survey of economists by Bloomberg News.

The consumer price index (CPI), a gauge of prices of a basket of consumer goods and services, increased 1.8% from a year ago, up from a gain of 1.7% in the previous month, the NBS said. It was slightly lower than the median forecast of a 1.9% gain from the poll.

For the full year of 2017, the PPI climbed 6.3%, the first increase since 2011 and the highest figure in nine years. The PPI began rising again in September 2016 after falling for 54 straight months. The recovery was bolstered by the Chinese government’s campaign to reduce excess capacity in industries such as coal, steel and aluminum, as well as its drive to clean the environment.

The CPI grew 1.6% last year, down from a rise of 2.0% in 2016 and far short of the government’s target of a gain of “around 3%.” It was the sixth consecutive year that the CPI increase missed the government’s goal.

Looking ahead, PPI growth may continue to moderate in the first three months of this year before picking up in the April-through-June period due to low comparison figures in 2017, said economists with Nomura International. However, CPI inflation will likely rise in the coming quarters, driven by food and services prices, and the “pass-through of high producer and property prices,” they added.

“We expect PPI inflation to continue to moderate in (the first quarter) on a weakening of investment demand,” they wrote in a note.

NBS analyst Sheng Guoqing blamed the decline in December’s PPI reading on slower increase in prices in mining, raw materials and other upstream sectors. Five industries, including petroleum and natural gas extraction, nonferrous metal processing, and coal mining, combined to drag down PPI growth by about 0.6 percentage points from the headline PPI figure, he said in a statement.

Month-on-month, PPI growth accelerated to 0.8% last month from 0.5% in November. But the uptick might be short-lived as it was mainly led by contingent government policies to suspend production at factories to curb choking air pollution in North China during the winter heating season, analysts said.

“The recent resilience of producer price inflation in month-on-month terms is in large part due to temporary disruptions caused by the anti-pollution campaign, which are likely to reverse before long,” Julian Evans-Pritchard, an analyst with research firm Capital Economics, said in a report.

He also noted that even though CPI growth accelerated last month, nonfood inflation and the core CPI, which excludes the more-volatile food and energy prices and which economists say better reflects the long-term trend in inflation, both edged down from November.

He predicts inflation will continue to fall this year due to softening growth in the world’s second-largest economy, prompting China’s policymakers to turn on the lending tap.

“Food prices aside, inflation will continue to drop back in the coming quarters as economic activity softens,” he said. “We believe that a further decline in producer price inflation — which is highly correlated with earnings growth among indebted industrial firms — will help push the People’s Bank (of China) to ease monetary policy over the course of this year.”

China’s gross domestic product (GDP), a measure of economic growth, rose by 6.8% year-on-year in the July-through-September period, slowing from a 6.9% pace in the first and second quarters. It was the first slowdown in growth since early 2016.

Analysts widely expect GDP growth to weaken further this year as the government sticks to a tightening monetary policy stance amid its efforts to deleverage the economy, particularly the financial sector, to contain debt risks.

The NBS is scheduled to release GDP growth figures for the fourth quarter on Jan. 18.