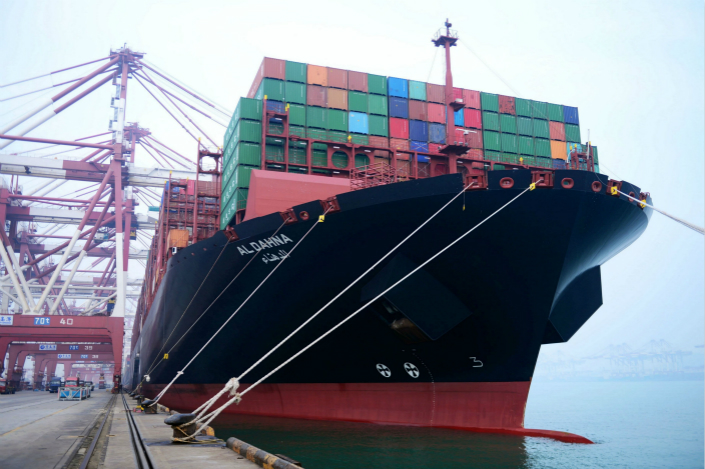 China's total foreign trade also increased in 2017 for the first time in three years, he said, according to the Xinhua News Agency report on Thursday. Photo: Visual China

China’s Premier Li Keqiang has revealed the economy grew by around 6.9% last year, just days before the government is due to officially release the numbers. The growth rate, if confirmed next week, would be the first acceleration in seven years.

The rate is way ahead of the official target of an increase of around 6.5% set in March, and is likely to give leaders more confidence in the economy and greater leeway to push ahead with the overhauls they promised.

Analysts have broadly expected expansion in the world’s second-largest economy to slow this year as policymakers vowed to pursue “high quality” rather than fast growth. Top leaders have listed preventing risks, particularly financial risks, improving poverty alleviation efforts, and containing pollution as the top priorities over the next three years.

The country’s total foreign trade also increased in 2017 for the first time in three years, he said, according to the report on Thursday.

Last year, China’s gross domestic product (GDP) grew 6.8% in the July-September period after increasing by 6.9% in each of the previous two quarters. A full-year GDP expansion rate of 6.9% indicates that the economy maintained strong momentum in the last three months of 2017.

Key fourth-quarter economic data including the GDP growth rate are scheduled to be announced by the National Bureau of Statistics on Jan. 18.

China’s growth last year was underpinned by robust foreign demand for the country’s exports due to the surprisingly strong recovery of major economies, healthy industrial inflation that boosted corporate earnings, and the resilient property market supported by the government’s program to renovate outdated housing, analysts have said.

But most economists believe GDP growth will decelerate this year as the government is prepared to tolerate slower expansion so that it can press ahead with reforms.

“Although growth will continue to be a key objective even in the long run … somewhat less emphasis on speed should increase the room for the reforms that China is likely to need if it is to achieve a more balanced and sustainable growth trajectory,” He Tianjie and Louis Kuij, analysts with research firm Oxford Economics, wrote in a report this week.

They expect the government will still set its economic growth goal at around 6.5% for this year, while the actual annual expansion rate will trend down to 6.4%.

Macquarie Capital Ltd. analyst Larry Hu pointed out that key issues affecting economic growth this year will be whether the government will be “braver” than before in tightening infrastructure spending to push for the deleveraging campaign, what inflation will look like, and to what extent the real estate market will cool.

“The single-most important question for 2018 is how far deleveraging will go, especially in the realm of infrastructure spending, which is largely funded by local government debt,” he said in a note last week.

China’s industrial inflation turned positive last year for the first time since 2011, hitting 6.3%, its highest reading in nine years. It was bolstered by the government’s drive to cut excessive capacity in industries including coal, steel and aluminum, as well as its policy to suspend factory production to reduce air pollution in winter in North China.

“The question for 2018 is whether demand-side factors such as infrastructure and property FAI (fixed-asset investment) could drive PPI (producer price index) again,” Hu said.

The government has been encouraging development of the rental housing market as a long-term solution to rein in overly fast home price rises, but whether it can meet demand in major cities remains “highly uncertain,” he cautioned. In addition, the proposed nationwide rollout of a new property tax is “almost impossible to build consensus on,” he added.

He also forecast GDP growth will decline to 6.4% this year.

UBS analysts’ prediction of economic growth in 2018 is the same at 6.4%. Property sales and construction will likely slow on sustained tightening policies and fading market momentum. At the same time, infrastructure investment is expected to decelerate on tighter local government financing. And supply-side reform, including the fight against air pollution and further capacity reduction, will dampens industrial production and investment, they said in a report earlier this month.