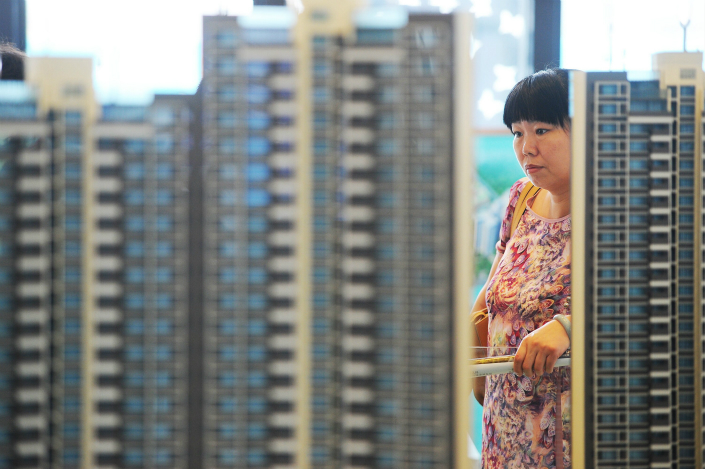 A property tax has been discussed for decades in China. The goals for the tax are to broaden the tax base, increase tax revenue — especially for regional and local governments — and to tax the rich to narrow the wealth gap. Curtailing soaring home prices is less of a factor. Photo: Visual China

On the day China’s top leaders wrapped up their annual economic policy meeting on Dec. 20, the Communist Party’s official newspaper republished an op-ed that mentioned a proposed property tax, fueling expectations that its launch was imminent.

The article, penned by Finance Minister Xiao Jie, said that China aims to implement the new tax based on the appraised value of real estate after a special law is passed. He did not give a timetable on when this particular law will be enacted. Rather, he said that the country plans to “complete the reform to implement statutory taxation” in 2020 after finalizing all related legislations in the previous year.

The op-ed first appeared in early November in a book printed by the official People’s Publishing House shortly after the 19th Party Congress.

A property tax has been discussed for decades in China. In recent years, government officials said it is part of the country’s tax overhaul. The objectives are to broaden tax base, increase tax revenue — especially for regional and local governments — and to tax the rich to narrow the wealth gap. Curtailing rising home prices is less of a factor.

How is the proposed property tax different from existing real estate taxes?

China has had a tax on the ownership of buildings based on the original purchase prices since the 1980s. After years of soaring home prices, early buyers are paying much less tax than people who bought the same properties much more recently. In addition, houses occupied for non-business purposes are exempted from the tax.

However, Shanghai and the southwestern megacity of Chongqing have since 2011 expanded the tax to cover all houses -- including residences of their owners -- in their cities on a trial basis. The expansion of the levy did not have the expected effect of drastically curbing growth in home prices.

A separate tax on urban land use is currently levied on property owners in the country. The tax is calculated by multiplying the size of the land being used by a specific tax rate. The rate varies in different cities and inside the same city. The new property tax regime will combine the aforementioned two taxes.

There are other real estate-related taxes, most of which get levied during the construction and transfer of properties. They will be “properly reduced” after the new tax becomes effective, Xiao said. These levies include the farmland occupation tax, urban land-use tax, land value-added tax, deed tax, corporate income tax, personal income tax and stamp duty.

How is the new tax calculated?

Xiao said the new tax will be calculated based on the property’s appraised value, but he didn’t specify how the assessment will be conducted.

Tax officials in 2004 started a pilot program to use a simulation-based appraisal model to determine a property’s valuation. Since 2010, the program has been expanded to include areas where the housing market is more developed.

The central government is expected to grant local authorities the power to set property tax rates and design exemption requirements based on local market conditions.

When will the tax be implemented?

The government has not clarified a date for the implementation of the new property tax. But major changes to China’s tax system could take place in 2020 according to the authorities’ reform and legislation agendas.

That is the year outlined in a plan passed in 2014 by the party’s policymaking body, the Politburo. It said “modern fiscal and taxation systems” will be established by 2020. Then-Finance Minister Lou Jiwei said six taxes, including the new property tax, would serve as the focus of the reform.

Separately, the party at the Third Plenum of its 18th Congress in 2013 promised to “implement statutory taxation.” The policy requires all new taxes to be introduced only after laws governing them are enacted, and that existing taxes imposed according to government regulations must be specified in the law before they can continue to be collected. Fu Ying, spokeswoman of the National People’s Congress, or parliament, said in 2015 that authorities aimed to start enforcing statutory taxation by 2020.

In last week’s article, Xiao reiterated that target, and said the authorities will “make a great effort” to complete tax legislation by 2019.

The existing tax on building ownership, which is based on a decree issued by the State Council, China’s cabinet, could become invalid if it is not included in the law by 2019. The circumstances make it likely that the property tax will be introduced very soon to fill that vacuum.

Why do we need the new tax?

Because the new tax will increase the cost of owning property, some analysts believe it will discourage speculation and serve to constrain a real estate bubble. At one point, the government also claimed that the new tax would help contain rising housing prices.

However, the trials in Chongqing and Shanghai have shown that property taxes have had limited impact on real estate prices. The same has been true in other countries that have introduced real estate taxes. Beijing has downplayed that narrative since 2010.

Since then, the central government has been emphasizing that the new tax will provide cash-strapped local and regional governments with a stable source of income.

Also, the new tax appears more urgent, as the government last year expanded the value-added tax to more sectors to replace the business tax — a major source of revenue for local and provincial governments.

Are there obstacles to the introduction of the new tax?

Local authorities have been reluctant to support the new tax. They are worried it will hurt demand for land and cause property values to fall.

Also, the new policy may actually reduce local income in the short run. Some research estimated that income from the new tax could be less than revenues from land sales, at least in the near term. Some local officials, possibly acting out of self-interest, prefer the old regime because quick lump sums from land sales improve their short-term performance.

There are technical difficulties too to implementing a property tax. These challenges include determining how to ensure proper declaration of property ownership, how to coordinate and share data between government agencies, and how to develop an independent and effective property appraisal system and dispute settlement mechanism.