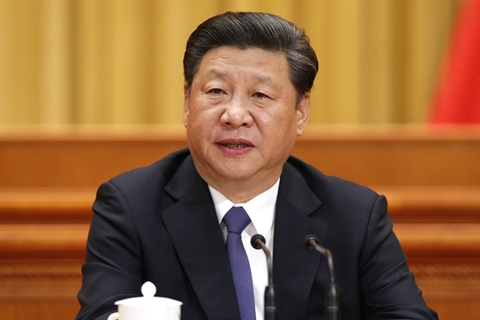 The Central Economic Work Conference said the economy would be developed based on “Xi Jinping Thought on Socialism With Chinese Characteristics for a New Era.” Photo: Xinhua

“China's economy has transitioned from a phase of rapid growth to a stage of high-quality development,” said a conference statement released by the official Xinhua News Agency. “China will further its supply-side structural reform in the coming year with more effort to improve economic quality.”

The conference vowed to continue the shift in the economy from “Made in China” to “Created in China,” as the country reinvents itself from the world’s factory to an innovator in artificial intelligence, mobile pay services, electric vehicles and the like.

It also pledged to continue to wring out excess industrial capacity, support the high-tech sector, reduce costs in the real economy, and “put the floodgate of money supply under control,” the statement said, signaling a tightening bias in monetary policy in 2018 as regulators continue with efforts to deleverage the economy.

The three-day, closed-door meeting in Beijing came on the heels of the ruling Communist Party’s National Congress in October, a gathering held once every five years at which the country’s top leadership lineup is unveiled. The economic conference looks at policy priorities and sets goals for the coming year, mapping out China’s fiscal and monetary policies.

The conference said the economy would be developed based on “Xi Jinping Thought on Socialism with Chinese Characteristics for a New Era,” which features innovative, coordinated, environment-friendly, open and shared development, according to Xinhua.

Investors and China watchers closely study the economic conference for signs of government policy that could hugely impact financial markets and private and state-owned enterprises.

Rapid growth has been central to China’s economic policies for decades. And even though China’s growth no longer hits the eye-watering numbers in decades ending in 2011, the economy is still expected to end the year above the government’s target growth rate of “around 6.5%” set in March, boosted by stronger exports and a rallying manufacturing sector.

Now China’s leaders are less focused on achieving colossal growth numbers, instead aiming for quality growth, which includes a heavy emphasis on cleaning up choking air pollution, toning up state-owned enterprises and reducing risks in the financial system.

Lessening the priority of high growth targets – the center of the nation's economic policies for decades – indicates that the central government is shifting its focus from keeping high growth rates to enhancing the quality and structure of the economy, said Chen Jianheng, a fixed-income analyst at China International Capital Corp.

The policy shift will take pressure off local authorities to invest and borrow blindly to boost growth, Chen said.

The signals sent by this week’s economic conference were in line with predictions by analysts that China’s top policymakers would set a lower and less rigid gross domestic product (GDP) target for 2018.

The economic conference usually decides on a growth target for the coming year, which is then formally announced by the premier at the National People’s Congress – China’s parliament – in March. The economy only needs to grow 6.3% annually to achieve the government’s goal of doubling GDP in 2020 from a decade ago, UBS economist Wang Tao said in a report earlier this month.

In addition to reducing financial risks and other major tasks internally, the country faces complicated external challenges. These include the quickly moving tax overhaul by U.S. President Donald Trump, which could take a bite out of China’s attractiveness as an investment destination and potentially lead to capital outflows.

The conference said China will maintain a prudent and neutral monetary policy stance in the coming year, which is in keeping with the message over the past seven years. Policymakers reiterated support to develop key sectors via fiscal measures while strengthening oversight of government spending and borrowing activities.

Niu Li, an expert at the State Information Center, a government think tank, said the central government will continue cleaning up excessive government borrowing and debt overhang, which will squeeze capital supply for some local infrastructure investments.

Chen expects the monetary authority to stick to a tightening stance, which may lead to slower growth in credit supply and social-financing activities next year.

At the conference, policymakers hammered out “critical battles” for the government over the next three years: preventing major financial risks, improving poverty alleviation and fighting pollution, the statement said.

To defuse major risks, China will maintain a tough stance on irregular and illegal activities in the financial sector, according to the statement.

China will also address people’s desires for improvements to their overall well-being, such as in education, employment, pension insurance and medical care, the statement said.

In a housing market in which prices have skyrocketed, the conference pledged to set up a long-term mechanism to ensure housing supply, including more rental options.

Policymakers said China will further open its economy and speed up economic reform. Niu expected the government to step up efforts to protect property rights to encourage private investment and continue the shakeup of the state-owned sector to better allocate resources and improve the efficiency of the economy.