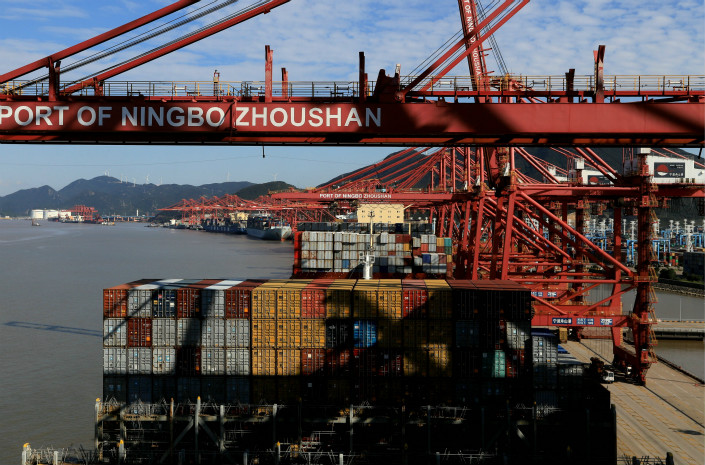 The practice of comparing the value of Chinese goods against prices in third countries “must be stopped strictly according to the agreements of China’s entry into the WTO,” a Foreign Ministry spokesman said, adding that “all WTO member states should live up to their commitments.” Photo: Visual China

China has urged its trading partners to stop using third-country price comparisons to calculate anti-dumping tariffs on Chinese imports regardless of whether its economy qualifies for market economy status.

Geng Shuang, a spokesman for the Foreign Ministry, made the call on Friday after the U.S. announced that it had submitted a statement to the World Trade Organization (WTO) opposing China’s demand to be treated as a market economy in anti-dumping investigations by other countries. He said treating China as a “non-market economy” was a concept invented by some trading partners rather than a rule within the multilateral framework of the global trade body.

The practice of comparing the value of Chinese goods against prices in third countries “must be stopped strictly according to the agreements of China’s entry into the WTO,” he said, adding that “all WTO member states should live up to their commitments.”

“It has nothing to do with whether China meets the standards of being granted market economy status,” he said at a regular briefing. “Some countries and people attempt to link the two issues to intentionally confuse” the international community, he added.

One of the conditions China agreed to when it joined the WTO in 2001 was to be given the status of a “non-market” economy for 15 years, allowing other members to assess Chinese imports based on prices in a third country. The rationale was that the subsidies many Chinese companies received from the government helped them keep their prices artificially low and thus allowed them to undercut domestic competitors in other markets. This violated anti-dumping rules and opened the door to punitive import tariffs on Chinese goods sold overseas.

The Chinese government has complained that this has led to unfairly high anti-dumping duties on the country’s products and has always insisted that the practice end by Dec. 11, 2016 — the 15th anniversary of China's accession to the WTO. But some major trading partners, including the U.S., the European Union and Japan, have refused to do so.

As a result, China officially launched a dispute settlement case at the WTO on Dec. 12, 2016 by requesting consultation over the issue with the U.S. and the EU.

A hearing on China’s case against the EU will be held in Geneva next week. The U.S. announcement on Thursday, which marked the first time Washington had publicly declared its position, signals the administration of President Donald Trump is likely to take a tough stance on China.

Some analysts said signals sent by the ruling Communist Party at its 19th Congress in October, a key meeting where President Xi Jinping laid out his vision for the country over the next three decades, may have increased foreign concerns that the government will take a greater role in managing the economy despite its pledge to embrace globalization and shun protectionism.

“In the wake of the commitment at the 19th Congress to cement ‘socialism with Chinese characteristics,’ notably a strong role for state-owned enterprises as pillars of the economy and adherence of all of them to party leadership, politicians and business people outside of China are increasingly wary of facilitating such further integration,” Louis Kuijs, head of Asia economics at research firm Oxford Economics, told Caixin.

“Many feel that the current international trading and investment system was not designed with economies in mind such as the one that China’s leadership aims for.”