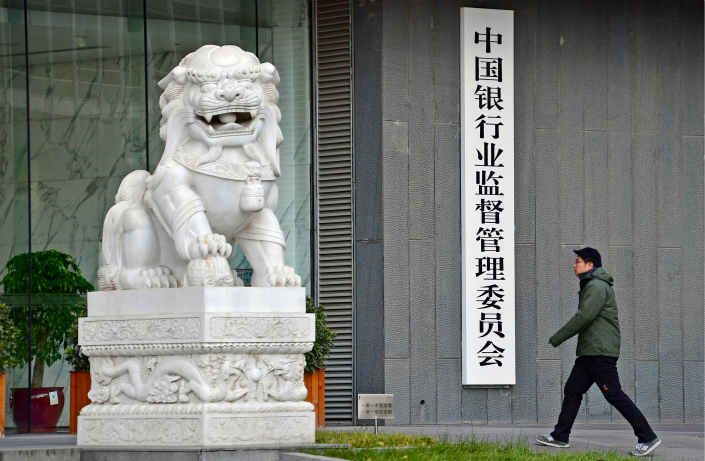 The China Banking Regulatory Commission will prioritize the regulation of interbank, wealth management, off-balance-sheet and shadow banking businesses this year as it deepens the financial deleveraging campaign, it said in a statement. Photo: Visual China

China’s banking regulator has said it will intensify its crackdown on lender misconduct in 2018, with a focus on interbank deals and “shadow banking,” warning that the country still faces “complicated and grave” potential financial risks.

The China Banking Regulatory Commission (CBRC) will prioritize the regulation of interbank, wealth management, off-balance-sheet and shadow banking businesses this year as it deepens the financial deleveraging campaign, the regulator said in a statement.

It will also strengthen supervision over banks’ shareholders and scrutinize lending to prevent funds from being used in ways that go against the government’s macroeconomic policies, according to the statement, which was issued on Saturday.

“The situation remains so complicated and severe that financial risks remain highly possible and there could be multiple outbreaks,” it said.

“The banking industry’s shareholder management, corporate governance and risk control mechanisms are still relatively weak, and the root causes behind the chaos in the market have not fundamentally changed,” the CBRC said. “Winning the battle against banking risks remains an arduous task.”

The regulatory body will target mainly eight types of banking misconduct this year. They include granting loans to industries such as real estate in violation of government policies; conducting illicit interbank, wealth management, or off-balance-sheet businesses; transferring benefits to shareholders or other stakeholders; and breaking rules to cover up or dispose of nonperforming assets, according to the statement.

Banks, local regions and business departments that have been prone to problems will be subject to more scrutiny. Leniency will be granted to those who take the initiative to discover and correct misconduct, while severe punishment will be meted out to offenders whose problems are uncovered by regulators, the statement added.

“Regulators at all levels should carry out on-the-spot inspections … and make sure that strict rules and discipline are enforced with an iron fist,” the statement said.

But it also pledged to leave room and provide a grace period for banks to deal with their existing problematic businesses to prevent “risks stemming from containing risks.”

Under its new chairman, Guo Shuqing, who took office in February 2017, the CBRC has targeted excessive leverage, off-balance sheet banking, and market misconduct as part of the government’s efforts to contain financial risks.

Banks’ interbank and wealth management businesses have thrived in recent years with little regulatory oversight. The CRBC is concerned these businesses have steered capital away from the real economy — the part engaging in actual production of goods and services, as opposed to investing in the financial markets — to risky and highly leveraged investments, heaping risk on the system.

Since March, the regulatory body has uncovered 59,700 instances of wrongdoing involving 17.7 trillion yuan ($2.74 trillion). Last year, it issued 2.9 billion yuan in fines to 1,877 banking institutions, it announced earlier this month.

Zeng Gang, director of banking research at the Institute of Finance and Banking under the Chinese Academy of Social Sciences, a government think tank, told Caixin that last year’s regulatory storm focused mainly on reducing funds from circulating within the financial system.

This year’s crackdown covers more areas, which will force “banks to further adjust their operating models and gradually abandon plans to expand in a way that does not comply with (the needs of) the real economy,” he said.