Asset Managers See No Gain, Only Pain in Proposed Rules 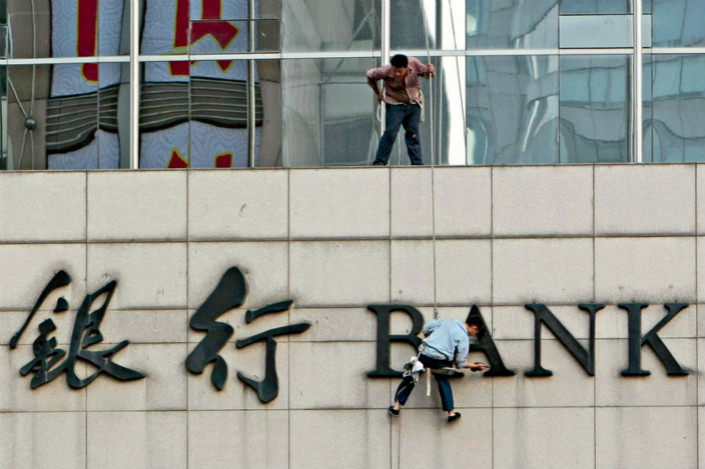 Despite growing complaints from banks, Chinese regulators are determined to get the asset management sector in line, even if it causes some pain. Photo: Visual China

China’s commercial banks are pushing back against recently proposed regulations for the country’s asset management industry, saying that the regulations will aggravate the very problem they are supposed to solve. But Chinese regulators aren’t budging.

The stakes are high in this ongoing debate between regulators and players in the country’s $15 trillion asset management industry. Commercial banks, which are also the country’s most profitable companies, have issued nearly 30 trillion yuan ($4.7 trillion) in asset management products, pouring much of that money into the mammoth, opaque and far-less-regulated “shadow banking” sector.

In most cases, channeling funds through the shadow banking sector allows them to circumvent regulatory requirements. The money often ends up invested in other parts of the financial system, such as brokerages, trusts, insurers and private funds. The situation has created a complex web of investments that exists outside the banking system, with much of it prone to growing leverage and liquidity risks.

Despite growing complaints from banks and other players, regulators are determined to get the sector in line, even if it causes some pain. “The new rules are definitely hurting,” an insurance regulator told Caixin. “But if you can’t bear a little pain now, you’ll have to bear a lot more in the future.”

On Nov. 17, Chinese financial regulators released a draft of unified regulations for the asset management industry. The draft regulations aim to create industrywide requirements for leverage ratios, risk reserve funds and investment restrictions, all in an effort to gets banks’ off-balance-sheet assets back under some kind of regulatory framework.

Another source close to the top securities regulator said the country’s creditability has been jeopardized by shadow banking activities, much of which has been operating under the guise of asset management. The source said it was time to get the risks under control.

Regulating the asset management industry was at the top of the agenda for the cabinet-level Financial Stability and Development Committee, which had its first meeting in November, a source close to the regulatory bodies told Caixin. Consequently, the regulators demanded prompt feedback from the industry. “The rules have to be rolled out as soon as possible, so we won’t tolerate any foot-dragging,” the source said.

It didn’t take long for feedback to arrive. On Dec. 7, a document from the China Banking Association began to circulate. The document, which asked regulators to water down the draft regulations, argued that the regulations would upset the industry and could threaten the country’s financial stability.

The China Banking Association quickly disavowed the document, explaining that it was a draft intended only for internal use. But by that time, a source close to the regulators had told Caixin that the regulators remained committed to tougher oversight of the industry.

Much of the debate has focused on the question of how long the asset management industry will have to prepare for the new rules. In its current form, the draft regulations call for a grace period that ends in June 2019.

Some in the asset management industry thought that might be a little soon. At a recent roundtable discussion between market participants and regulators, a senior executive of a state-owned trust company suggested that the regulators extend the transition period to eight to 10 years, Caixin has learned. The regulators at the discussion scoffed at the suggestion, saying that waiting that long would make the new rules meaningless.

In and of itself, this reliance on short-term funding is not a problem. But the banks are taking that money and investing it in nonstandard assets that might not pay off for three years, or even longer. This maturity mismatch puts banks at risk because if they can’t raise money by selling short-term asset management products, their source of steady income would disappear. That would put them under enormous pressure to sell assets to raise enough money to stay in business. This is the liquidity risk that everyone is talking about.

At present, the banks are still allowed to sell short-term asset management products, so the wheels continue to turn. But regulators want to put an end to the maturity mismatch by no longer allowing banks to roll over products that might not be in line with the proposed regulations. However, the banks believe that this measure will make it harder for them to raise money, potentially sparking the liquidity crisis that the regulators are trying to avoid.

“If the mismatch is not allowed, then banks will come under greater liquidity pressure than they will be able to stand,” said a source in one of country’s biggest lenders.

The proposed regulations also aim to deal with another issue plaguing the asset-management industry: the so-called implicit guarantee. This assumed guarantee stems from the notion that investors won’t lose money on a bad investment because the government will always step in to bail everyone out.

Most market players expect the government to continue its habit of bailing out banks and companies that go under, said Wu Xiaoling, vice chairwoman of the National People’s Congress Financial and Economic Affairs Committee.

However, this notion is a source of instability. It encourages the financial system to make riskier and riskier investments because there’s no apparent downside. “All financial risks will ultimately end up shifted to the government,” Wu said at a government conference in September.

The situation has already put a strain on the government, Wu said. China’s government expends too many resources on maintaining financial stability while failing to resolve the underlying causes of instability.

Wu suggested the government put more effort into serving qualified investors, and let the misbehaving ones bear more of the risk. “Investors won’t learn much if you don’t make them pay,” she said.

This idea has been met with resistance from the asset management industry. “It has been nearly 70 years since the country was established, and now you tell individual investors that wealth management products can’t be bailed out?” said one general manager of a trust company, who wasn’t shy with the sarcasm.

Still, the manager’s point was that market players have grown accustomed to the way things are, and it may be hard for them to change. “There’s a lot of risk” to getting rid of the implicit guarantee, the general manager said.

The executive also hinted at the possible repercussions to the change, specifically mentioning lawsuits and public demands for compensation.

As banks continue to fret over the draft regulations, some have taken defensive action. Several banks have started to issue wealth management products that mature in two to five years, far longer than the current standard of six to 12 months.

Some see the debate as the typical back-and-forth between the regulator and the regulated. Caixin has learned that regulators said they would consider extending the grace period for compliance until the end of 2019 and plan to conduct a thorough investigation into the underlying assets of banks’ asset management products.

But the regulators appear determined not to compromise further. “Easy money has been earned for years, and now the irregularities are filling the market,” one regulatory official said.

“How can we allow the chaos to continue?” he asked rhetorically.