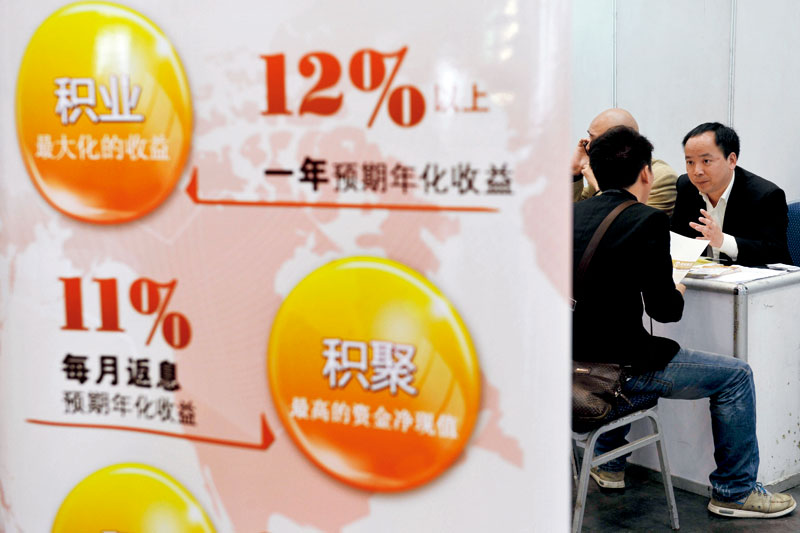 Trillions of yuan have poured into the asset-management business, as retail investors snapped up the short-term, high-yield investment products. Above: A bank employee markets wealth-management products to a client. Photo: Visual China

Chinese regulators are determined to tame the wild west of the country’s $15 trillion asset-management industry through overarching rules, brushing aside resistance in the market, sources close to the regulatory bodies told Caixin.

“Some institutions are putting pressure on the regulator by all means to lobby for more relaxed regulations,” one source said. But the regulators are resolute in forging tighter scrutiny over the industry, the source said.

China’s asset-management industry has been rattled by rules proposed in mid-November by top financial regulators — the central bank and three commissions overseeing banking, securities and insurance — to try to rein in financial risks and curtail the rampant growth of the lightly regulated “shadow banking” sector.

The draft rules would cover the 29 trillion yuan ($4.4 trillion) of wealth-management products issued by banks, as well as the 17.5 trillion yuan of trust products and other asset-management plans sold by insurers, fund managers and brokerages. The new rules would set unified requirements on leverage ratios, risk reserve funds, investment restrictions and other operations related to such products.

The proposed rules are undergoing public comment until Sunday and would be fully implemented in mid-2019.

The asset-management business has exploded over the past decade, enticing mostly retail investors to put trillions of yuan into short-term, high-yield investment products. Most of the funds are channeled by financial institutions through complicated transactions to finance long-term projects or risky borrowing, brewing risks from mismatches between the duration of products and the maturity of assets. Meanwhile, most asset-management products are kept away from balance sheets and fall outside regulatory oversight.

Late last week, people in the market began circulating a document claimed to be a submission paper by 10 midsized commercial banks, asking the government to water down the proposed restrictions. Banks cited in the document included China Merchants Bank, Shanghai Pudong Development Bank, China Citic Bank and the Industrial Bank.

The document said some of the proposed rules “would have great impact on financial markets and may trigger systemic risks.”

The China Banking Association, which had chaired meetings for the 10 banks on the proposed rules, denied the document was a joint submission. But industry sources said it reflects the main views of the banks.

The document suggests relaxing the proposed rules to give banks more time to comply, as well as reducing proposed barriers to investing in “nonstandard assets,” and allowing privately offered funds to recruit more than their current limit of 200 investors.

Bloomberg News reported Monday, without citing sources, that Chinese regulators are considering extending the transition period for compliance to the end of 2020. And that the regulators might give banks more flexibility to roll over long-maturity asset-management products invested in nonstandard assets, which are illiquid assets that are not traded on the stock, bond or money markets.

But a source close to the regulators told Caixin that although the proposed regulations aren’t finalized, the regulators won’t change the overall direction toward tougher scrutiny.

Some details of the new rules may be adjusted but there will be little leeway, the source said.

“Banks and the whole financial industry will pay costs if the new rules are strictly implemented. But it is the debt they have owed,” said one industry source. The industry has been distorted by widespread irregular business operations and its growth won’t last as risks accumulate, the source said.