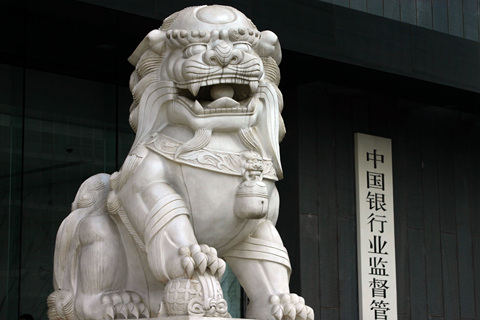 This year, China's banking regulator will continue its campaign of targeting misconduct to try to wring out risks in the system, sources told Caixin. Photo: Visual China

China’s top banking regulator launched a torrent of investigations and regulations in 2017 to try to tame the world’s biggest banking system — and the storm appears far from over.

Under its new chairman, the China Banking Regulatory Commission targeted excessive leverage, off-balance sheet banking activities, and market wrongdoing. The CBRC acted as concerns mounted over financial risks building up in the system.

Since March, the regulator has uncovered 59,700 instances of wrongdoing involving 17.7 trillion yuan ($2.72 trillion), it announced Monday.

Fines totaling 2.9 billion yuan were imposed last year on 1,877 banking institutions, according to figures released by the CBRC on Sunday. The biggest penalty — 722 million yuan (more than $100 million) — was slapped on China Guangfa Bank for fabricating guarantee documents.

The CBRC is determined to make "those who try to take advantage from regulatory loopholes unable to profit from such practices and strictly punish those who violate the rules," said one person close to the commission.

The commission will extend the regulatory campaign this year, targeting misconduct in interbank transactions, mostly bills and short-term loans;

wealth-management products, which are the major funding source for the “shadow banking” system by raising money from retail investors; and bankers’ acceptances, a short-term debt instrument issued by the company, sources close to the CBRC told Caixin.

Some banks have seen risks from a serious mismatch of assets and liability as they invested funds raised from short-term wealth management products to long-term projects or risky borrowers.

Of the near-60,000 cases of wrongdoing that the regulator says it found, 11,534 centered on industry rules and law, 4,060 on arbitrage that capitalized on uncoordinated regulations, 12,800 on improper business innovation and practices, and 31,300 on flaws in corporate governance, such as violations in ownership structure and investment activities, according to the CBRC.

In October, CBRC Chairman Guo Shuqing sent a warning to expect the crackdown to continue. “The trend of financial supervision is increasingly strict oversight and stringent enforcement of the law and regulations,” he said.

Guo took the helm in February of last year, pledging to tackle the “various phenomena of disorder” in the banking sector.

The effort got underway by late March and has focused on interbank and wealth management businesses that have thrived over recent years with little regulatory oversight. The regulator is concerned these businesses have steered capital away from the real economy — the part concerned with actual production of goods and services instead of investment in the financial markets — to risky and highly leveraged investments, posing risks to the system.

The CBRC has issued a slew of regulations to rein in risks from the loosely regulated shadow lending, wealth management products and interbank-market businesses, while stepping up inspections of suspected market wrongdoing.

On Jan. 5, the CBRC announced a set of new rules on off-balance sheet entrusted loans, in which a bank acts as an agent to facilitate a loan between two businesses, stepping up scrutiny of one of the main segments of the country’s shadow-banking industry.

In November, the CBRC along with the central bank and other regulatory bodies released proposals to calm country’s $15 trillion asset management industry and untangle the complex web of investments that exist outside the formal banking system.

Amid stricter oversight, commercial banks’ interbank assets and liabilities were reduced by 2.8 trillion yuan and 830 billion yuan, respectively, by the end of November from the beginning of the year, indicating shrinking off-balance sheet business, said a CBRC official.

“Over the past year, the CBRC has removed some hidden risks in the banking sector while encouraging banks to offer greater support to the real economy,” the CBRC official said.