Chen Xiaolu, Princeling Who Apologized for Cultural Revolution, Dies at 71

By Li Rongde and Liu Jiaying 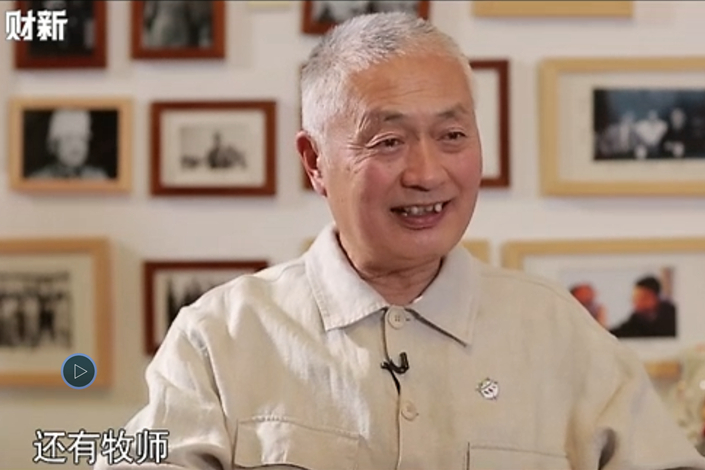 A video grab of a Caixin interview with Chen Xiaolu originally published in January 2015. Chen was catapulted into the limelight after admitting to humiliating his teachers during the Cultural Revolution Photo: Caixin

Chen Xiaolu, the youngest son of a People's Liberation Army founding marshal Chen Yi, died of a heart attack on Wednesday. He was 71.

Chen Xiaolu made international headlines five years ago after publicly apologizing for his role during the tumultuous Cultural Revolution. He died in an army hospital in Sanya, in the southern island province of Hainan, according to several friends.

Chen’s father, Chen Yi, was honored in 1955 as one of the “10 marshals” of the People’s Liberation Army for leading important victories that helped end the civil war between the Communist Party and the Nationalist Party in late the 40s, among other accomplishments. Chen Yi also served as China’s foreign minister from 1958 to 1972.

The junior Chen was catapulted into the limelight after admitting to humiliating his teachers and failing to speak out against inhumane treatment of scholars by the notorious Red Guard during the Cultural Revolution. The apology that gripped China was made during a visit to his former high school in Beijing on Oct. 7, 2013. It’s rare for individuals to admit to their wrongdoings during one of the darkest periods of modern Chinese history.

The Communist Party has never made a formal apology for what happened between 1966 and 1976, and a document issued at a high-level party meeting in 1981 only labeled it a “serious mistake.”

Chen said he wanted to deliver the long-overdue apology before it was too late. "People have dignity and rights that are protected by China's constitution," Chen told journalists in 2013. "I didn't know that back then."

Chen briefly worked for a party research group for political reform in the late 80s.

He also had a stint in the military and became a successful businessman after being discharged in 1992.

Since 2006, he has campaigned for a system of palliative care, which is recommended by the World Health Organization, but remains a rarity in China.

In 2013, together with several sons and daughters of other revolutionaries, he founded the Beijing Living Will Promotion Association, an NGO that advocates for palliative care under the slogan “Choice and Dignity.”

Chen said in an interview with Caixin in 2015 that his advocacy work was prompted by traumatizing memories of his father's final moments, when doctors tried repeatedly to resuscitate Chen Yi while his body was connected by numerous wires to medical devices.

“Every time his heart stopped, electric shock treatment made his body convulse,” he said. “It was painful to watch.”

Chen Xiaolu was recently dogged by controversy after media reports in 2015 hinted that he was the de facto head of Anbang Insurance Group Co. Southern Weekend, a Guangzhou newspaper, said he held a controlling stake in the company through three private firms, a claim Chen Xiaolu denied.

China’s insurance watchdog said late last month that it would take over the embattled insurer for a year to protect consumers’ rights, as the company struggles to pay back investors following a risky global acquisition spree in recent years.

Chen Xiaolu, once on Anbang’s board of directors, dismissed the 2015 reports, saying he had no role in Anbang’s management and that he didn’t have any shares in it or had ever been paid by the company. But he admitted to advising Anbang and attending events to promote its businesses.

Chen Xiaolu has two brothers and one sister and is survived by his wife Li Huining and son Chen Zhengguo, according to Luo Diandian, a close friend who cited an obituary notice issued by Chen’s family.