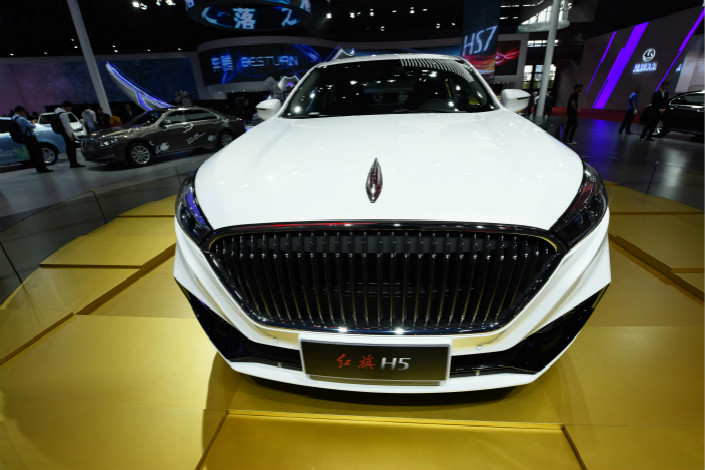 A Hongqi H5 is displayed during the 17th Shanghai International Automobile Industry Exhibition in Shanghai on April 19 2017. Hongqi accounted for only 4,452 out of 2.5 million luxury cars sold in China in 2017. Photo: VCG

Storied high-end Chinese car brand Hongqi has postponed the rollout of one of its new flagship models, amid a lackluster sales network.

The new H5 was originally expected to enter the market by the end of last year, but will not be available until at least April, a source close to the company told Caixin.

The decision was made by Xu Liuping, chairman of Hongqi parent FAW Group Corp., who said that the lack of an effective sales network has hindered the vehicle’s rollout, the source added.

Hongqi, which means “red flag,” is one of the best-known luxury car names among China’s older generation. Its passengers have included U.S. President Richard Nixon, who rode in one through Beijing during his historic 1972 trip to China. But the brand suffers from an identity crisis among younger consumers, who have grown up with far more choices offered by global automakers.

The sluggish sales have led to many dealers refusing to join Hongqi’s network or build more showrooms, according to the source.

Though Hongqi has promised to offer support for the construction of these showrooms, dealers must cover the initial investments, which pose financial risk, the source said.

Hongqi has also delayed its plan to have 100 showrooms by March to the end of this year, according to the source.

Hongqi — which currently only sells its H7 and L5 models — said in January it is planning to unveil four new products in the future. This includes the L line of luxury cars, the S line of sports sedans, the H line of “classic” models, and the Q line of business-targeted vehicles.

Addressing a question about its ambitious plans, Xu responded, “We have to seize the moment in China’s luxury car market for the next five to 10 years.”