By An Limin and Teng Jing Xuan 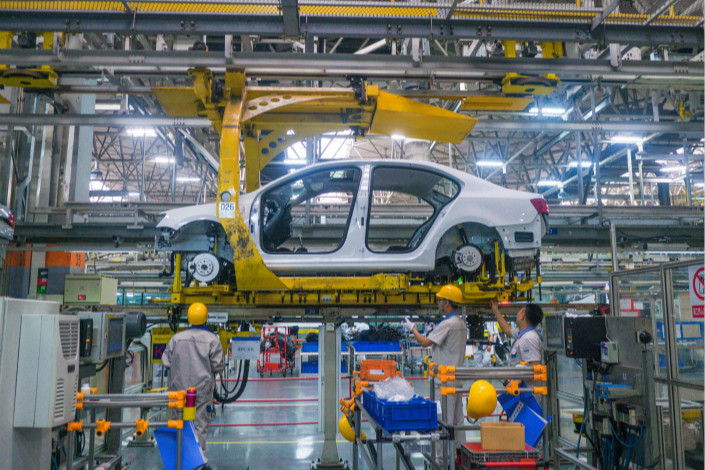 FAW Group Corp. announced on Sept. 18 that all employees were to quit their jobs and reapply. Above, cars are made at an FAW automobile production line in Chengdu, Sichuan province, on May 5. Photo: Visual China

The company announced at a management meeting on Sept. 18 that all FAW employees, including those working for the group’s subsidiaries, were to quit their positions and reapply for their jobs, Caixin learned.

Later that day, the company began to fill the vacated positions, with employees being allowed to apply for roles in other departments if they stayed within their former pay grades. In the meantime, the company trimmed the staff count of certain departments while expanding others, sources from FAW said.

Some departments had finished rehiring personnel as of Monday, while others are still going through the process, the sources said.

The automaker’s large-scale reshuffle comes on the heels of similar, if smaller, changes at other state-owned companies trying to cut bloat and increase competitiveness.

Train-maker CRRC Corp. Ltd. appointed a new president on Thursday, while state railway operator China Railway Corp. announced on the same day that it had replaced a number of high-ranking staff at its regional bureau in Zhengzhou, a major rail transport hub.

FAW’s personnel overhaul, unprecedented in the company’s 64-year history, is the work of new Chairman Xu Liuping, who joined the group only in early August after stints at other state-owned automakers China South Industries Group Corp. and Changan Automobile Co. Ltd.

Xu is attempting to complete the kind of overhaul that previous FAW chiefs have tried and failed at, multiple FAW staffers told Caixin.

Over 6,000 employees have gone through the rehiring process so far, and the total number could exceed 10,000, the FAW sources said. But not every former employee will find a new position.

“Layoffs aren’t the reason for the reshuffle, but they will be a byproduct,” an FAW executive told Caixin.

FAW, based in Changchun, Jilin province, also adjusted its company structure in the process. Hongqi, the luxury car marque owned by FAW’s Shenzhen-listed subsidiary FAW Car Co., will now be directly operated by the parent group, according to an adjustment plan seen by Caixin. Meanwhile, existing units FAW Car Co., Tianjin FAW, and FAW Jilin will be integrated under the Besturn brand.

Some departments have even shifted their physical locations. Two buildings originally occupied by FAW Group’s head office will now be home to truck-maker subsidiary FAW Jiefang.

“The personnel hiring team has hardly slept these past days, with things moving so fast,” a FAW staffer told Caixin, adding that some of the results of the rehiring process were announced on Sept. 18, the first day of the reshuffle.