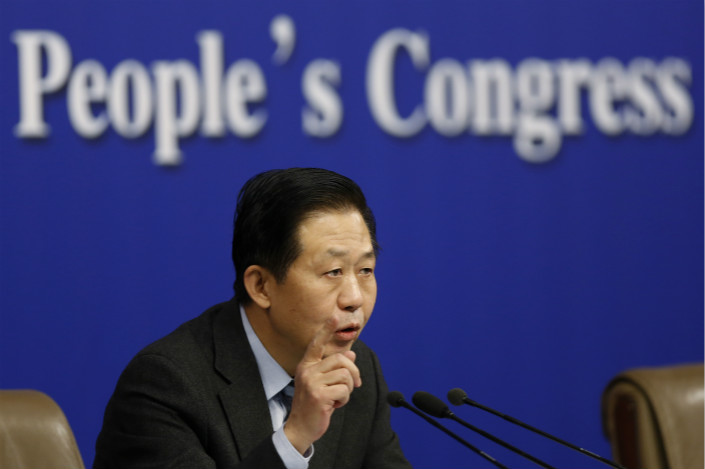 Finance Minister Xiao Jie talks to reporters during a news conference on the sidelines of the National People's Congress at the media center in Beijing on Wednesday. Xiao said China will continue expanding government spending to facilitate economic reforms and social welfare programs. Photo: IC

The reduction of the deficit target coincides with the country’s steadily progressing economic and fiscal performance, Xiao said on the sidelines of the ongoing annual meeting of the National People’s Congress (NPC), China’s top legislature.

In addition, China will slash ineffective and inefficient government spending in order to make better use of fiscal funds, he said.

According to the government work report released on Monday, China has set its 2018 spending target at 20.98 trillion yuan, up 7.6% year-on-year and 1.5 percentage points higher than the growth of its revenue target.

Meanwhile, China aims to reduce taxes on enterprises and individuals by over 800 billion yuan, and ease the nontax burden by over 300 billion yuan in 2018, with the goal of facilitating greater corporate profit and more vigor in the market, said the report.

The report mentioned that China is considering a nationwide rollout of a pilot program of tax incentives for venture capital activities. The program, tested last year in nine areas, including the Beijing-Tianjin-Hebei region, Shanghai, and Guangdong province, allows 70% of an investor’s total equity investment to be offset against their taxable income.

Xiao said there won’t be a significant change in the Chinese government’s debt ratio in the coming few years compared with 2017. According to the government work report, China's debt-to-GDP ratio was 36.2% by the end of 2017, down from 36.7% in 2016, with the total outstanding government debt reaching 29.95 trillion yuan.

The Finance Ministry and the Budgetary Affairs Commission of the NPC Standing Committee, along with other related departments, are now jointly drafting a law on a real estate tax, Deputy Finance Minister Shi Yaobin said.