Why is U.S. Hedge Fund Manager Treated Like a Rock Star in China? 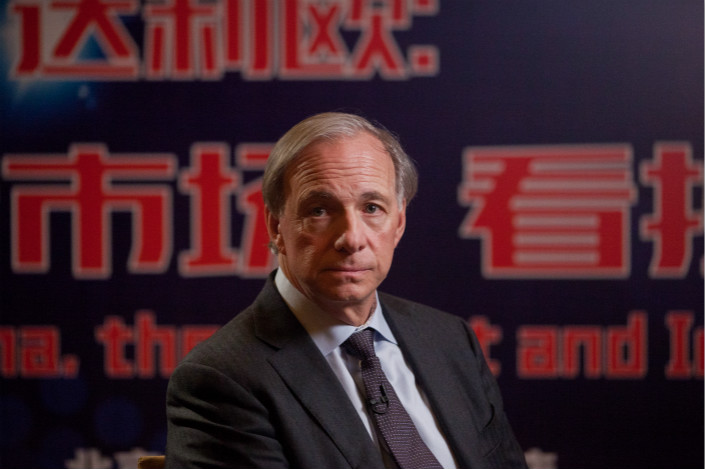 Ray Dalio, billionaire investor and founder of Bridgewater Associates, pauses during a Bloomberg Television interview at the Grand Hyatt in Beijing on Feb. 27. Photo: VCG

Chinese bankers and finance professionals have been chattering about Ray Dalio, founder of the world’s largest hedge fund, in recent weeks after the local version of his memoir “Principles” hit the shelves of Chinese bookstores.

Many have been sharing power-point presentations and speech transcripts of the 68-year-old founder of Bridgewater Associates, who has built a cult following in China over the past decades. Dalio shot to fame on Wall Street for his Midas touch, especially during and after crises.

He was in China in late February, to talk about the game-changing principles that underpin his firm, which manages over $160 billion yuan worth of assets across the globe and has raked in nearly $50 billion in profit since its establishment in 1975.

In his weeklong China tour, Dalio pushed for what he called “radical transparency.” He spoke of a machine-learning-like decision-making process, or algorithm of sorts, in which he encouraged the audience, local competitors and up-and-coming young professionals, to search for the “truth,” and never stop perceiving, diagnosing and solving problems and making improvements based on former failures.

The essence of his principles, first published on Bridgewater’s website in 2011, and the corporate culture they have helped create, has been labeled the “Bridgewater cult” by the media at times. In a famous episode shared by a New York Times reporter, the hedge fund billionaire videotaped nearly everything as part of the company’s database of future case studies, and once shared a video clip in which a fierce internal debate pushed a female staff to tears.

He said in a Shanghai talk on March 1, surrounded by local admirers, that the methods used at Bridgewater highlighted “the powerful force of fairness” that could “tremendously motivate a young person to make right decisions,” as if any emotional fluctuations are just a part of an algorithm that needs to be conquered and modified.

“I just want the best ideas to win,” Dalio said.

Not everyone is convinced by the “algorithm” for success proposed in his 123-page manifesto.

However, that hasn’t stopped Dalio from becoming a role model for China’s finance industry, and he is among a few foreign finance-consultants who are in frequent touch with top Chinese policymakers and leadership.

Liu He, the top economic adviser to President Xi Jinping, cited Dalio’s article titled “The Beautiful Deleveraging” in the his award-winning paper “Comparative Study of the Two Global Crises” in 2012, to describe the public and private deleveraging process that needs attention of Chinese government.

To better understand his philosophy and advice for China, Caixin sat down with Ray Dalio at the World Economic Forum in Davos, Switzerland in January, to discuss his views on the Chinese leadership, economic outlook for the country and the U.S. economic environment. The following are excerpts of that interview.

Ray Dalio: I think Liu’s speech is a very important and very realistic speech. He is a man who has both the wisdom for seeing things through time economically, and a very practical understanding of how things work.

He refers to productivity over a period of time and the debt cycle, because he knows that both exist and how they relate to each other and he wants us to keep them both in mind.

While productivity growth is continuous, debt cycles happen over periods that last 1 1/2 to 3 years and then frizzle out. So, we will probably see debt management adjustments last for about 1 1/2 to 3 years. They are very manageable when the debt is in one's own currency, and the government has a lot of authority to make decisions to manage the issues well, which is the case for China.

I think the objective now is, and the objective should be, to put in place better controls for irresponsible lending activities. That is healthy in the long term, while it will slow lending to those areas of the economy that received that money. The key is to balance that with lending growth and economic growth elsewhere in the economy in order to achieve acceptable economic growth, while debt restructuring takes place.

China’s financial regulators have been very active in terms of tightening rules on shadow banking activities. How do you view the task of controlling financial risk?

They allowed rapid uncontrolled development. Rapid growth was good for the development of credit markets to bring credit to segments of the economy that couldn't get it and to improve the returns of lender, but lack of controls led to a lot of bad sales and lending practices. This is the sort of two steps forward and one step back evolutionary process.

The actions now being taken will leave China with a much better developed and safer capital distribution system that got that way very fast, with some imperfections.

Your four ways of deleveraging are well known. Do you think in the short- to medium-term, China’s leverage ratio can be decreased, or only its growth rate can be controlled?

In looking at debt ratios, I suggest you can't look for averages. You have to look at them sector by sector, or entity by entity. Some areas will need to have declines in their debt ratios and others can and should have debt increases to fund development. For example, the old industries — cement, coal, heavy industries — and even local governments are in one condition.

Meanwhile, there are a number of areas that are emerging well in China, such as technology and infrastructure in less developed parts of the economy. So the key is to handle each of them appropriately, to change the mix well rather than watch the overall number. The adjustment can be spread over time. Nothing has to be abrupt, so growth in some parts of the economy can be engineered to pick-up, while there is more restraint in other parts.

Each restructuring is like a delicate surgery, like a heart transplant. Nowadays, if you have a heart transplant it isn’t risky; you're probably going to survive, but you will be weak for a while, but it has to be done well. Doing a number of such surgeries is complicated.

For example, dealing with local government debt requires thoughtfulness. The question is not just how to deal with debt that has been accumulated, but also the flow of credit and curtailing spending and would that decline in spending be too traumatic to bear. In other words, if you cut the flow of credit to local governments because it was too much to pay back, in order to make debt growth sustainable, the spending that supported employment will have to decline and that can create a problem. So a lot of thought will have to go into managing trade-offs to get the balance right.

What I described are circumstances that were faced in many countries by many different economic policymakers.

How do you see China’s attempts to open up its financial markets and what are your plans in China?

We will enter as quickly as possible once we are allowed to enter, and only invest for institutional investors. In most other countries, we manage local investors outside the country, foreign investors into the country, and locals in the country who want to invest in the country. We would like to do this in China as well.

I've been coming to China since 1984. I've been involved in China’s capital market development since roughly around 1989. I would like to be, in my lifetime, part of that, and do it responsibly.

But it's very important to us that we operate with respect and within the regulations, so that we're good (corporate) citizens in China. It will be up to the Chinese leadership to decide the pace that they think is good, and we will follow that pace.

With U.S. Treasury bonds perhaps losing their attractiveness of late, should China move toward equity or alternative investments to manage its large foreign exchange reserve?

The advice I would give to China is it's important to have a well-balanced portfolio. There's too much of a concentration around the world in dollar-denominated debt. This is because the dollar is the main reserve currency, that developed with the Bretton Woods Agreement from 1944 and onwards, but it's now an anachronism.

I would say the same thing for China, there's too much of a concentration in one thing that probably won’t be so good.

How do you see the health and strengths of the U.S. economy at the present?

The averages are now good, meaning average unemployment is low, the economic growth rate, which is a little bit below 3%, by our standards is good, and stability exists, and we've restructured some of our debt that is all good.

To give you an example, the top 0.1% of the U.S. population’s net worth is equal to the bottom 90% combined. The majority of the people at the lower end are not experiencing any growth or the benefits of it.

The bottom 60% to 80% of the population has not had income growth. They have bad conditions, rising death rates, from opiates and from suicides. The middle class is affected in various ways. In my opinion, that's a big issue.

What’s the impact of this growing inequity?

This will be a particular concern for the next economic downturn.

If you go look at history, when you have a big disparity between the rich and the poor, and they share a common budget, meaning they have to divide the pie, and you have an economic downturn, you’ll have tension, you’ll have clashes. With technology progressing so fast, it’s particularly challenging.

So you can't let the economy go down, and you have to deal with that disparity so that you have cohesiveness. You'll have to make the system work for everyone.

It is not only an issue for the U.S., it is also an issue for China, because the nature of what's happened with the market economy with Chinese characteristics is producing that particular dynamic.

For all countries in history, for China, for the U.S., if you have a big gap between the rich and the poor, and you have a downturn, there'll be a lot of arguing, a lot of conflict of how to divide that p