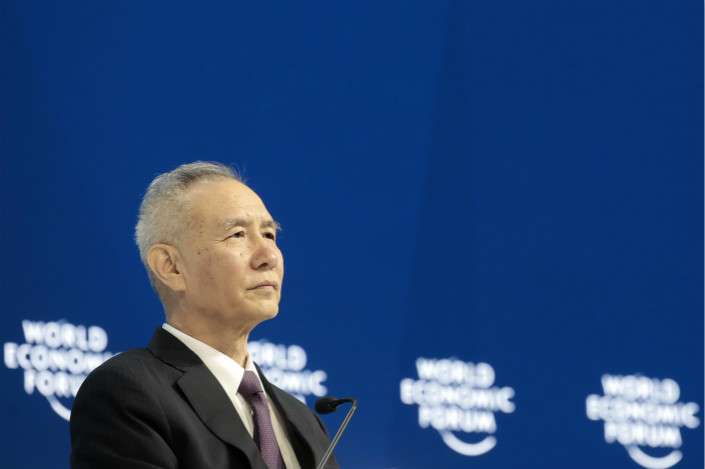 Liu He, director of a financial and economic affairs leading group of the Communist Party of China, at a special session of the World Economic Forum in Davos, Switzerland, on Jan. 24. Photo: VCG

Editor’s note: The international economic and financial communities have only recently gotten to know Liu He, after he became China’s top representative at the World Economic Forum in Davos, Switzerland in January, where he talked about China’s plans to further open its financial sector this year.

Now in Washington on a mission to defuse growing China-U.S. trade tensions, the key economic aide to President Xi Jinping and one of 25 top decision-makers in the Politburo of the ruling Communist Party is believed to be a rising star on China’s political and economic fronts. Observers say he is likely to be promoted to a key government position at the National People’s Congress in March to take care of the many tricky issues facing the country’s economy and financial system.

Although the 66-year-old is only now stepping into the global spotlight, he has a long-standing reputation at home as an influential economist and policy adviser.

Among the many research papers Liu has published over the years, one of his most renowned works was “Comparative Study of the Two Global Crises” in 2012, which analyzed the common characteristics and lessons for policymakers of the Great Depression, which started in 1929, and the global financial crisis that began in 2008.

In the aftermath of both crises, Liu wrote, governments faced three major challenges — populism, nationalism, and economic problems that were identified with certain political values or ideologies.

Liu also put forward measures for Chinese policymakers to deal with any future crisis: preparing for the worst possible scenario; grasping strategic post-crisis opportunities to drive global economic recovery; and prioritizing the domestic economy when implementing policy to deal with a crisis.

Liu’s paper was published in Comparative Studies, a bimonthly journal produced by Caixin Media and Citic Press Group that focuses on research juxtaposing economic and social issues and policies in China and other countries. His analysis gained recognition, and in 2014 it won the Sun Yefang Economic Science Award. Named after distinguished Chinese economist Sun Yefang, it is the country’s highest honor in the economics field and is given for outstanding contributions to economic science that promote the prosperity and development of China.

Caixin is publishing a two-part series of translated excerpts from the second, third and fourth chapters of Liu’s paper, which offer valuable insights into China’s policymaking in terms of domestic reform and the government’s battle to defuse risks in the financial system. They also shed light on China’s approach to international issues such as bilateral economic and trade conflicts. Part 1 is published here, and Part 2 will follow on Wednesday:

Differences Between the Two Crises

In terms of their initial impact, the Great Depression of 1929 resulted in far greater losses to economic growth and business than the 2008 global financial crisis. But the recent crisis has played out in a more complex way, with the U.S. unemployment rate at around 9% for more than two years, home prices still depressed, and the recovery process full of twists and turns.

The demographic structure of a society, particularly its age structure, is essential to economic and social development and plays an important role in a government’s public policy. When the Great Depression hit, the population was generally younger, and the middle class was smaller, with a lower level of education. In the 2008 crisis, the population was much older, and developed nations in particular were facing aging societies. Welfare systems and the age factor weakened the labor force’s ability to adapt to changes in the market, and people were more willing to accept the status quo rather than change.

The Great Depression erupted after the second technological revolution, while the latest crisis happened following the third. Both led to a significant enhancement in human technological progress across the world. But the recent financial crisis took place against the backdrop of sophisticated information technology, which enabled the crisis to spread more rapidly and more widely, giving rise to greater market volatility.

3. Evolution of economic and social systems in the developed world

In the wake of the Great Depression, most capitalist countries set up social security systems drawing on the doctrine of socialism. The practice of macroeconomic management came into being and has continued to be improved upon, and a system of stabilizers and brakes was put in place to safeguard economic and social development. After the 2008 global financial crisis, governments of major developed countries, drawing lessons from the Great Depression, carried out rapid and direct intervention in their economies, which helped arrest the free-fall in a relatively short period of time.

The old gold-standard system has been replaced by a managed floating exchange-rate system; capital markets have opened up to a much greater extent; and cross-border investment has become prevalent. The global presence of multinational companies has made the interests of individual countries more intertwined with those of other countries. Although we have seen the emergence of protectionism in some countries, it will be short-lived because it will damage the government of the country involved and hurt the interests of businesses and consumers.

5. The rise of emerging markets and changing dynamics in the global economy

The Great Depression was a crisis of the capitalist world that subjected less-developed countries to severe external shocks. They were helpless and had no strength to drive a global economy. But the 2008 global financial crisis was completely different. Structural shifts in the forces driving the global economy have meant that even as domestic demand in developed countries declined, new engines of economic growth emerged in the form of strong domestic demand from other countries,which helped support the global economy. The global financial crisis spread from the center to the periphery, but the power that the periphery refracted back to the center was enormous.

Similarities Between the Two Crises

In general, financial and economic crises are inherent features of the capitalist system. Since the Industrial Revolution, such crises have occurred frequently in capitalist economies. The Great Depression in the 1930s and the global financial crisis that began in 2008 had the biggest and most disruptive impact on the world, and both took place when problems in the capitalist system had accumulated to a point where they could not self-correct.

1. Both crises occurred after a technological revolution.

According to long-wave theory, technological innovation generates economic booms that in turn lead to recessions. The Great Depression of 1929 took place after the second Industrial Revolution, while the 2008 global financial crisis appeared after the “third wave” of technological innovation, which began in 1945. (The “third wave” refers to innovation in computer technology, aviation technology and nuclear power.) But the time it takes for a crisis to materialize after a technological innovation has shortened significantly — there was a gap of about 60 years between the revolution sparked by the industrial use of electric energy and the start of the Great Depression in 1929, but less than 30 years between the start of the IT revolution in the 1980s and the 2008 crisis.

2. Both crises were preceded by unprecedented economic booms in extremely loose regulatory environments.

During the two boom periods, the combination of economic liberalization and entrepreneurship led to high growth rates, but were also linked to subsequent distress. Notably, manufacturing was in decline in developed economies; growing numbers of workers were unable to adapt to the rapidly changing industrial structure in their countries; and the model of securing economic growth through high debt proved risky.

3. Widening income disparity was a forerunner to the crises.

Another common feature of the two crises was the concentration of wealth in the hands of a small minority of extremely rich people. The Great Depression highlighted the contradiction between private ownership and mass production that manifested itself in overcapacity and insufficient effective demand. The 2008 global financial crisis was closely related to globalization, the growth of the Internet and the knowledge-based economy, and growing economic and demographic changes in different countries.

Psychological stress brought about by technological change and widening income disparity bred public discontent. Faced with an inability to reform and the need to take elections into account, governments tended to offer populist policies to appease the public.

But promises held out by populist policies can change people’s expectations regarding their well-being, deepen their reliance on government, and weaken their determination to strive, which can have extremely disruptive consequences. Once expectations are not met, social psychology can quickly reverse direction, creating contempt for authority, rejection of change and resentment of success.

Moreover, countries have fallen into the habit of spending beyond their means, pursuing high levels of fiscal debt and welfarism. The destructive power of this habit is reflected in the European debt crisis. Ray Dalio, the founder of Bridgewater Associates, gives a brilliant description of the public and private deleveraging process in his article “The Beautiful Deleveraging.” Dalio argues that once every roughly 70 years, high debt levels are followed by an economic crisis, as wage growth outpaces productivity and the growth in liabilities significantly exceeds a country’s tax-raising capacity.

Part 2 of Liu’s paper will be published on Wednesday.