By Nerys Avery in London, Fran Wang in Beijing and Doug Young in Davos, Switzerland 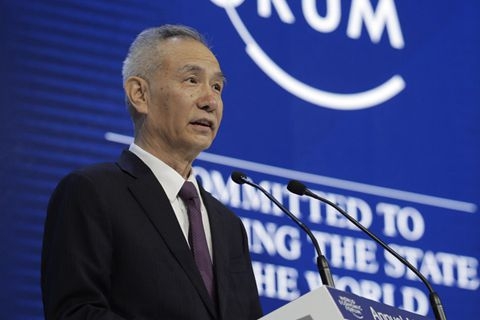 Liu He (above) told the Davos forum that China will implement further opening-up measures in banking, securities and the insurance sectors this year. Photo: IC

China will implement measures this year to meet a commitment announced in November to give foreign investors greater access to its financial sector, Liu He, a key economic adviser to President Xi Jinping told the World Economic Forum in the Swiss town of Davos.

“We have pledged further opening-up measures in banking, securities and the insurance sectors,” Liu, a member of the Politburo, a group of the 25 most-senior officials of the ruling Communist Party, said in comments made after his main speech. “As far as I’m concerned, many foreign friends want to know when these measures will materialize. I would state in a responsible manner here, that we will implement these measures one by one this year, the earlier the better,” he said, without giving further details.

Liu also flagged that other policies will be announced this year to mark the 40th anniversary of the country’s reform and opening-up strategy, which propelled China from a global minnow to the world’s second-largest economy, largest energy consumer and biggest exporter of goods.

“We need to celebrate the anniversary of (the start of) reform and opening up policy and the best way to commemorate the occasion is to roll out new, more aggressive reform measures,” Liu said. “The central government is undertaking careful studies of the new measures. Here let me tell you in a responsible manner that some measures will exceed the expectations of the international community.”

He pledged that China will continue to open up its manufacturing sector and some services industries and remove or reduce restrictions on foreign investment. He also said the government would work to strengthen protection of intellectual property and increase imports. Tariffs on imported automobiles will be gradually reduced and the country’s first international import expo will be held in Shanghai later this year.

Although an unfamiliar face on the international stage, Liu is one of the most senior members of China’s ruling Communist Party. An economist who helped draft several of China’s Five-Year Plans, Liu has been a member of the party’s Central Committee, a political body comprising the country’s top officials, since 2012. At the 19th Communist Party Congress in October, Liu was elevated to the Politburo.

Liu is a vice chairman of the National Development and Reform Commission, the country’s powerful economic planning agency. He is also director of the General Office of the Central Leading Group for Financial and Economic Affairs, a group that reports to the Central Committee and is responsible for leading, coordinating and supervising the economic work of the Party and the government. Liu has an economics degree from Renmin University of China and gained a Master’s degree in Public Administration from Harvard University in the 1990s.

The Chinese government announced plans to open up the financial sector wider to overseas investors on Nov. 10 at the end of U.S. President Donald Trump’s state visit to Beijing, pledging to create a more level playing field for foreign firms in the country’s sprawling financial sector. Foreign financial institutions have long complained about limits placed on their activities in China and have campaigned for more access and for control over their joint ventures.

The proposals involve a significant relaxation of foreign ownership rules on banks, securities and asset management companies, and insurers. The government will raise the cap on direct or indirect foreign ownership of securities companies, fund management companies and futures companies to 51% from 49% currently and will abolish the limit entirely three years after the rules come into force.

But no timetable was given and no further details have been forthcoming since the original announcement back in November, although at the time, Vice Finance Minister Zhu Guangyao said the changes would take effect “very quickly.”

Many foreign banks and insurers have already expressed an interest in taking a majority stake in their Chinese joint ventures, including Swiss banking giant UBS Group.

In addition to offering some hope to the leaders of Western banks and financial institutions, Liu also reiterated the commitment made by President Xi in his speech at last year’s World Economic Forum to fight protectionism and support economic globalization to make it more open, inclusive and balanced. Xi, the first Chinese president to attend the World Economic Forum, defended globalization and pledged China’s commitment to an open economy.

Liu made no reference to U.S. President Donald Trump’s protectionist trade policies and his decision to withdraw from the Paris climate agreement. But he called on governments around the world to work together to combat global challenges such as climate change, disruptive technologies and terrorism. He also urged the international community to make joint efforts to deal with the risks posed by high debt levels, asset bubbles, protectionism and escalating international and regional tensions in order to ensure sustainable global growth.