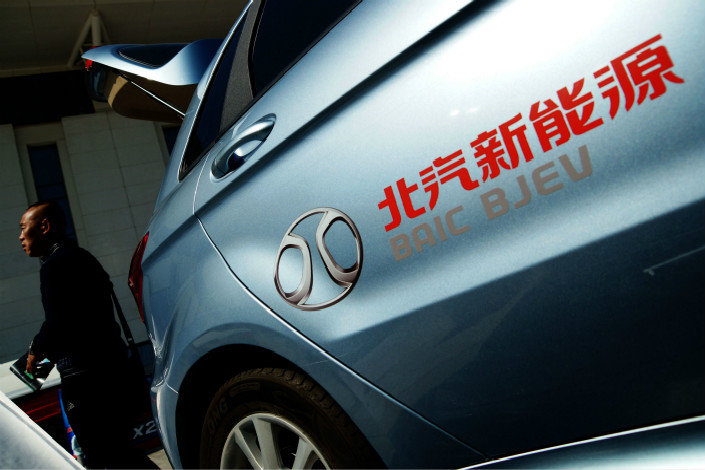 A BAIC Motor E150 new-energy vehicle is displayed in Tianjin. BAIC new-energy vehicle sales accounted for around 13% of the 777,000 units sold in China in 2007, according to data from the China Association of Automobile Manufacturers. Photo: Visual China

State-owned BAIC Group has announced plans to list its electric vehicle unit on the Shanghai Stock Exchange via an asset-swap program.

According to the plan, QianFeng will sell 761.1 million shares at 37.66 yuan each to BJEV’s shareholders and others to complete the acquisition.

The deal comes at a time when investors including startups, internet companies and real-estate developers, are rushing into the emerging electric vehicle industry in the world’s largest auto market.

BJEV, which was founded in 2009 and received its independent permit to make electric vehicles in 2016, has become China’s second largest new-energy vehicle producer, following the Shenzhen-based BYD Co. Ltd. The Chinese government considers a vehicle to be “new-energy” if it uses hybrid, electric battery, or hydrogen fuel cell technology.

BAIC BJEV reported around 100,000 new-energy vehicle sales in 2017, a nearly 100% increase from the year before, according to Li Yixiu, deputy general manager of BAIC BJEV.

BAIC BJEV’s sales accounted for around 13% of the 777,000 new-energy vehicles sold in China in 2007, according to data from the China Association of Automobile Manufacturers.

BAIC BJEV’s sales received a boost in part from China’s generous government subsidies, which will be phased out by 2020. Instead of the subsidies, the government will introduce a quota system next year to support the industry. The system will employ a cap-and-trade mechanism that requires automakers to ensure a certain ratio of their sales come from low- and zero-emission vehicles.

Additionally, BAIC Group has said that it is considering a restructuring plan to integrate its five other subsidiaries with businesses similar to BAIC BJEV in order to avoid “excessive in-house competition.”