By Xiao Ying and Fran Wang 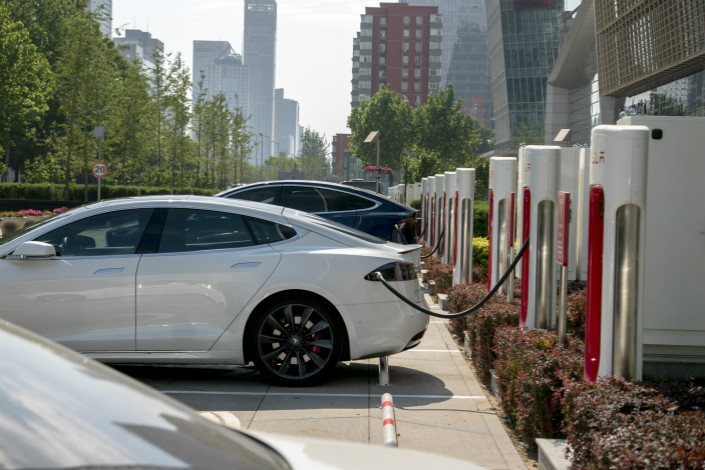 Government officials say "low-quality, blind expansion" in the new-energy vehicle industry has led to concerns about overcapacity that the government is now studying. Above, a Tesla charging station at the Beijing Huamao Center is seen on May 15. Photo: Visual China

The Chinese authorities have started an investigation into overcapacity in the new-energy vehicle manufacturing sector as entrepreneurs have swarmed into the market to tap lucrative state subsidies, a senior official with the Ministry of Finance (MOF) said.

The government’s strategy to encourage production of new-energy vehicles (NEV)– those powered by fuel sources other than oil – has had some negative impact, Song Qiuling, a deputy director of the ministry’s department for economic construction, said at an event last week to promote a regulation on a planned NEV quota system.

The “low-quality, blind expansion” has led to concerns of overcapacity which the government is now studying, Song said. She did not specify what measures will be taken if the investigation concludes that too much capacity has been built.

The government designated NEVs as a “strategic and emerging” industry in 2010, with the aim of developing domestic companies into global leaders in a market currently dominated by foreign car makers. It also hoped the drive would reduce China’s dependence on imported oil, a strategic national security concern for Beijing, help meet the government’s carbon emissions target and clean up the country’s polluted air.

The main types of NEV covered in the policy were those using hybrid, electric battery, and hydrogen fuel cell technology, but the biggest share of the market so far has been taken by electric battery-powered vehicles.

Since 2010, authorities at both central and local levels have been handing out generous subsidies that have supported NEV research and provided incentives for buyers. Zhao Jian, a professor in the School of Economics and Management at Beijing Jiaotong University, estimated in 2015 that the program would cost central and local governments a total of over 400 billion yuan ($60.4 billion) – more than Luxembourg’s gross domestic product in 2016 – during the five years through 2020.

Lured by subsidies and other favorable policies, investors have rushed into the industry. Since the government started allowing start-up firms to solely manufacture electric cars in June 2015, 15 companies have received licenses and another 13 are preparing to submit applications, according to Caixin investigations. By 2020, the total planned NEV production capacity announced by these 28 companies will exceed four million units, double the government’s sales goal for that year.

In addition to the new entrants, domestic and foreign vehicle manufacturers are piling in to the market. They include First Automotive Works, one of the country’s biggest producers which has joint ventures with Germany’s Volkswagen (VW), Japan’s Toyota and the U.S’s General Motors; Shanghai Automotive Industry Corp., which has ventures with VW; and Dongfeng Automotive, which has a venture with Japan’s Nissan Motor and France’s Renault. U.S. electric car manufacturer Tesla Inc. has said it is in discussions with the Shanghai government to open a manufacturing facility in the area.

China is now the world’s largest NEV market. More than one million units were sold as of the end of 2016, accounting for half the global total, Minister of Science and Technology Wan Gang said in June.

The subsidy program has led to widespread fraud as some companies employed a range of tricks to qualify for aid, including producing substandard NEV, passing off ordinary vehicles as new energy models by installing an electric battery, submitting false statistics to claim subsidies, and selling poor quality or fake NEV to related companies who then claimed purchaser subsidies from the government.

Then Finance Minister Lou Jiwei raised the specter of overcapacity as far back as January 2016 when he warned that the subsidy system and its abuse could lead to “blind expansion” and “low standards.” He pledged that fraud would be investigated and regulations tightened. The incentive system was finally overhauled late last year and the government has said it will stop subsidizing NEV buys by 2020.

Speculation is rife that the National Development and Reform Commission, the country’s top economic planning agency, and the Ministry of Industry and Information Technology suspended approval of new NEV projects in June. The commission has not responded to requests from Caixin to confirm the claims.

Many industry analysts say an investigation into the NEV sector is needed to study the expansion plans of various companies, assess whether they are likely to materialize and whether they will lead to overcapacity. The problem is how to measure excess capacity especially in a market that is expected to grow rapidly.

Cui Shudong, secretary general of the China Passenger Car Association, told Caixin that there is no consistent standard for measuring excess capacity in the auto industry and generally a capacity utilization ratio of 70%-80% is deemed “reasonable”. However, a low capacity utilization ratio at NEV start-ups is “normal” as the industry is still in its infancy and most start-ups haven’t actually begun production, he said.