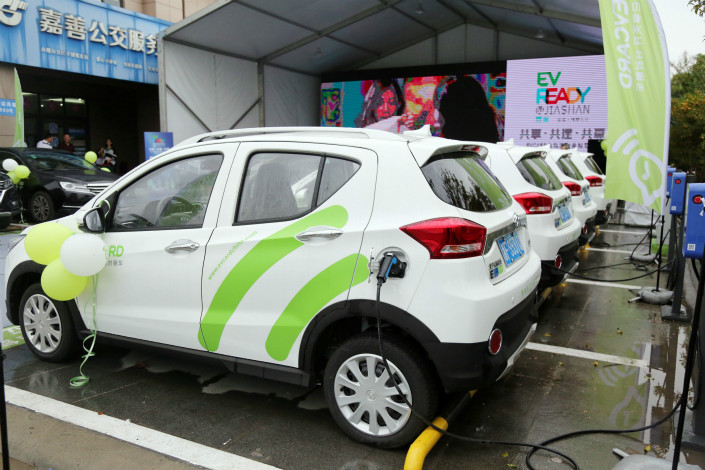 China's now-delayed plan for automaker quotas of new-energy vehicle sales is based on a complex point system that takes individual vehicle emission levels into account. Above, new-energy vehicles are charged in Jiashan county, Zhejiang province, on Thursday. Photo: Visual China

China will delay the rollout of a plan requiring all carmakers to promote new-energy vehicle sales after manufacturers complained they would have difficulty meeting state-set quotas by the original start date.

Beijing is heavily promoting new-energy vehicles in a bid to clean up the country’s air and promote homegrown technologies that can be exported. But after experiencing problems with incentives to promote the sector, the government has switched gears to a quota system that will force traditional automakers to add new-energy cars to their sales mix.

That new system was originally set to take effect next year, and would have set quotas of 8%, 10% and 12% for new-energy car sales in 2018, 2019 and 2020 respectively. Those quotas are based on a complex point system that takes individual vehicle emission levels into account. They roughly correspond to the ratio of each carmaker’s sales that must come from new-energy vehicles every year.

But following industry complaints that the program was being rolled out too quickly, the start date will be rolled back to 2019, according to a statement dated Wednesday on the website of the Ministry of Industry and Information Technology (MIIT). Under the revamped timeline, the 10% and 12% quota figures will still apply for 2019 and 2020 respectively. The MIIT will determine future quotas later, the statement said.

Government sources had previously told Caixin the delayed start date was coming, but the MIIT’s statement marks the first official confirmation of the move.

The new system is designed to create a market that allows for trading between automakers in new-energy vehicle credits. Companies that can’t meet their quotas can buy credits from other manufacturers, which should benefit pure new-energy car producers by allowing them to sell their excess credits. Other countries have used similar market-driven programs for controlling other forms of pollution such as carbon emissions.

In a bid to prepare for the program, major foreign automakers have been forming electric car joint ventures since the middle of this year with Chinese partners that already have such capacity. The list of automakers to announce such ventures include Volkswagen AG, Ford Motor Co. and the Renault-Nissan alliance.

The program is part of China’s bolder aim of phasing out fossil-fuel-powered vehicles completely, following in the footsteps of other countries like Britain and France that have announced similar goals. Earlier this month, an MIIT official said China was working on a timetable to stop production and sales of traditional-energy vehicles, but had yet to decide any specifics.