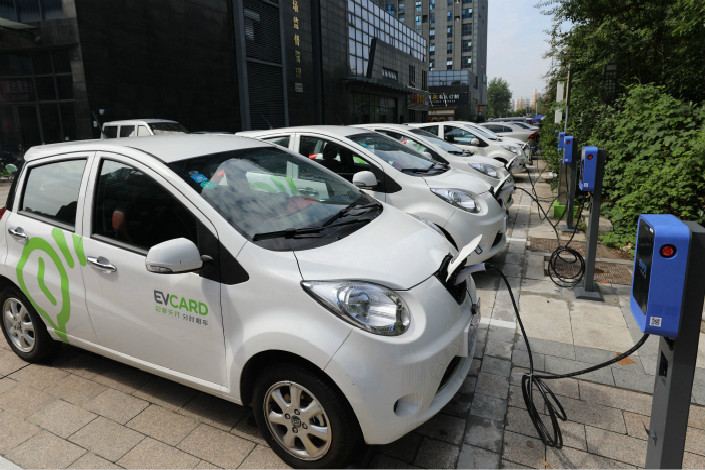 The program sets quotas of 8%, 10% and 12%, respectively, for all carmakers in the three years starting from 2018. Those numbers roughly correspond to the percentage of a company’s cars sales that must be electric or hybrid. Above, electric cars charge their batteries in Hefei, Anhui province on Aug. 9. Photo: Visual China

China will delay the rollout of a tough new quota system forcing traditional automakers to promote new-energy cars, after many manufacturers complained the aggressive targets would be difficult to meet, a knowledgeable source told Caixin.

The plan was originally set to take effect next year. It involves a system that awards points to companies based on the percentage of their vehicles that meet certain emission standards. But now the rollout of the plan will be pushed back by a year to take effect in 2019, a source close to the Ministry of Industry and Information Technology (MIIT), which oversees the sector, told Caixin.

A spokesman from the MIIT could not be reached to comment.

The plan, which was announced in 2016, sets quotas of 8%, 10% and 12%, respectively, for all carmakers in the three years starting from 2018. Those numbers are related to points awarded for each vehicle sale, and roughly correspond to the percentage of a company’s cars sales that must be electric or hybrid, a group generally referred to as new energy.

The new system will allow companies to trade points among each other, a move expected to benefit pure new-energy carmakers, who will be able to sell their excess credits to traditional vehicle manufacturers whose own sales fall short of their quotas.

Under the revised plan, the 8% quota for 2018 will be scrapped. But the 10% and 12% quotas for 2019 and 2020 will stay in place, another source with knowledge of the situation told Caixin, again speaking on condition of anonymity, due to lack of authorization to speak with the media. The source added the plan should still allow China to achieve its target for annual sales of 2 million new energy vehicles by 2020.

U.S. auto giant General Motors Co. and Germany’s Volkswagen had previously said the new quotas would be difficult to meet. A high-level German government delegation had also expressed similar reservations during a meeting with Chinese officials this year, amid reports that the country’s luxury carmakers were worried about inability to make the targets.

To prepare themselves for the new rules, most Western automakers have been scrambling to set up joint ventures with major Chinese new energy carmakers over the last three months. The latest of those came this week, when the French-Japanese Renault-Nissan Alliance announced a new energy car joint venture with Dongfeng Motor Group Co. Ltd.

Despite the one-year delay, the move doesn’t signal an easing of Beijing’s determination to promote new-energy vehicles, as part of a drive to clean up the nation’s polluted air and develop new technologies that can be exported, according to Shenwan Hongyuan Securities. The brokerage said the nation should still be able to meet its target for producing 750,000 new-energy cars next year.

China is the world’s largest car market, with 28 million vehicles sold last year. But new-energy cars are a relatively small in comparison, with just 251,000 sold in the first seven months of this year, according to the China Association of Automobile Manufacturers. Sales were especially weak at the start of 2017 due to major policy shifts to promote the sector, but were expected to rise steadily toward the end of the year.