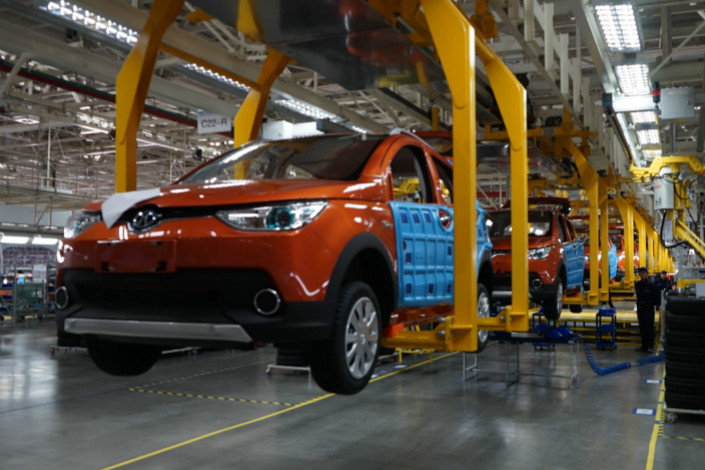 Although it fell short of its 170,000-unit goal, the result was a nearly 100% increase from the year before, said Li Yixiu, chief manager of the subsidiary, BAIC BJEV, on Tuesday.

The company’s sales accounted for around 13% of the new-energy vehicles sold in China last year, which reached 777,000, according to data released by the China Association of Automobile Manufacturers on Thursday.

This increase in new-energy vehicles sales has been partly the result of the company — much like dozens of other domestic and foreign automakers — ramping up its efforts to enter this policy-driven market, which has been supported by generous government subsidies.

However, industry experts said that 2018 could be a challenging year for the company, whose new-energy vehicle sales have mainly come from its so-called “mini electric vehicles” with a range of less than 200 miles, as the Chinese government has announced plans to wind down subsidies for these kinds of cars.

The subsidy program, which will be completely phased out by 2020, will be slashed by 20% this year, instead of in 2019 as originally planned, sources close to policymakers have recently told Caixin.

However, Liu said his company has shifted away from reliance on government handouts. New-energy vehicles sold in Chinese cities that do not have a local government subsidy program accounted for 36% of total Chinese NEV sales in 2017, Liu claimed, arguing that this means the results were increasingly driven by consumers’ real demand.

Additionally, BAIC BJEV has been eyeing an indirect initial public offering through an asset reconstruction plan. BAIC Group plans to sell the unit to Chengdu Qianfeng Electronics Co. Ltd., a Shanghai-listed company that the automaker controls.

The details of the reconstruction plan will be revealed in March, according to Lian Qingfeng, an executive at BAIC BJEV.