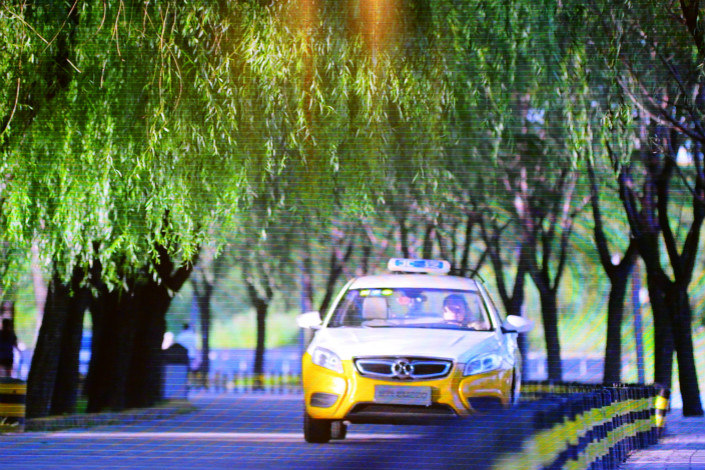 BAIC said that 3,000 charging stations will have to be built in more than 1,000 cities in China over the next five years if it is to reach its goal. Photo: IC

A BAIC Group subsidiary plans to invest 10 billion yuan ($1.51 billion) to produce 500,000 new-energy vehicles through 2022, according to a company executive.

State-owned BAIC’s new-energy vehicle unit, BAIC BJEV, set the target just as the Chinese government is winding down incentives that drove China into its place as the world’s largest maker of electric vehicles.

To hit its goal, BAIC BJEV has set its sights on the taxi and ride-sharing sectors, which the company sees as potential lanes that it could use to eventually reach the market for privately owned vehicles, Li Yixu, chief marketing manager of BAIC BJEV, said in an interview last week.

“Based on the current number of taxis sold in China, which is about 1.8 million, setting a target of 500,000 over five years is not aggressive, as we are building up the charging infrastructure,” Li said.

To reach that goal, 3,000 charging stations will have to be built in more than 1,000 cities in China over the next five years, Zhang Yong, deputy general manager of BAIC BJEV, said at a business event last week.

China’s new-energy vehicle market has taken off in recent years thanks to a series of government incentives, including subsidies. The country is now the world’s largest manufacturer of electric vehicles with more than 500,000 sold last year. The central government wants 5 million new-energy vehicles to be produced annually in China by 2020, a category that includes electric and gas-electric hybrid vehicles.

China also leads the world in electric vehicle charging stations. As of 2016, there were about 150,000 stations across the country, according to China’s National Energy Administration.

The overall downturn prospect in the sector has affected BAIC, which reported that it sold 54,000 new-energy vehicles in the first nine months of 2017, meeting 31.6% of its 170,000-vehicle target for the year.

BAIC’s plan to develop its new-energy vehicle business also parallels Beijing’s recent policy to launch a quota system and promote vehicles that don’t run on gasoline or diesel. Under the system, announced in September, all domestic and foreign automakers in the country must start building electric or hybrid vehicles by 2019.

In August, the new-energy vehicle unit of BAIC raised 11.1 billion yuan in new funding as it eyed an eventual separate listing in Hong Kong or on the Chinese mainland, according to company executives.