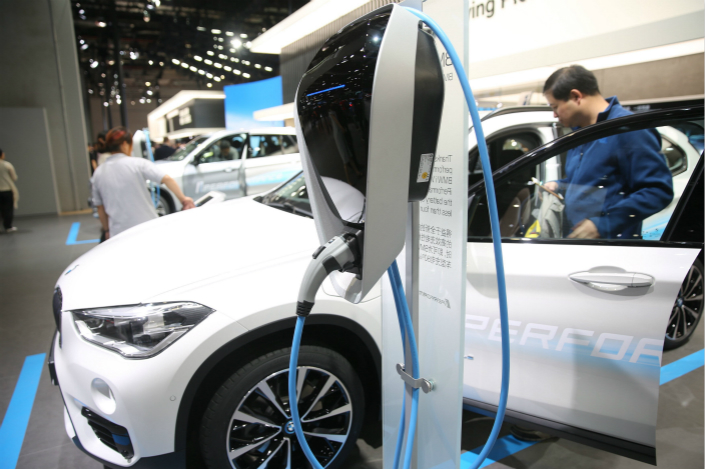 Authorities will slash new-energy vehicle subsidies by 20% next year, instead of in 2019 as originally planned, with the end of subsidies scheduled for after 2020, a source with knowledge of the matter said. Photo: Visual China

China is planning to make it harder for new-energy vehicle manufacturers to access subsidies and will phase out financial support by 2020, according to sources familiar with a closed-door meeting convened by regulators last week.

Separately, the Ministry of Public Security said the country will establish a unified system for new-energy vehicle license plates, and announced it rolled out a pilot project Monday in 12 cities nationwide, including Chengdu and Kunming.

The country’s revised new-energy vehicle subsidy policy will raise the bar for companies looking to receive government handouts, including technology standards such as the energy density of batteries, according to people familiar with the matter.

The source also said that subsidies will be slashed by 20% next year, instead of in 2019 as originally planned, with the cessation of subsidies scheduled for after 2020.

Since 2010, both central and local authorities have been handing out generous subsidies to support electric vehicle (EV) research and provided incentives for consumers.

This drive has helped China become the world’s largest EV market, with over 500,000 units sold last year, almost half the global output.

However the downsides of this policy have become apparent. Chinese authorities have started an investigation into overcapacity in the sector as entrepreneurs have swarmed into the market to tap lucrative state subsidies, a senior official with the Ministry of Finance said in October.

EV sales in China rose 45% year-on-year to 490,000 units in the first 10 months of 2017, according to official statistics. Industry executives said the growing momentum in the sector has posed the government with immense fiscal challenges, which may have inspired authorities to move up the timetable for phasing out the subsidies.

Instead of providing subsidies, the government is preparing to roll out a quota system to continue promoting new-energy vehicles, starting from 2019. Under this system, companies making cars with fossil-fuel engines must buy credits from EV-makers or generate them themselves through sales of EVs and hybrids.

That means the burden of selling new-energy cars will be borne by automakers, which must ensure a certain ratio of their sales come from low- and zero-emission vehicles.

Industry executives have called for the government to provide clarity over the future of EV policies as soon as possible.

One executive who declined to be named told Caixin that Beijing’s policies have a direct influence on his business, and that he hopes uncertainties in the EV market can soon be dispelled.