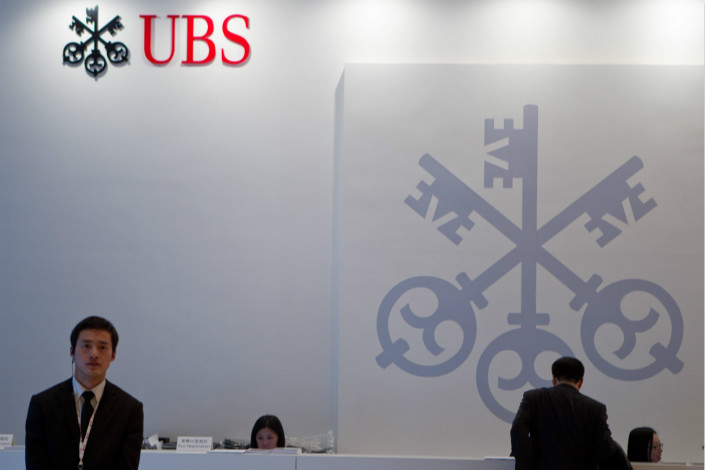 Switzerland’s UBS Group is eyeing a majority stake in its joint venture securities firm in China, becoming the latest major foreign investment bank to show an interest in expanding in the country’s financial market that the government has pledged to further open up.

“We recently celebrated the 10th anniversary of UBS Securities, and under the new regulations, we would like to increase our stake to 51%,” UBS Group CEO Sergio Ermotti said Monday at a news conference in Shanghai.

And more plans are on the group’s agenda to expand its China footprint this year, according to Ermotti. They include developing an “innovative” wealth-management-related business that targets the country’s increasingly affluent investors through a new joint venture asset management company, and tapping the stock-index futures brokerage services with a focus on China’s long-awaited crude oil futures, he said.

UBS Group currently has about 25% of UBS Securities Co., its joint venture with four Chinese state-owned enterprises. It is the brokerage’s second-largest shareholder with the operational control of the firm. Beijing Guoxiang Asset Management Co., which is wholly owned by the Beijing municipal government, holds the largest stake, with 33% of the partnership.

Under China’s existing rules, foreign companies can hold up to 49% of joint venture securities firms in the country. But the government in November vowed to offer overseas investors a bigger role in the country’s financial industry after a state visit by U.S. President Donald Trump, who included trade and market access among the top issues during his trip.

Deputy Finance Minister Zhu Guangyao said back then that foreign companies will be allowed to own a majority stake — up to 51% — of any joint venture in the securities, funds and futures industries, up from the current cap of 49%. The government also vowed to remove the new cap three years after it takes effect.

Following Zhu’s announcement, China’s banking regulator said it will raise the limits on foreign ownership in local commercial banks and asset-management companies, which currently stand at 20% for a single investor and 25% for combined foreign shareholding. Yet it’s not clear for now how much a single shareholder will be allowed to own.

Foreign financial conglomerates have responded positively to the policies. Morgan Stanley of the U.S. has signaled a desire to increase its stake in local joint venture Morgan Stanley Huaxin Securities Co. from the current 49% to 51%. Japan’s Nomura Holdings told Japanese media last week that it plans to establish a retail and wholesale brokerage in China that will be “similar to Japan’s Nomura Securities Co.”

In line with its pledge to further open its financial markets, China had given out a total 10 licenses for wholly foreign owned asset managers to launch private funds in China by the end of 2017, including Fidelity International, BlackRock Inc. and the UBS Asset Management Co.