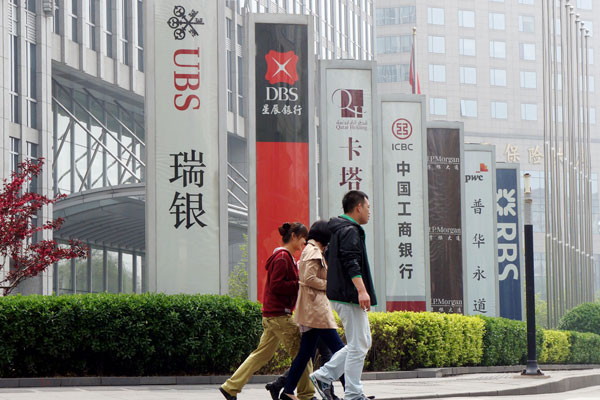 Under relaxed rules, foreign banks will have more access to the yuan-denominated retail banking and bond business. Above: Signs of foreign banks on Financial Street in Beijing. Photo: Visual China

China’s banking sector has grown into the world’s largest in terms of assets over the past decade. Yet foreign banks remain niche players.

The country is taking steps to change that.

On Wednesday, the top banking regulator laid out measures to grant greater access to the banking sector to foreign players. Foreign banks will have more access to the yuan-denominated retail banking and bond business, and face lower barriers to investing in domestic institutions.

The China Banking Regulatory Commission said it “will further push forward the opening of the banking sector in a reasonable order, to expand access, invigorate the market, while improving regulation to maintain the stability of the financial system.”

It’s unclear when the new policies will take effect.

Sources close to the CBRC told Caixin that the guiding principles behind the plan are providing easier access to financial services to foreign players, broadening their business scope and encouraging them to deeply engage with local businesses.

Wednesday’s steps follow a series of measures to open up China’s financial markets announced in November by Deputy Minister of Finance Zhu Guangyao. Zhu said then that foreign companies will be allowed to own a majority stake — up to 51% — of any joint venture in the securities, funds and futures industries, up from the current cap of 49%.

The deputy minister’s announcement was seen as a signal that China is ratcheting up its commitment to opening its massive financial sector, as Beijing seeks to inject more competition into the market.

China began opening up its financial sector 16 years ago as part of its entry into the World Trade Organization. Yet foreign banks account for just 1.3% of the 239 trillion yuan banking industry in China, down from 2.38% in 2007.

Echoing Zhu’s pledge, the CBRC said China will lift restrictions on foreign ownership in local commercial banks and asset-management companies, which currently stand at 20% for a single investor and 25% for combined foreign shareholding. The commission said foreign investors will be treated similarly to domestic players in investing in local banks, although it hasn't set a clear cap on how much a single shareholder would be allowed to own.

However, foreign bank still will be prohibited from investing in local privately owned banks. These banks were set up under a 2013 pilot program to open the banking sector to domestic private investors, according to the commission.

The commission said it will relax rules saying foreign banks can only accept big deposits – more than 1 million yuan ($151,100) – from individual Chinese savers. Now, they can only get around the high threshold by setting up a subsidiary that is locally incorporated, as major foreign players Citibank and HSBS Holding plc have done.

The commission said foreign banks will be encouraged to conduct government bond-related activities, without providing more detail. Many foreign bank executives have for years called for wider access to the bond underwriting and issuance business in China’s domestic market. Sources close to regulators said such changes would require revisions in laws and regulations, as well as coordination among different departments. But regulators are taking steps to grant equal access to foreign and domestic banks in bond trading, sources said.

Foreign banks will no longer be required to wait one year after setting up operations in the country to start yuan-denominated loan and deposit activities.

The regulator also pledged to encourage foreign banks to get more deeply involved in the financial-services market, and to revise rules and regulations, such as capital requirements for foreign banks, so they are closer to a level playing field when competing with domestic banks.

The latest policies aim to treat foreign investors much like local players in the banking sector, said Fan Wenzhong, head of the CBRC’s international department.

“The policies will offer greater room for business and growth by foreign banks, encouraging them to pay greater attention to long-term strategy in China,” Fan said.

With more engagement in local markets and broader partnership with domestic players, foreign banks will help diversify services and products in China’s financial market and promote competition in the industry, Fan said.

By the end of November, foreign banks had set up 210 business entities in China, including 39 locally incorporated subsidiaries, the CBRC said.

Foreign banks have struggled to gain a foothold in China partly due to lower-than-expected market access and increasingly aggressive competition from domestic rivals.

“It has been proven over the past 10 years that the ownership restrictions are not the biggest constraint for foreign firms to grow in China,” a manager at a foreign-funded bank said.