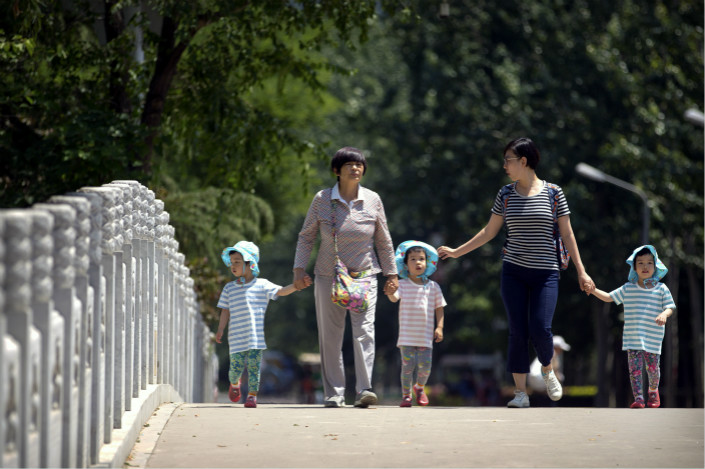 Women and children walk through a park in Beijing on June 1. Photo: IC

China does not plan to further ease family planning policies, despite the less-than-enthusiastic response to a loosening of rules in 2016, as couples continue to worry about the high costs of parenting and a lack of child care facilities in the country, according to a senior official who oversees the policy.

Policymakers are set to review the two-child policy, which was introduced in 2016, before making any further changes to family planning guidelines, Wang Peian, a deputy director of the National Health and Family Planning Commission, told Caixin on the sidelines of China’s annual political meetings in Beijing.

There have been calls for scratching limits on the number of children that couples can have in China to address growing problems of an aging population and a shrinking labor force, especially as a predicted baby boom resulting from the relaxed rules has not materialized.

Wang, a member of China’s top advisory body, sidestepped a question from Caixin about where authorities had properly reviewed the two-child policy before it was introduced in 2016.

The smaller number of babies born last year resulted from a lack of willingness among young couples to have more children amid concerns about high costs and the lack of child care facilities in China.

The ruling Communist Party pledged in October to roll out policies to help couples having a second child, Wang said. Premier Li Keqiang, in his government work report to the ongoing annual session of China’s legislature, specifically referenced the need to develop care centers for children younger than 3, Wang said.

Wang also defended his commission over a glaring discrepancy between its own numbers and those from the National Bureau of Statistics, saying his agency used data collected at maternity care facilities while the NBS used sample-based projections.

Some 17.58 million babies were born last year, 2 million more than the annual average since 2000, according to Wang’s commission.

More than half were the second child in their families, according to Wang.