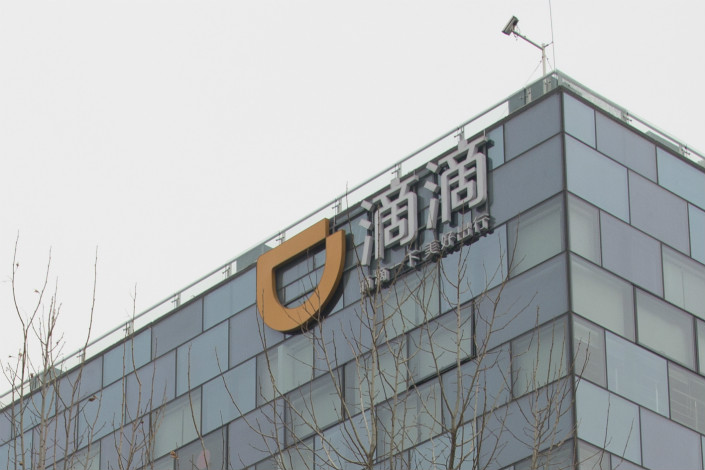 The headquarters of car-hailing service Didi Chuxing is seen in Beijing on Jan. 13. Photo: VCG

The fundraising will be carried out by one of its subsidiary units, Dirun (Tianjin) Technology Co. Ltd., which will issue 10 billion yuan in asset-backed securities on the Shanghai Stock Exchange, according to a filing posted to the city’s stock exchange website over the weekend.

The raised funds will be used for new-vehicle procurement in order to expand the transportation capacity of Didi’s platform, Didi said in a statement on Monday. The Shanghai Stock Exchange has given the program a green light, according to the statement.

The move came after the company announced plans to enter the takeout delivery business early this month, when it posted a job vacancy advertisement online asking for both full-time and freelance deliverymen. This has spurred widely spread rumors that the new funding will be used to challenge Meituan Dianping, one of the country’s largest online-services companies, which itself has recently expanded from its core businesses such as food delivery into ride-hailing. But a Didi representative told Caixin that the money will not be used for the company’s expansion into the takeout sector.

Didi — whose valuation hit $56 billion after it raised $4 billion in December — is the country’s undisputed leader in the ride-hailing industry, with daily active users reaching 13 million as of the end of last year — 50 times the user base of the country’s second-largest player, Shenzhou Zhuanche, according to data consultancy Jiguang.

Still, industry analysts expected Didi will continue to ramp up efforts in takeout service in the near future.

“Having seen other companies — especially Meituan — ratchet up their valuations by billions by focusing on the food delivery sector, Didi — which thinks its large base of ride-hailing users could be channeled into food delivery — also think its time has come,” said industry expert and columnist Ding Daoshi.

However, Didi is expected to face challenges when entering the fiercely competitive takeout sector. As of the fourth quarter of 2017, the Alibaba-backed Ele.me held 55.3% of the market, followed by Meituan Dianping, which had a market share of 41.3%, according to market data and research firm iiMedia Research.

Didi’s foray into food delivery has spurred talks of a price war with Meituan, which has also reportedly prepared a total of $10 billion to ramp up its efforts to break into the car-hailing business.

Meituan has been conducting trial car-hailing services in Nanjing since early last year, and is set to expand the service to other major cities soon.

In response, Didi has launched a subsidy program in seven Chinese cities, including Shanghai and Beijing, allowing selected drivers to purchase a new membership card that allows them to receive extra monthly pay, Caixin has learned.