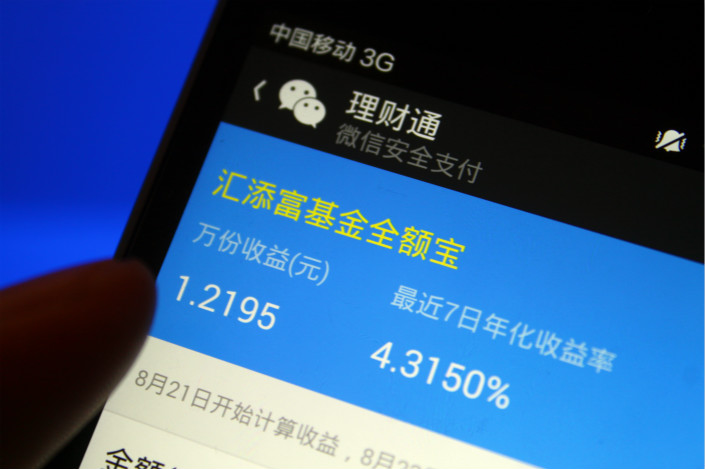 The official website of Licaitong, Tencent Holdings Ltd.'s wealth management platform, shows that the platform had over 100 million users by the end of 2016. Photo: VCG

Licaitong, Tencent’s wealth management platform, saw the assets under its management triple in three years to over 300 billion yuan ($47.4 billion) by the end of January despite regulatory moves last year to restrain the runaway growth of the money-market fund industry.

This is the first time Tencent Holdings Ltd. has revealed the size of assets under Licaitong’s management in its earnings report, making it difficult to determine how much the fund grew last year.

Still, Licaitong pales in comparison to industry leader Yu’e Bao, which managed 1.58 trillion yuan by the end of 2017, according to data provided by Moody’s Investors Service and Wind.

Fearing liquidity risks, Chinese regulators started to curb growth in money-market funds last year by limiting the amount that individual investors can put into these funds, and restricting investments in riskier products.

In March, the China Securities Regulatory Commission started to require all money-market fund managers to set aside no less than 0.5% of net assets as cash reserves to serve as a buffer against potential bad debts.

Licaitong was first introduced in 2014 and is available through WeChat Wallet, which users can directly access through social media app WeChat, which had 1 billion active users as of February. According to data released in January 2015, Licaitong generated 3 billion yuan in profits on 100 billion yuan of assets under management.

Licaitong’s official website shows that the platform had over 100 million users by the end of 2016 and that cumulatively, users have made 8 billion yuan through investing on the platform.