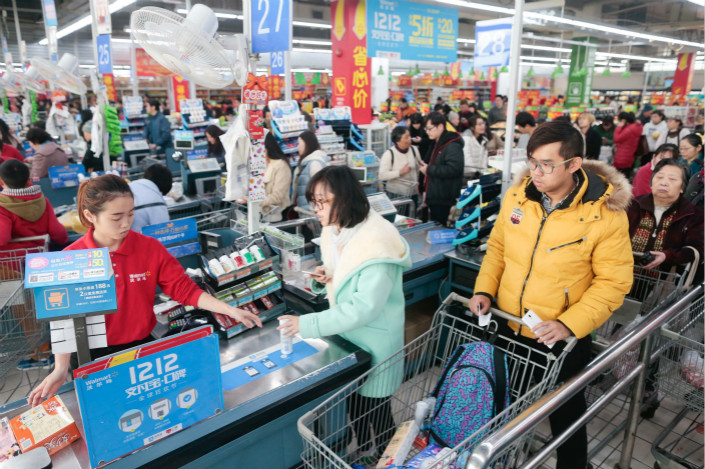 Customers pay at a Shanghai Wal-Mart in December. Photo: VCG

Walmart Inc. will no longer allow customers in western China to use Alipay, the payment platform affiliated with e-commerce giant Alibaba, and will only offer rival Tencent's WeChat Pay as a mobile payment option, several of the retailer’s employees told Caixin.

The change by one of the biggest foreign retailers in China opens another front in the battle between Alibaba Group Holding Ltd. and Tencent Holdings Ltd. for control of the country's booming mobile payment market, where transactions jumped 29% to 203 trillion yuan ($32.1 trillion) last year, according to central bank data. Alipay's and Tencent's payment services between them have at share of more than 90% of the third-party payment market, according to data firm Analysys.

Since March 15, supermarkets in Chongqing municipality and the provinces of Sichuan, Yunnan and Guizhou have stopped accepting Alipay, the Beijing Youth Daily newspaper reported, citing a Walmart statement that described the move as a “business decision.”

The retailer has 90 Walmart-branded outlets in those regions, accounting for a fifth of the nationwide total, according to Caixin calculations based on numbers listed on the U.S. company's Chinese website. Caixin confirmed the move with several Walmart employees in western China, who said they were not sure if the company would reopen access to Alipay. Walmart stores in Beijing, Shanghai and Guangzhou have not been affected, Caixin learned from shop staff in several locations in those cities.

A Beijing-based spokesperson for the supermarket operator declined to comment on the change in payment options, but said the company was “continuously improving services to meet customer demand based on changes in the market.”

Ant Financial Services Group, the Alibaba affiliate that runs Alipay, had no comment, while a Tencent spokesperson told Caixin that the company “respects Walmart’s business decisions.”

The popularity of smartphones and the drive by China's tech giants to develop their own mobile payment platforms outside the traditional banking system has led to an explosion in payments made via devices rather than bank cards. That's built a profitable business for third-party payment providers who charge merchants a small fee for each transaction.

Alipay was the first to dive into the market in 2004 and had a market share of 53.7% at the end of September 2017, up from just over 50% a year earlier, according to estimates from Analysys. Tencent only started its online payment business in 2014, leveraging its ubiquitous WeChat social media platform, which now has 1 billion users worldwide. Although it still trails Alipay, Tencent is catching up — the market share of WeChat Pay and its other payment platforms such as QQ rose to 39.3% by the end of September.

Walmart and Alibaba teamed up in 2015 to roll out the Alipay mobile payment service in the retailer's China stores. However in 2016, Walmart sold its Chinese shopping website to JD.com Inc. in exchange for a stake in the e-commerce group, which counts Tencent as a major shareholder and partner.

That point is well-illustrated by the actions of coffee-shop chain Starbucks. In 2016, Starbucks agreed to exclusively accept WeChat Pay in all its cafes other than three outlets around the headquarters of Alibaba and Alipay in Hangzhou. But after witnessing the popularity of digital payments, Starbucks brought in Alipay as a second option, 10 months later.

“Mobile payment has grown so quickly in China precisely because there’s competition in the market,” he said. “It’s not a bad thing to have competition. Everyone needs to look at this in a more positive way.”