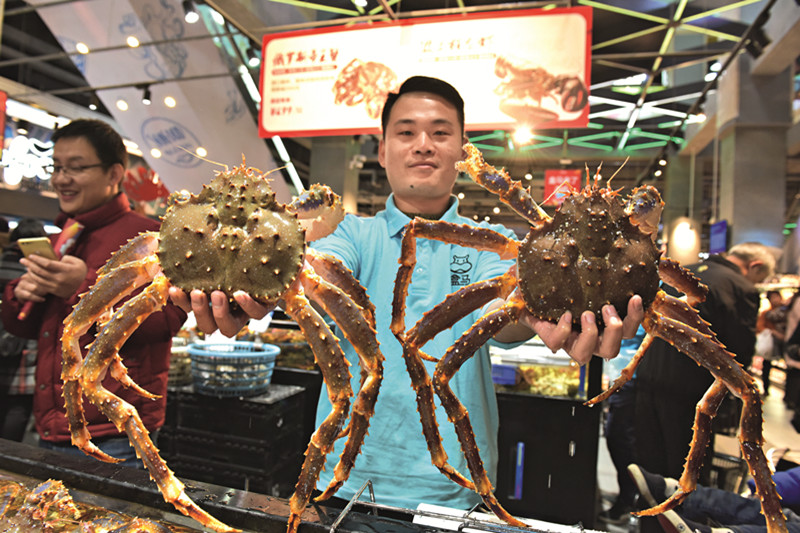 Since 2016, Alibaba has opened 33 Hema stores in several Chinese cities.

(Beijing) - Leading Internet firms Alibaba and Tencent have moved their war for supremacy in cyberspace to the brick-and-mortar realm, taking aim at traditional shoppers in China’s $4.9 trillion retail market.

That battle has sparked a recent buying binge by the pair, which have poured over 100 billion yuan ($15.8 billion) into deals to expand their reach to shoppers who prefer to make purchases in real-time at traditional stores.

Tencent holds an 18% stake in JD.com, which is also closely aligned with global brick-and-mortar retailing giant Walmart, owner of another 10% of JD.com, according to JD’s latest annual report. That three-way alliance has emerged as a major counter to Alibaba in the latest offline retailing war.

The internet leaders are expanding their reach not only in pursuit of new customers for their e-commerce sales, but also to identify potential buyers for their other products, collect data for new services like consumer credit ratings, and forge a retailing hybrid linking the online and offline worlds. The offline campaign is also being driven by the increasingly high price of winning new customers for their traditional online services due to saturation and an overwhelming dominance of China’s e-commerce market by the triumvirate of Alibaba, Tencent and JD.com.

Alibaba operates China’s largest online marketplaces Tmall and Taobao, which had a combined 515 million annual active users as of Sept. 30, equal to about two-thirds of China’s total internet population. Its online payment affiliate Alipay has a similar-sized 520 million users. Tencent, through its popular messaging app WeChat that includes built-in payment functions, has access to an even larger base of about 1 billion users.

The two companies have adopted different strategies in their battle for the wallets of traditional shoppers. While Alibaba usually seeks control of its investment targets through outright acquisitions and major stake purchases, Tencent has used a long-time strategy of building alliances with smaller, strategic stake purchases.

Both are hoping to get a bigger slice of the country’s 772 million internet users, representing more than half of China’s population, who spent $13 trillion last year with their digital wallets.

In its latest financial report released earlier this month, Alibaba reported 525% annual growth in its “new retail” division to 5 billion yuan, or 6% of total revenue. Last year marked the official start of Alibaba’s new retail era, which seeks to blend online, offline, logistics and data units across a single value chain, according to Chairman Jack Ma.

In addition to buying traditional retail assets, Alibaba has also launched its own new retail concepts, such as an unmanned convenience store, that combine traditional brick-and-mortar elements with high-tech touches.

One of its key initiatives has been its Hema chain of grocery stores, which Alibaba rolled out in 2016. The concept includes an app allowing users to place orders on their cellphones for delivery to their home, and pay the bill by Alipay. Hema also operates high-tech brick-and-mortar stores for customers who want to hand-select food and even have it cooked in the store for meals in a restaurant area or to take home.

Starting from fresh food, Hema has expanded its online and store-based offerings over the last year to include a wider range of groceries. “Hema is set to break the boundaries of physical retail stores and blend the business with the app,” said the chain’s chief executive Hou Yi.

Hema stores have become an important way for Alibaba to access high-frequency shoppers, who quickly turn to the company’s online services, sources familiar with the initiative told Caixin. Over 50% of the chain’s orders are placed online, and TF Securities estimated that Hema’s revenue topped 2.5 billion yuan in last year’s fourth quarter, up 50% from the previous quarter.

Hema had 33 stores in several Chinese cities at the start of this month. Alibaba plans to aggressively expand the count this year, aiming to operate 30 stores in Beijing alone. One market expert warned that the fast expansion, combined with new competition, could pose challenges to Hema’s supply chain and business operation capabilities.

Several imitators from both the online and offline realms have already entered the arena. In January, JD.com opened its first online-to-offline grocery store 7Fresh in Beijing, while traditional supermarket chain operator Yonghui has debuted a similar service called Super Spices.

Beyond Hema, Alibaba has set its sights on department stores and even home improvement chains to reach a wider range of users with diverse needs. Last year, Alibaba led a $2.6 billion bid to privatize Hong Kong-listed department store operator Intime Retail Group, following its earlier purchase of a stake in the company. And earlier this month, it said it would pay 5.45 billion yuan for 15% of Easyhome, one of China’s leading home improvement chains.

Tencent is a relative newcomer to the offline shopping realm, firing its first brick-and-mortar shot in December with its purchase of 5% of leading supermarket chain Yonghui for 4.2 billion yuan. Tencent also took a 15% stake in Yonghui’s tech unit — Yonghui Yunchuang Technology Co. That technology unit operates the Hema-rival Super Spices chain, which has over 30 stores with plans to more than triple that count this year.

Under the partnership, Yonghui has connected over 200 of its supermarkets with Tencent’s WeChat service, allowing users of the popular social networking platform to place orders via the app for delivery from their nearest stores.

Tencent has picked up the pace since that deal, following a similar pattern to Alibaba’s of moving into a range of traditional retailing areas.

In January, it led a group of investors including JD.com and Suning Holdings Group in buying a combined 14% of Wanda Commercial Properties Co., the unit of Dalian Wanda that operates shopping malls and other commercial properties. At the start of this month it acquired 5.3% of Heilan Home, which operates 5,608 apparel stores.

A person close to Tencent told Caixin the company is also in talks for a possible equity investment in state-owned commercial and retail conglomerate China Resources.

Those deals reflect Tencent’s preference for taking equity investments of around 5% in its new crop of traditional retailing partners, aiming to leverage its technologies and social networking platforms to strengthen their business.

In particular, Tencent can offer its reams of user data to help its new partners reach more customers. In one example of that with Walmart, the pair are analyzing user data from both sides to design targeted advertisements and distribute coupons to lure users who live near Walmart stores in China.

From a broader perspective, the new crusade by China’s two internet giants is quickly pushing China’s biggest retailers into two major camps, one led by Alibaba and the other by the Tencent-JD.com-Walmart alliance. That trend could accelerate in the year ahead if the current pace continues, further driving big changes for a traditional retailing sector in China that has only really emerged since the country embraced a market economy in the 1990s.

“It is an overwhelming war (for Alibaba and Tencent) to fight for the future,” said an observer who has closely followed the companies’ recent string of mega-deals.