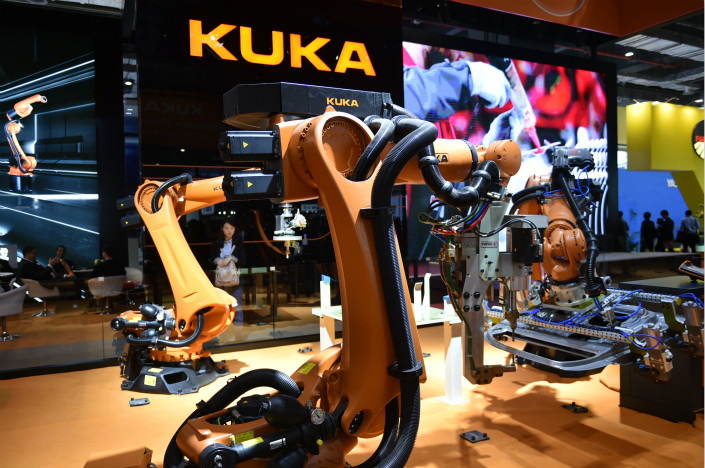 Located in the city of Shunde in Guangdong province, the Midea-Kuka Smart Manufacturing Industry Park will cover an area of about 800,000 square meters (198 acres), according to the partners. It will include a smart manufacturing base, offices and product development labs in its attempts to create a value chain for development of smart appliances and devices.

The project is the first collaboration between the pair following announcement of their formation of a joint venture last week to focus on the fast-growing automation business. The 50-50 venture will work to expand the businesses of industrial robots, health care and warehouse automation, and offer customized products for the China market.

Beijing has been a strong supporter of such collaborations as they encourage traditional manufacturers to move up the value chain by introducing more automation and developing cutting-edge smart products. Whereas China has recently discouraged overseas investment in low-tech areas like real estate and entertainment, it has been much more supportive of such investment in areas like robotics and artificial intelligence.

Already a leader in air conditioners and washing machines, Midea set its sights on the robotics industry with its purchase of a majority of Kuka AG in 2016. Last year, Midea also purchased Israeli automation company Servotronix for $170 million. The launch of the new park is part of Midea’s broader “smart home” strategy of developing home-based products that can, for example, turn themselves on and off as needed without input from a person.

Kuka, the world's leading supplier of auto factory robots and third-largest supplier of basic manufacturing robots, has a plant in Shanghai and has been selling automation equipment in China since 1994. The company is aiming to boost its China sales to 1 billion euros ($1.24 billion) by 2020.

Midea rivals, including Haier and Gree, are also building smart facilities to enhance their production and efficiency of their logistics.