By Mo Yelin and Chen Mengfan 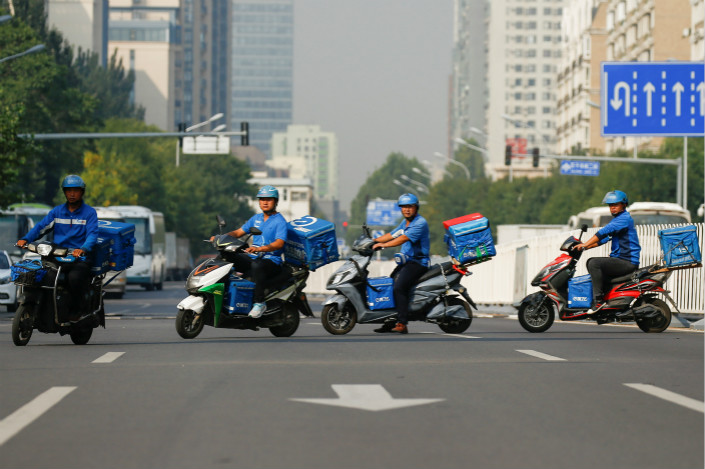 E-commerce giant Alibaba has announced it will purchase the remaining stake of Ele.me, in a deal that values the food-delivery startup at $9.5 billion.

Alibaba Group Holding Ltd. didn’t disclose how much it was paying to gain full ownership. Along with its fintech affiliate Ant Financial Services Group, Alibaba already owned 43% of Ele.me.

The announcement confirmed market speculation that started in February that Alibaba was mulling a move to take full control of Ele.me within three months.

Under the new ownership, Alibaba will appoint one of its executives, Wang Lei, to become Ele.me’s CEO, the e-commerce giant said in a statement Monday.

Former CEO and founder Zhang Xuhao will remain as chairman, but a source close to the deal told Caixin that Zhang may retire from the board later.

Ele.me became the country’s largest food-delivery service provider after it acquired a competitor belonging to internet search behemoth Baidu Inc. in August. Ele.me currently boasts 260 million users and 2 million merchants as Chinese take to their smartphones to have meals delivered to their doorsteps.

The startup held a 50.6% share of the market in 2017, followed by Meituan-Dianping, backed by Alibaba rival Tencent Holdings Ltd., which had a 41.8% share, according to (link in Chinese) the market data and research firm Analysys.

The booming market has drawn new players, including ride-hailing company Didi Chuxing, which has recently rolled out takeout services in certain cities.

The buyout of Ele.me is the latest step in Alibaba’s “New Retail” strategy to connect both online and offline retail spaces. Ele.me is expected to complement Alibaba’s Hema platform, launched in 2016.

Hema is an app allowing users to place orders on their cellphones for delivery to their homes, and pay the bill via Alipay. Hema also operates high-tech brick-and-mortar stores for customers who want to hand-select food and even have it cooked in the stores.