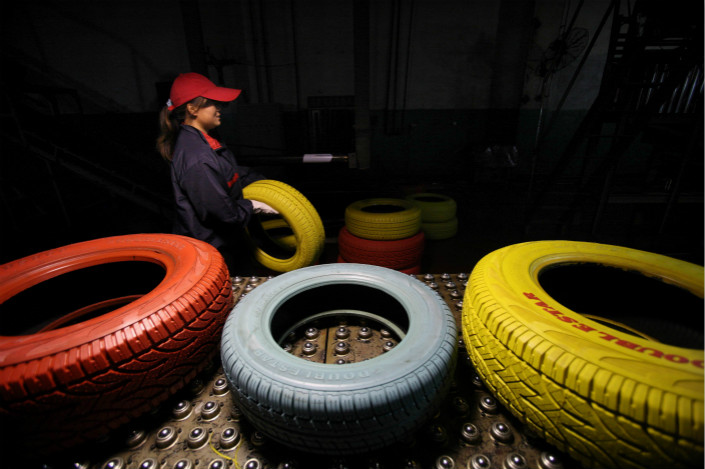 A worker carries one of Doublestar Group’s colored tires at a facility in Shiyan, Hubei province in November 2011. Photo: VCG

The workers’ union of South Korean tire-maker Kumho Tire has ended its opposition to the sale of the debt-ridden company to Chinese Doublestar Group Corp., removing a major obstacle to the deal.

Of the 2,741 Kumho union members who voted Sunday, 60.5 % approved of the sale, according to South Korea’s Yonhap News Agency, which cited a union statement.

The decision came nearly a month after Kumho’s creditors and Doublestar signed an agreement that would transfer a 45% stake in Kumho to the Chinese buyer for 646 billion won ($598 million).

The creditors’ attempt to sell the company to Doublestar aroused protests from Kumho’s workers union, which staged a sit-in protest, saying it feared leaks of core technologies, massive layoffs and a negative impact on the local economy.

Doublestar in the agreement promised to employ current Kumho workers for at least three years and not to sell its stake in Kumho for the next three years.

The workers union said that employees will return part of their bonuses for 2018 and 2019 to contribute to the company’s savings. It also agreed to a wage freeze and the suspension of some benefits through 2019, according to local media.

This is Doublestar’s second attempt to buy Kumho. The initial deal was announced in March 2017, sparking employee protests and concerns about layoffs. At the time, former owner Kumho Asiana Group said that it wanted to buy back the company from creditors. Then in September, the Chinese side said the deal had fallen apart, with no reason given.

In November, Kumho Asiana Group Chairman Park Sam-koo said he had no intention of buying back Kumho Tire, which gave creditors full authority to work on rescue plans for the country’s second-largest tire-maker.

The Doublestar agreement is the latest in a string of Chinese acquisitions of foreign tire manufacturers. In 2015, China National Chemical Corp. agreed to buy Italy’s Pirelli, the world’s fifth-largest tire-maker, for around 7.1 billion euros ($8.7 billion).