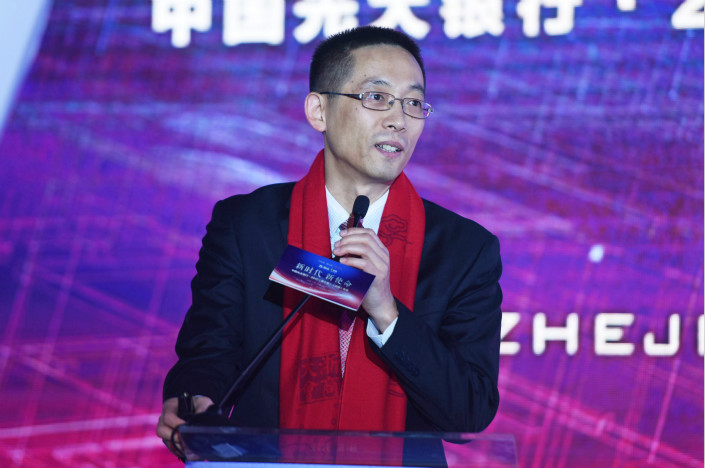 Shi Yigong, one of seven co-founders of Westlake University in Hangzhou, gives a speech in the city on Dec. 7. Photo: VCG

Construction of China’s first private research university is in full swing after it was given the green light to launch in the picturesque city of Hangzhou, in East China’s Zhejiang province.

Westlake University will be composed of the existing Westlake Institute for Advanced Study and a main campus under construction in Hangzhou’s Xihu district, home of the iconic West Lake, according to Shi Yigong, Westlake University’s acting president and co-founder.

The main campus will be built in two stages over the next three years on 246 acres of land provided free of charge by the district government, Shi said.

The university has received approval from the Ministry of Education to operate, according to a statement released Monday via the university’s official WeChat account.

The approval came as China seeks to bolster its international standing in research and development by committing 2.5% of the country’s gross domestic product to science and technology each year.

The central authority in September handpicked 42 Chinese universities — including Beijing’s prestigious Tsinghua University — to be transformed into world-class learning facilities. Another 96 universities have been ordered to improve their research and teaching facilities in specific fields in accordance with the standards of top-tier global institutions.

What will set Westlake University apart from other Chinese higher learning institutions is that it will be research-oriented with a focus on basic science, development of innovative technologies and their applications, said Shi Yigong, a Princeton University-trained molecular biologist.

One of the school’s other defining features will be its small size, according to Shi, who also is a Tsinghua vice president. It plans to admit only 5,000 full-time students, mostly doctoral students, and to hire about 300 teaching staff by 2026, he said. Tsinghua had almost 50,000 students, including over 13,000 doctoral students, as of the end of August.

Tertiary education in China has come a long way over the past four decades, Shi said, adding that “however, when it comes to public aspiration for access to quality teaching at colleges, our higher-learning institutions in general remain relatively weak.”

Shi, who is well-known in China, made national headlines earlier last month when he dismissed many Chinese-authored academic papers as rubbish used in flawed appraisals of doctors, engineers and academic researchers.

The Zhejiang provincial government offered Shi and his six fellow co-founders a one-time 100 million yuan ($15.9 million) grant each to launch the school.

But the institute will rely on private donors for most of its funding, Shi said earlier. Among its high-profile backers are some of China’s richest men, including Wang Jianlin, who runs property and entertainment conglomerate Dalian Wanda Group; and Pony Ma, founder of internet giant Tencent Holdings Ltd.