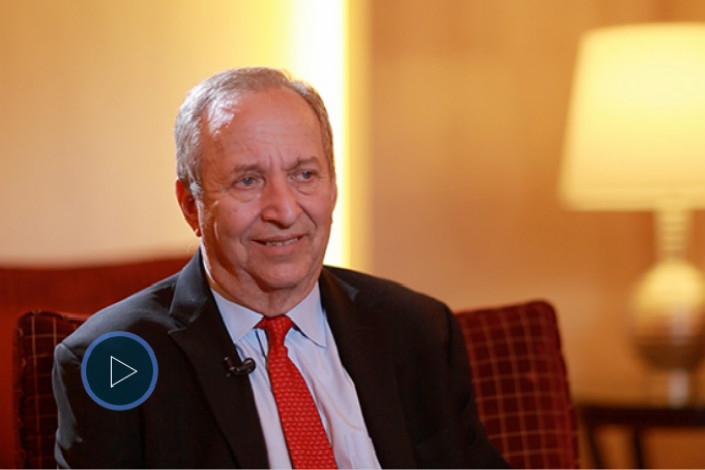 Trade tensions between China and the U.S. have been building as U.S. President Donald Trump threatens to slam new tariffs on Chinese goods, and China vows to respond with measures of “equal strength and scope.”

Summers also shared his views on blockchain technology, the rise of economic adviser Liu He, and financial deregulation in the U.S.

He said blockchain will be of enduring importance to productivity by removing friction in the economy and facilitating exchange.

Summers welcomed his old friend Liu He’s expanded role in economic governance, but stressed that the biggest decisions for reforming the economy are political in nature.

Summers recently visited Beijing to attend the China Development Forum. In an interview shortly before the forum, Summers expressed his concern that financial deregulation under the Trump administration is scaling back capital and liquidity requirements. He warned that such requirements are essential for preventing bank runs. On March 7, the U.S. Senate passed a bill scaling back parts of the 2010 Dodd-Frank Act, which was put in place to prevent a repeat of the 2008 financial crisis. The U.S. House must also pass the bill and Trump must sign it before it becomes law.

Read the full interview below:

Summers: I don’t like formulating the question in terms of one-dimensional “more regulation good or more regulation bad.” I think that’s a gross oversimplification. There’s some regulation that is good for the economy and is probably also good for financial stability, and there’s other regulation that can be bad for banks but still can be bad for the economy and for financial stability as well. Yes, we did repeal Glass-Steagall (the provision of the Banking Act of 1933 that separated commercial and investment banking), but I actually think that made the system safer because it made it possible for the mergers that saved the system to take place. It made it possible for the central bank to lend money to Morgan Stanley and Goldman Sachs at a crucial moment, so I don’t think that was a mistake.

With respect to the current deregulation, I think that it goes to what I think are some of the best and most important parts of the increased regulation we’ve had. I worry a great deal about scaling back capital requirements. I really worry a great deal about scaling back liquidity requirements — requirements that banks hold substantial amounts of cash. It seems to me that the panic phenomenon where people decided they wanted to rush to the bank to get their money out — so they weren’t last in line, so they were sure they could get their money — had a great deal to do with why we had such a difficult time in 2008, and I think requiring banks to hold more capital and to hold more liquidity is probably the best way of preventing those kinds of spirals.

Wang: A related question is crypto-assets regulation. How do you see the current state of affairs for cryptocurrencies?

Summers: I think the blockchain is likely to be of enduring importance, in the same way that alternating current was of importance in making the economy much more productive. I think the blockchain over time will help to take frictions out, and that will facilitate a great deal of exchange, and I think that will be positive. But I think the blockchain is good enough that it can stand on its own two feet, on the merits, and I think that there’s been a certain amount of advocacy of bitcoin on the principle that it can avoid money laundering rules, that it can facilitate tax evasion, that it will somehow succeed at a moment when the dollar enters into hyperinflation. I don’t think any of those are terribly plausible rationales for bitcoin having a major role in the system.

Wang: A hotly discussed topic nowadays is the U.S.- China trade issue. How do you see the prospects here? Will there be a trade war?

Summers: I sure hope there won’t be a trade war. You know, as Ronald Reagan used to say of nuclear war: “Nuclear wars can never be won, and therefore must never be fought.” And I think something very similar is true with respect to trade wars. I think a trade war would be very costly for the United States, and very costly for China as well So I’m pretty worried about trade wars, I think the world will stay out of a big-time trade war, but I’m a lot less sure than I was a year ago.

Wang: So U.S. action on China, is it really going to help U.S. economic prospects?

Summers: I think Americans who think it will help the U.S. economic prospect are wrong. All you have to think about is that we have 40 times as many people who are working in industries that use steel as we have workers in producing steel, so I suspect this will destroy more jobs than it creates. I think the argument that the president has made that this will somehow support national security is crazy, when only 3% of our steel is used for national security, and we produce 70% of our steel domestically. And so I think these steel tariffs are a very poor public policy idea. I suspect over time people will figure that out.

Wang: Liu He, who is introduced to Western audiences as China’s Larry Summers, just got promoted to vice premier of China. How do you see the prospects for China’s economic governance with technocrats like Liu He in key positions?

Summers: Liu He and I have been friends for many years. I was very pleased to write an introduction to his paper on financial crises, which we’ve published under the auspices of Harvard several years ago. He is a man who I admire very much, and I think he will have good ideas for what China can do to strengthen its financial system and the process of economic reform.

But ultimately, economics is embedded in politics, even as it helps to shape political conditions. So what will be feasible to get done in terms of economic reform in China will depend upon the will of the Chinese people; it will depend upon the strength of the Chinese ultimate leadership and that’s a very hard thing to judge. But Liu He seems to me to be someone who will be very good at developing an economic agenda, and at persevering on that economic agenda.

I think that the technical sophistication of China’s financial authorities continues to increase. There’s more expertise with financial systems around the world, there’s more of an analytical approach, and I think that bodes very well. But ultimately politics will make the major decisions, and I don’t think there’s a path forward that doesn’t involve some pain along the way, as budget constraints are hardened, as regulations are increased, and so the authorities will need to have not just wisdom, but also character if they’re going to carry through.