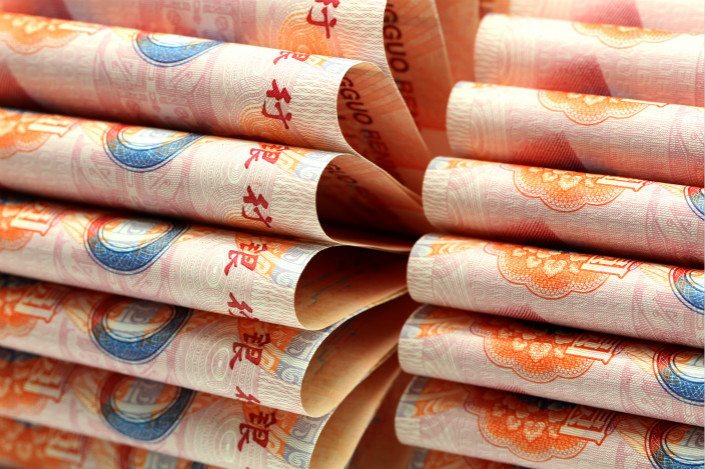 Monday’s meeting of the Central Financial and Economic Affairs Commission said the government will focus its resources on problems that may threaten economic and social stability or trigger systemic risks. Photo: VCG

(Beijing) — Pressure is growing on China’s local governments and state-owned enterprises (SOEs) to cut their debt, with President Xi Jinping and the country’s top economic policymakers adding their weight to calls for immediate action.

“Local governments and the corporate sector, particularly SOEs, must lower their leverage ratio as soon as possible, so that the macro leverage ratio can stabilize and then steadily decline,” according to a statement carried by the official Xinhua News Agency after a meeting of the Central Financial and Economic Affairs Commission on Monday. The commission, which is chaired by Xi, is the country’s top economic and financial policymaking body and was holding its first meeting since the National People’s Congress elected top government officials in mid-March.

Xi has highlighted defusing major risks, particularly those in the financial system, as one of “three major battles” that must be fought over the next three years, and Monday’s meeting said the government will focus its resources on problems that may threaten economic and social stability or trigger systemic risks.

The call by the country’s economic decision-makers underscores concern about the continued growth in local government and corporate debt that has been reflected in several notices issued over the past week by the Ministry of Finance.

The latest document, published on Friday, was targeted mainly at state-owned financial institutions, which were warned to obey existing rules and restrictions on providing funds for local authorities and local government financing vehicles (LGFVs) — special-purpose vehicles set up to raise money for local infrastructure projects. It followed a notice issued earlier last week that laid out the ministry’s priorities for managing local government liabilities for 2018, which included an order that local governments must finish shifting their borrowings into bonds by August to comply with the deadline set by the State Council.

“Lax risk control at some financial firms has helped local government debt to balloon,” the ministry said in a separate statement explaining the objectives and background of the document, titled “Notice on Regulating the Investment and Financing by Financial Firms in Local Governments and State-Owned Enterprises,” also referred to as “Document No. 23.”

The ministry sent a clear warning to state-owned financial institutions to obey a ban on providing financing to local governments in any form other than buying their bonds. The document also reiterated a prohibition on granting new loans to LGFVs, which may be aimed at ensuring no additional credit finds its way to the entities after the bond swap program is completed.

State-owned financial institutions, including the big banks, have been a key source of funding for local authorities and LGFVs, and the document highlighted the broad sweep of restrictions already in place on local-government related lending — the words “ban” and “prohibit” were used a combined 28 times in the document.

The ministry’s latest warning will likely make financial institutions increasingly uncertain about lending to LGFVs, analysts at brokerage TF Securities wrote in a commentary on the document. It could affect the prospects for the platforms to refinance their borrowings and intensify expectations that some may default on their debt. That in turn could lead to an increase in their funding costs.

Its authors called for vigilance against the hidden debts taken on by local governments and the dubious channels local authorities are using to borrow, such as government investment funds, government services procurement contracts, and public-private partnership (PPP) projects, where private investors help local authorities fund infrastructure projects, also increase risks due to the complexity and the opaqueness of such deals, they added.

The report warned that the authorities may have to continue to subsidize LGFVs because the platforms’ investments are mainly in infrastructure construction or public welfare projects that either take a long time to yield returns or can generate only limited profits. Borrowings of LGFVs currently amount to about 30 trillion yuan ($4.8 trillion), nearly 40% of China’s GDP and local governments are likely to be on the hook for the “biggest chunk” of the platforms’ liabilities, it said.