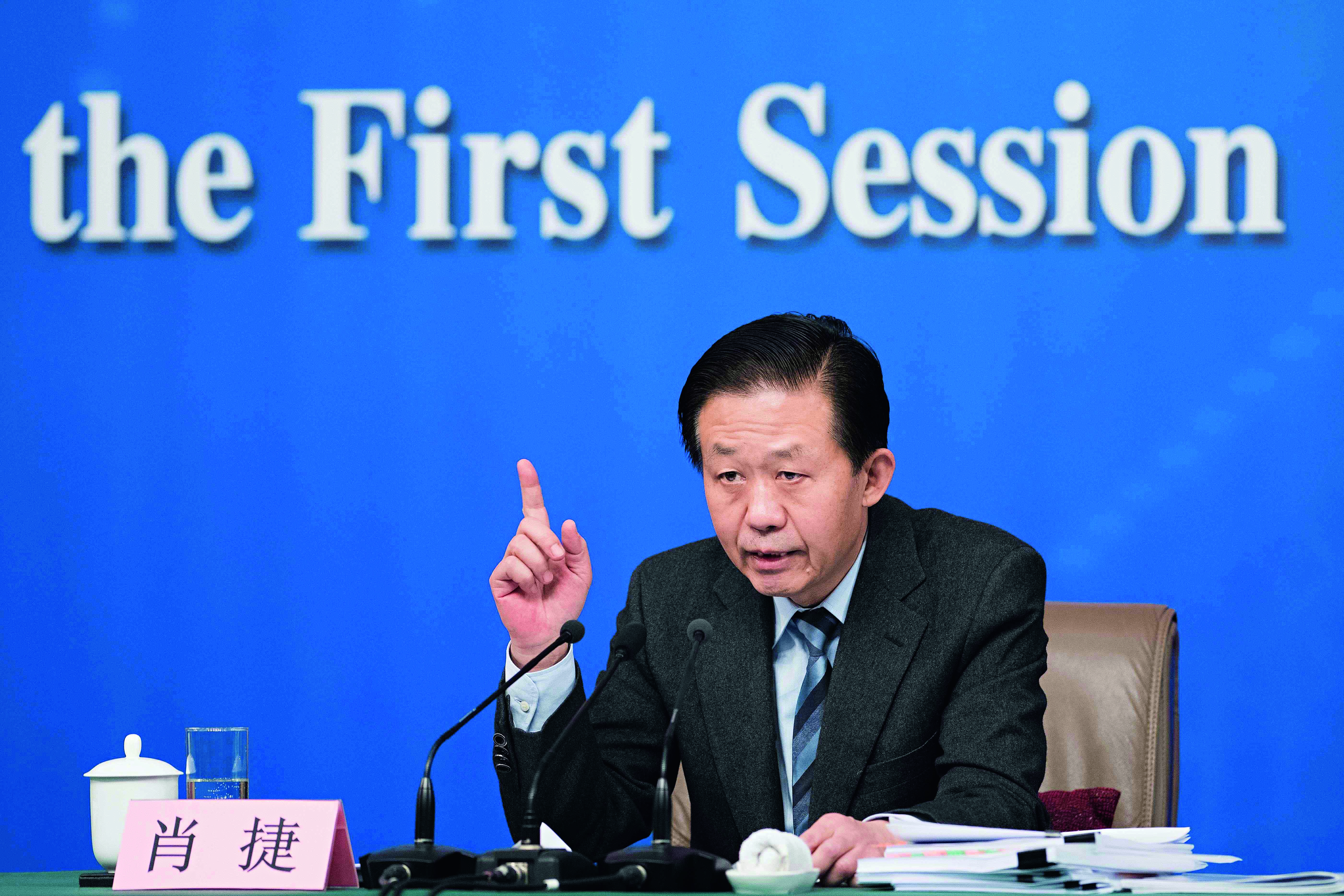 Chinese Finance Minister Xiao Jie talks about the country's budget plan for 2018 during a press conference in Beijing on March 7, 2018. Photo: AFP

Over the past year, China’s central government has issued a series of documents tightening oversight of local government debt, in particular closing loopholes in financing that could lead to risky borrowing.

In the years since the 2008 global financial crisis, the country’s local governments have relied on inventive financing methods to overcome borrowing restrictions and fund infrastructure projects, resulting in ballooning debt and a vicious circle of taking out new loans to pay off existing debt.

Now, many of the financing channels favored by local governments in recent years have been blocked, leaving officials struggling to finance new projects and pay back old loans.

While the scale of visible debt is clear, “no one knows how much hidden debt there is,” a researcher told Caixin, a sentiment echoed by other experts who say that this uncertainty is where the biggest risks lie.

By the end of 2017, China’s total outstanding government debt was 29.95 trillion yuan, ($4.71 trillion) or 36.2% of the country’s gross domestic product, with local government debt accounting for 16.5 trillion yuan, according to figures from the Ministry of Finance. But, according to researchers close to country’s policymaking process, this figure doesn’t account for off-balance sheet liabilities which, in some regions, are as large as five times the visible debt.

Provinces are scrambling to determine exactly how much debt their local governments hold. Shandong, Hubei, Yunnan, Ningxia and Inner Mongolia are among the provincial governments that have called meetings, issued reports, and made proposals to determine the scale of off-balance sheet debt and bring its growth under control. But hidden debt is, by definition, difficult to identify and measure.

There are clues that might tip off regulators — for instance, loans ostensibly extended by financial institutions to businesses but which are actually being repaid with public funds — said Ji Fuxing, associate professor of the University of Chinese Academy of Social Sciences.

There is currently no uniform measure of hidden debt but a number of researchers use related government data to estimate its size. One method used by Shanghai-based Rosefinch Investment takes into account the infrastructure, social security, and housing expenditures of local governments. This method places the total sum of local government debt, including hidden debt, at around 60.7 trillion yuan, according to Rosefinch’s researchers.

Local government financing vehicles (LGFVs) — companies set up to engage in infrastructure projects, obtain loans and issue bonds on the government’s behalf — have been the main avenue for local governments’ off-balance sheet borrowing since 2008.

The debt accumulated through LGFVs has ballooned, with the total borrowing of LGFVs that have issued bonds reaching 47 trillion yuan in June 2017, according to Bai Chongen, associate dean of Tsinghua University’s School of Economics and Management.

A good portion of that debt will come due this year, so that 2018 is set to become the "most stressful year for municipal financing platforms’ refinancing in the history of the debt market,” China International Capital Corporation Ltd. researchers warned in a January report.

In 2018, the value of municipal bonds reaching maturity will hit a record 1.35 trillion yuan. Additionally, interest due on municipal bonds this year amounts to around 258.4 billion yuan, up 15% from 2017, estimates Jiang Chao, chief macroeconomic analyst at Haitong Securities Co. Ltd.

In January, the Ministry of Finance and the China Insurance Regulatory Commission issued a document demanding that local governments stop providing illegal debt guarantees, while another circular in February strictly forbade companies from soliciting or accepting financing guarantees from local governments.

Investors are increasingly aware of the stress facing local government debt financing. More than 60% of investors believe that municipal bonds are the mostly likely of all debt instruments to suffer defaults, according to a January market survey from China International Capital Corporation Ltd.

In response to payment pressure, local governments are likely to integrate the region’s LGFVs with state-owned enterprises to establish financial holding companies and use the holding companies’ larger asset pools to increase the LGFVs’ apparent creditworthiness. The governments of Anhui and Chongqing are among those that have issued documents supporting this approach.

“In the short term, this will become a trend to ease the pressure of debt repayment of municipal bonds through integrating local state-owned assets,” analysts at one ratings agency told Caixin. “But in the long term, this integration will cause operations and asset allocation problems.”

PPPs and service contracts under scrutiny

But, with a series of new rules announced late last year, the central government has clamped down on local governments abusing the PPP model.

Although the PPP model was introduced in late 2013 to help regional authorities struggling to finance infrastructure projects, a weak response from private companies has meant most of the “private” investment involved in these projects has come from state-owned enterprises, prompting local governments to resort to disguising debt as equity to skirt borrowing restrictions.

In November, China’s Ministry of Finance announced that the country’s local governments would have until this month to identify and remove from the official PPP register projects that don’t comply with regulations. In the same month, the country’s state assets watchdog, the State-owned Assets Supervision and Administration Commission, said state-owned companies would now be forbidden from joining PPP projects lacking guaranteed funding.

After the PPP register clean-up deadline passes in March, there will be a sharp decline in the number of registered projects, predicted Wang Shouqing, chief researcher at Tsinghua University’s PPP research center, though the situation could improve in the second half of this year.

A cheaper method of financing than PPPs, as many local governments have discovered, is to disguise loans as service procurement contracts.

But the central government is in the process of shutting down this financing path, as well.

In June 2017, it issued a circular defining the scope of permissible government services procurement by way of a negative list. That list prohibited local government procurement of services related to railways, highways, airports, telecommunications, utilities, as well as infrastructure construction for education, science and technology, health, culture, sports and other fields, and the pre-development of reserve land, irrigation and water conservancy construction projects. The only exceptions were services related to shantytown renovation and work to relocate people living in impoverished places.

It will be even more difficult for local governments to meet the current financial needs of local infrastructure projects by relying on regulation-compliant local government bonds and PPPs alone.

But as regulators impose more restrictions, the ability of local governments to transform and adapt has strengthened, which means they may continue to invent new disguises for their debt, with regulators and local governments becoming mired in a “long-term cat-and-mouse game,” Zhao warned.

As a case in point, some local governments have noticed the regulatory leeway given to poverty alleviation projects and are now trying to use these to disguise their debt and “slyly obtain funds,” said Zhao Quanhou, director of the Financial Research Center at the Chinese Academy of Fiscal Sciences.

The fundamental reason for this pattern of behavior is that “local government debt doesn’t face budgetary constraints,” argued Liu Shangxi, head of the Chinese Academy of Fiscal Sciences. Despite the limits imposed by the 2015 budget law, whether on the central or local governments, government investment and financing plans are formulated and implemented by multiple departments and aren’t integrated into overall budget considerations, Liu said.

In Liu’s view, the solution is to establish central and local government capital budgets integrating investment and financing, erasing barriers between departments and enhancing coordination.

Other researchers say it will be necessary for China to look at more than just debt. “Solving debt risk by relying on local debt management alone is basically an unattainable goal,” said Qiao Baiyun, a researcher at the Central University of Finance and Economics.

China should step back from a pure debt-focused point of view and institute comprehensive reforms to the taxation and financing systems to achieve sustainable development, Qiao argued.