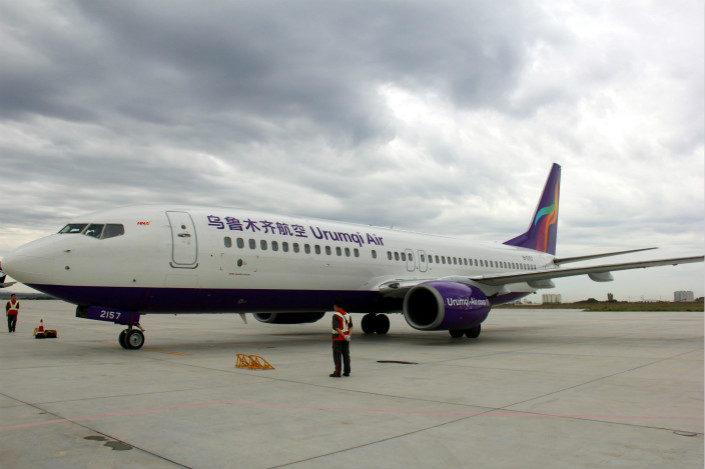 Urumqi Air, a regional airline controlled by HNA’s Hainan Airlines, will receive at least 450 million yuan ($67.6 million) in a capital boost from the investment arm of the local government in Urumqi, capital of the Xinjiang Uygur autonomous region. Photo: VCG

HNA Group’s struggle to pay off its debts continues, with the Chinese conglomerate this week announcing a major Hong Kong land sale and an investment deal with a local government in Xinjiang.

HNA purchased the plot of land through another subsidiary for HK$5.5 billion last year, meaning the group stands to make around HK$900 million if the deal is successfully completed. HKICIM recently sold two other plots in the same area to Henderson Land Development Co. for HK$16 billion.

Meanwhile, Urumqi Air, a regional airline controlled by HNA’s Hainan Airlines, will receive at least 450 million yuan ($67.6 million) in a capital boost from the investment arm of the local government in Urumqi, capital of the Xinjiang Uygur autonomous region, HNA said Thursday.

The deal with Urumqi City Construction Investment is a response to “the country’s ‘Belt and Road’ policy, as well as the Urumqi city government’s instructions to support overall production and strategy upgrades for Urumqi Air,” HNA said in its announcement. Earlier this year, industry publication Airfinance Journal reported that HNA-affiliated airlines on the Chinese mainland had delayed paying back loans due to the conglomerate’s cash crunch.

Urumqi Air was founded as a joint venture between HNA and the local government. HNA will continue to hold a controlling stake in Urumqi Air after the investment is completed, according to the announcement.

The Hong Kong and Urumqi deals are part of HNA’s broader attempt to sell off assets and raise capital after racking up massive debts through aggressive overseas investment.

HNA is also offloading its entire stake in U.S. hotel operator Park Hotels & Resorts Inc. in a series of sales announced throughout the week, for a total of over $1.3 billion.