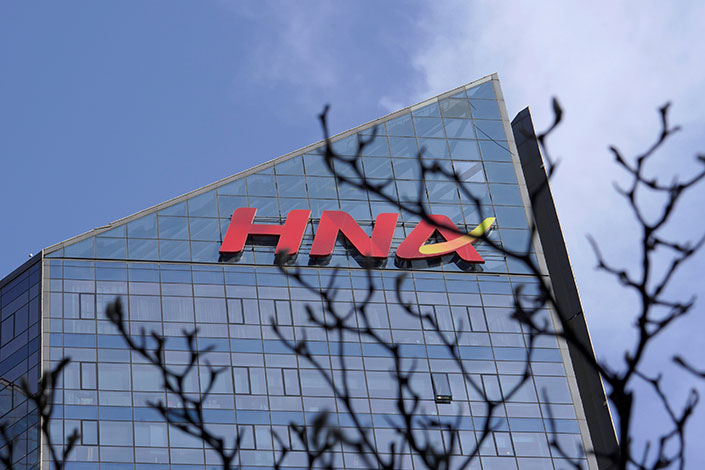 The HNA Plaza is seen in Beijing on Friday. HNA said it is "very healthy" financially after S&P Global Ratings lowered its informal credit rating on HNA from B to CCC+. Photo: VCG

HNA Group, the heavily indebted airlines-to-property conglomerate, said on Wednesday it is in a “very healthy financial position,” and that some of its directors and top executives have bought offshore U.S. dollar bonds guaranteed by the group due to their “full confidence” in its business prospects.

The statement follows the disclosure that S&P Global Ratings lowered its informal credit rating on HNA from B to CCC+ to reflect its deteriorating liquidity position. The group is facing “significant debt maturities” and liquidity pressure due to “uncertain access to capital markets,” S&P said in a research update published on Tuesday to downgrade the ratings of Pactera Technology International, an IT-services subsidiary of the Hainan-province-based conglomerate. The agency does not have an official credit rating for HNA, providing instead an assessment of its credit profile.

HNA did not name the executives who bought bonds or the value of their purchases, and did not respond to requests from Caixin for further details.

Although the statement did not refer to the S&P downgrade or address reports that the group has had difficulty raising money to repay its debts, it said “the group not only received its loans from banks, but also from various investments through the sharing of the Group’s future plans with investors.”

It also pointed to a strategic cooperation agreement signed on Friday with China Citic Bank, and added that it had obtained a 20 billion yuan credit facility from the lender. “The group also cooperates with foreign banks such as UBS, Barclays and JP Morgan,” it said.

Bloomberg News reported in January that the company was suffering a liquidity squeeze and that it faced a potential shortfall of at least 15 billion yuan in funds available to repay debts in the first quarter. HNA Group Chairman Chen Feng told the Reuters news agency that the company was facing liquidity issues due to the “big number of mergers” it had made, but said he was confident “we’ll move past these difficulties and maintain sustained, healthy and stable development.”

HNA Group is saddled with billions of dollars of debt after a global acquisition spree over the last few years involving $50 billion of deals in aviation, tourism, real estate and other sectors. Concerns about the group’s ability to repay its borrowings have increased, and the shares of many of its units listed in China and Hong Kong have plunged. Seven of its 16 listed units have had their shares suspended from trading pending “planned major asset restructuring.”

Records show HKICIM purchased the plots around a year ago for a combined HK$14.25 billion, indicating it stands to make a profit of around HK$1.7 billion from the sale.

HNA is one of a number of Chinese conglomerates attempting to raise capital to refinance debts taken on during years of aggressive acquisitions around the world. Fosun International Ltd. and Dalian Wanda Group, two other prolific deal-makers, have issued bonds and sold off assets to raise funds and also to comply with new government guidelines that discourage overseas investment in some industries, including real estate and entertainment.