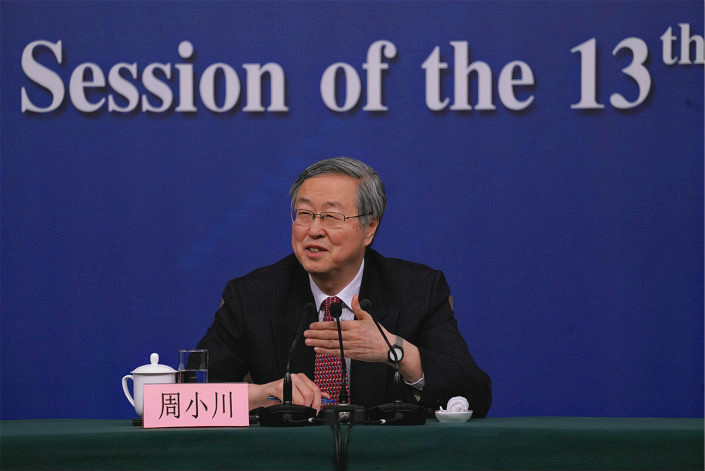 The central bank will take the lead in coordinating the work of financial regulators, People’s Bank of China (PBOC) Governor Zhou Xiaochuan said Friday, while downplaying speculation that the country will adopt a regulatory system similar to the U.K.’s “twin peaks” model.

The PBOC will “play an even more important role” in China’s new financial regulatory framework as the National Financial Work Conference decided in July to set up the office of the new cabinet-level Financial Stability and Development Committee (FSDC), dubbed the “super financial regulator,” at the central bank, Zhou said at a briefing.

Asked whether China will build a similar regime to the “twin peaks” model in the U.K., which divides financial oversight between one watchdog for business and another for consumer protection, Zhou suggested it is unlikely to happen soon.

“Our institutional reform will still be mainly based on China’s circumstances,” he told reporters on the sidelines of the ongoing session of the National People’s Congress (NPC), the country’s top legislature.

“We studied financial regulatory organizations around the world, including the twin-peaks model,” he said. “We feel more time is needed for observation, and we are not necessarily adopting the twin-peaks regime.”

Zhou’s comments came as China’s policymakers’ are weighing how to best carry out the reshuffling of the highly fragmented existing regulatory framework that oversees its increasingly complicated financial markets.

But the divided framework has had an increasingly difficult time keeping up with the dramatic expansion of the financial industry, in which institutions exploit the regulatory gaps to invest in each other in what are often opaque, complicated webs — so much so that a massive shadow banking system outside regulatory oversight has exploded.

Two replacement structures are under consideration. The first, suggested by Xu Zhong, the PBOC’s research head, is to give the FSDC managerial roles by putting the central bank and the three industry regulators under its umbrella, with information, policymaking and implementation shared and coordinated between the bodies. The second is the twin-peaks model, which has been used in Australia, Canada and France.

Zhou added that the NPC will probably discuss government structural reform, including financial institutional reforms, in the last few days of the session, which is scheduled to conclude on March 20.

China has said it will implement measures this year to meet a commitment announced in November to give overseas investors greater access to its financial sector, such as raising the cap on direct or indirect foreign ownership of securities firms, fund-management companies and futures companies to 51% from the current 49%; and abolishing the limit entirely three years after the rules come into force.

Zhou said at the briefing that the government should be “more bold” in widening market access for foreign investors.

At the helm of the PBOC for 15 years, Zhou, now 70, is winding down his career as the longest-serving governor of the monetary authority since its establishment in 1948.

His imprint has been on milestone achievements that include implementing exchange-rate reform, overhauling the country’s interest rate system, liberalizing the capital account, and raising the yuan to reserve-currency status through its inclusion in the International Monetary Fund’s Special Drawing Rights basket of currencies. The accomplishments were achieved even though the central bank’s lack of independence has meant that the fundamental decisions have been made by the State Council or the ruling Communist Party’s top leadership.

China’s massive stimulus to steer through the global financial crisis, which ultimately led to mounting debt problems today, has gotten him some criticism. But it is not possible to figure out just how much Zhou drove these policies or other more celebrated ones because of the country’s opaque policymaking process.

His successor is expected to be announced on March 19 at the NPC.