China Exports Soar, Along With Threat of Trade War 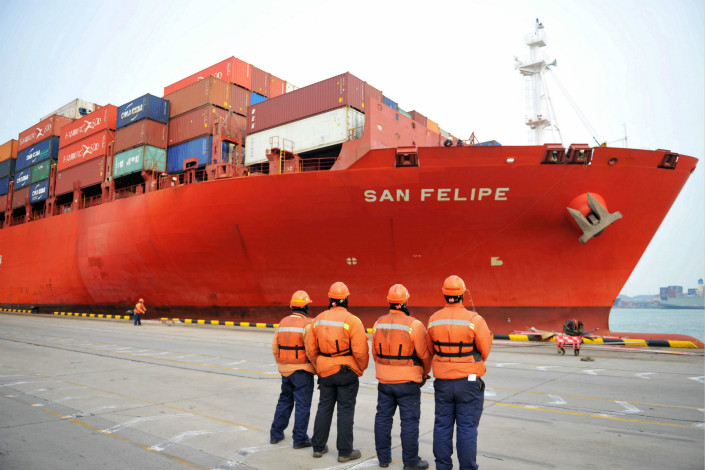 Workers await cargo at the foreign trade terminal at the port of Qingdao in East China's Shandong province on Thursday. Photo: IC

Expansion in China’s exports hit a three-year high in February, greatly surpassing market expectations, while its year-to-date surplus against the United States soared 35%, set to further fuel concerns over a trade war.

Outbound shipments by the world’s biggest exporter in goods surged 44.5% from a year ago to $171.6 billion last month, figures published by the General Administration of Customs showed Thursday.

It marked the fastest growth rate since February 2015 and beat a median forecast for an 11% increase in a Bloomberg News survey of economists. The better-than-expected result came even though February had two fewer working days than last year due to the different timing of the week-long Lunar New Year holiday.

“The Lunar New Year (LNY) holidays appear to have had little negative impact on exports,” Betty Wang, an economist with Australia and New Zealand Banking Group (ANZ), said in a note. “Instead, improving demand may have provided solid support to exports.”

Exports to all major markets posted robust growth last month, with shipments to the U.S., the EU, the 10-member Association of Southeast Asian Nations, and Japan jumping 46.1%, 42.4%, 36.3% and 31.6% year-on-year, respectively, according to customs figures.

However, imports rose only 6.3% year-on-year in February to $137.9 billion, customs data showed. It was weaker than a median projection of growth of 8% in the poll.

That left China with a trade surplus of $33.7 billion, up from January’s $20.3 billion and a turnaround from a deficit of $11 billion a year ago.

Exports in the first two months of the year soared 24.4% year-on-year and imports jumped 21.7%. The combined figures should better reflect China’s foreign trade as they minimize the distortion of the Lunar New Year holiday, which falls in either January or February each year.

Analysts said the cumulative figures showed both foreign and domestic demand has remained resilient, with some predicting China’s export growth would surprise on the upside this year as it did in 2017.

“While we continue to expect import growth to cool this year, we do not look for a sharp slowdown, as policymakers are targeting an only modestly slower growth of credit and GDP, albeit tighter monetary and financial policies will continue,” he said.

Larry Hu, an economist with Macquarie Capital Ltd. in Hong Kong, said the January-February value, accounting for 80% of China’s total surplus made so far this year, was the highest ever for the period. “Today’s data suggest the threat of a trade war is real,” he wrote in a report.

Capital Economics’ Julian Evans-Pritchard noted that while China’s trade surplus with most of the world has declined during the past year due to stronger domestic demand for commodities, its surplus with the U.S. has continued to expand.

Concerns about trade tensions between the world’s largest economies have intensified after U.S. President Trump announced last week that his administration will impose a 25% tariff on imported steel and a 10% tariff on foreign-made aluminum. The U.S. imports the two metals in large quantities from other countries, including China.

China steel and aluminum exports to the U.S. were $3.9 billion last year, making up 0.17% of its total exports or 0.03% of its gross domestic product, according to UBS estimates.

Although the tariffs may have only a limited negative effect on China, more worrying are the possible trade sanctions pending the result of Washington’s ongoing investigation into whether Chinese companies are stealing the intellectual property of U.S. companies. The probe was launched under the rarely used Section 301 of the Trade Act of 1974.

“The US’ potential action on China’s intellectual property sector may also add further uncertainties to trade relationships between the two countries,” Wang of ANZ said. “We cannot rule out the possibility that China may retaliate by focusing on the US’ agricultural exports after the overwhelming ‘Two Sessions,’” she said, referring to China’s ongoing meetings that are scheduled to wrap up on March 20.

On Thursday, Foreign Minister Wang Yi warned that a trade war is a lose-lose proposition; though he also said that China will take action to defend its interests should tensions escalate.

“To choose a trade war in a globalized world today is like giving patients the wrong prescription that will hurt both sides,” he said at a news conference on the sidelines of the National People’s Congress, the country’s legislature. “China will make legitimate and necessary reactions (accordingly).”