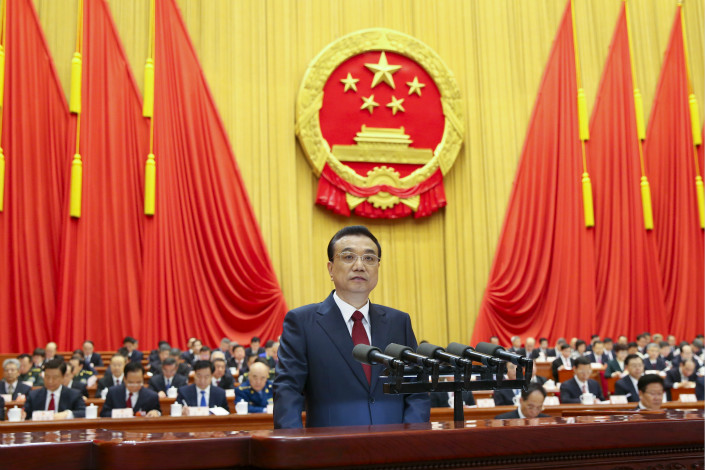 (Beijing) — China on Monday toned down its gross domestic product (GDP) growth target for 2018 to “around 6.5%,” as the Chinese leadership maintains its focus on reining in financial risk and prioritizing quality over speed of its economic expansion.

The growth target for this year, announced by Premier Li Keqiang at the opening of the National People’s Congress (NPC), or parliament, was set at the same number as 2017, but omitted the more-ambitious statement of “higher if possible in practice,” which was included in last year’s objective.

The figure is also lower than the country’s actual economic expansion rate of 6.9% last year, but still higher than the 6.3% pace that economists estimate is needed to hit the government’s goal of doubling GDP from 2010 to 2020.

Li suggested that the target, along with goals for other indicators, will ensure that China meets its social development objectives and will leave room for the country to carry out reforms to improve the quality of growth.

“The above targets take into consideration the need to secure a decisive victory in building a moderately prosperous society in all respects, and are fitting given the fact that China’s economy is transitioning from a phase of rapid growth to a stage of high-quality development,” he said in his “Report On the Work of the Government” (link in Chinese).

He added that the 2018 GDP growth goal will allow the country to “achieve relatively full employment,” as the government for the first time announced a target for the surveyed urban unemployment rate, which covers rural migrant workers and other permanent urban residents. The rate was set at “within 5.5%” for this year. The government also promised to create more than 11 million new urban jobs, the same as the goal for last year.

The government aims to lower its deficit-to-GDP ratio to 2.6% from 3% in 2017 by keeping the value of the shortfall unchanged from last year at 2.38 trillion yuan ($375.1 billion) on the basis of steady economic growth and an increase in fiscal revenue. The reduction is projected even though authorities plan to lower taxes and fees on businesses and individuals, using measures such as raising the personal income tax threshold and cutting value-added tax rates in the manufacturing and transportation sectors by a total of over 1.1 trillion yuan this year, Li said.

The consumer price index (CPI), a main gauge of inflation, is expected to increase “around 3%” this year, compared with an actual CPI growth of 1.6% last year.

Expectations for China to step up the launch of a long-awaited nationwide property tax have been high after Finance Minister Xiao Jie said in an article published in December that the government aims to implement the new levy based on the appraised value of real estate after a special law is passed.

The premier said on Monday that the government will “prudently advance legislation on the real estate tax” this year, but did not elaborate.

Since late last year, China’s top leaders have indicated they will tolerate slower growth as the focus of the next three years shifts to containing risks, particularly financial risks; fighting poverty; and curbing pollution.

In a speech delivered at the Communist Party’s congress in October, President Xi Jinping said the Chinese economy has entered a phase of “high-quality development” after decades of high-speed growth. He stopped short of following his predecessors in setting a long-term economic expansion target at the twice-a-decade event, and has since called on officials to prioritize the quality of growth over speed.

Li echoed Xi’s calls in his report on Monday, vowing to “put quality first” and “achieve a situation in which steady economic growth and improvement in quality and performance reinforce each other.”

Unlike in previous years, the government did not set targets for an increase in M2 — a broad measure of the money supply that includes cash in circulation and all deposits — or in total social financing, the country’s broadest measure of credit that includes bank loans, corporate bonds, equity issuances and bank acceptance bills.

Instead, Li said, policymakers will keep the prudent monetary policy neutral, “with easing or tightening only as appropriate,” and pledged to ensure a “reasonable, stable level of liquidity.”

The government will tighten internal risk controls in financial institutions, strengthen coordination in financial regulation, and improve supervision over “shadow banking,” internet finance, and financial holding companies as it aims to make “notable progress in forestalling and defusing major risks” this year, Li said. He added Beijing will continue to rein in risks from local government debt and reiterated that local authorities should “live up to their own (liability) responsibilities.”

In addition, he vowed to shutter coal-fired power plants with capacities below 300,000 kilowatts that fail to meet standards.