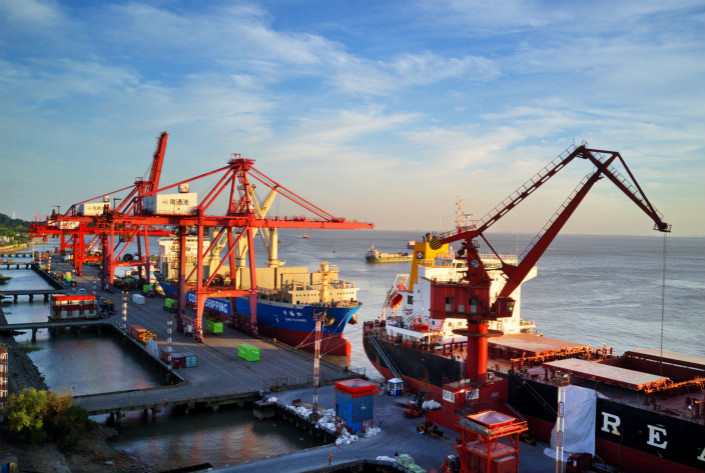 A busy wharf in the port city of Nantong, Jiangsu province on Jan. 10. China’s imports of natural gas rose 33.3% from a year ago to 7.77 million tons in January, the second highest on record, after December’s 7.89 million tons, as the government and gas companies battled to ease a shortage of the fuel. Photo: VCG

China’s imports jumped the most in 11 months in January while exports remained strong, highlighting healthy domestic and foreign demand, although economists cautioned the numbers may have been given an extra boost by the timing of the Lunar New Year holiday.

Imports into the world’s second-largest economy surged 36.9% last month from a year ago to $180.2 billion, figures from the General Administration of Customs showed. It marked the highest growth rate since February 2017’s 38.7% and far exceeded the median forecast of a 10.6% increase in a Bloomberg News survey of economists.

Overseas shipments by the world’s top goods exporter grew 11.1% year on year to $200.5 billion, up from 10.9% the previous month and also beating the median analyst projection of a rise of 10.7%.

The trade surplus came in at $20.34 billion, the lowest since a deficit of $10.97 billion logged in February last year.

The higher-than-expected jump in imports was partly attributed to the timing of the week-long Spring Festival holiday, which starts on Feb. 15 this year while last year it began in late January, meaning there were more working days last month than a year ago. Betty Wang, an economist with Australia and New Zealand Banking Group (ANZ) estimates that after adjusting for seasonal factors, import growth in January was 10 percentage points lower than the official reading.

But despite the distortion, the figures still point to resilient domestic demand at the start of 2018, analysts said.

Wang noted that China’s purchases of mechanical and electrical products spiked, contributing more than half of the headline import growth. Commodity imports such as crude oil and coal rebounded amid higher demand for heating due to a colder winter. “Seasonality, cold weather and higher commodity imports pushed up import growth in January,” Wang said in a report.

China’s imports of natural gas rose 33.3% from a year ago to 7.77 million tons in January, the second highest on record, after December’s 7.89 million tons, as the government and gas companies battled to ease a shortage of the fuel caused by stronger-than-expected demand due to the nationwide coal-to-gas transformation project.

Inbound shipments of coal rose 11.6% from a year ago in volume terms while those of crude oil jumped 19.4% to a record, customs data show. On a month-on-month basis, imports of coal and crude oil soared 22.3% and 20.6% respectively. Imports of iron ore were the second-largest on record, with some analysts attributing the increase to buyers stocking up ahead of the New Year holiday and anticipating higher demand when steel production curbs imposed by the government to lessen smog are relaxed in March after the heating season.

“A pick-up was expected given that more of the build-up in inventories ahead of the pre-New Year rush should have taken place in January this year relative to 2017,” Julian Evans-Pritchard, an analyst with research firm Capital Economics, said in a report.

Louis Kuijs, head of Asia economics at research firm Oxford Economics, cautioned that import growth is likely to cool in the coming months due to the high comparison base last year, the government’s financial tightening policies and weaker real estate activity. He expects growth to slow to 5.5% for the full year from 8.6% in 2017.

However, “we do not expect a sharp slowdown, as policymakers still want to see a gradual slowdown in credit and the economy,” he said in a note.

Economists widely expect the country’s exports to hold up well this year on firm external demand, although trade tensions with the U.S. are casting a cloud over the outlook.

U.S. President Donald Trump has put tackling the growing trade deficit with China and boosting U.S. firms’ access to its markets among his top priorities since coming to power. His administration has slapped anti-dumping tariffs on a range of Chinese imports, such as aluminum and steel, and toughened its stance on Chinese investment in the U.S.

Washington has also begun an investigation into whether Chinese companies are stealing the intellectual property of U.S. companies under the rarely used Section 301 of the Trade Act of 1974. The findings of the probe are likely to be released soon and could lead to hefty tariffs on Chinese imports.

The Trump administration has intensified its punitive measures this year. In late January, it imposed tariffs on imports of solar panels and washing machines from countries including China. The levy on solar panels in the first year will be 30%, dropping gradually to 15% over the following three years. The first 1.2 million washing machines imported into the U.S. every year will incur a 20% tariff and anything over that threshold will be subject to a 50% tax.

The action has sparked complaints from the government in Beijing which on Tuesday challenged the U.S.'s decision at the World Trade Organization (WTO), claiming Washington has broken WTO rules and seeking compensation.

The Ministry of Commerce on Sunday launched anti-dumping and anti-subsidy investigations into U.S. sorghum exports to China.

China's trade surplus with the U.S. jumped 10% to $275.9 billion last year, according to Chinese customs data. The surplus in January fell to $21.9 billion from $25.6 billion in December.

But despite the decline, “China’s near-term trade outlook might still be clouded by the escalation in tensions between the two countries,” ANZ’s Wang said. “We cannot exclude the possibility that China may retaliate by focusing on the US’ agricultural exports, including soy exports.”

Other risks to China's trade performance this year include the potential impact of the yuan's recent rapid appreciation against the dollar if it continues.

The yuan's spot rate in the onshore market has strengthened nearly 3% this year against the dollar after appreciating 6.7% last year, although on Thursday, the Chinese currency weakened 0.77% to 6.3260 per dollar, the largest one-day decline against the greenback since a de-facto devaluation in August 2015.