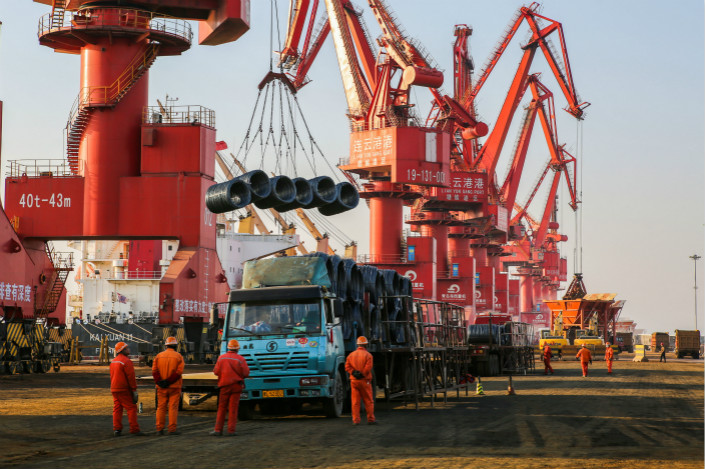 Steel is loaded onto a truck in a port in Lianyungang, Jiangsu province, in March 2017. The China Nonferrous Metals Industry Association said new U.S. tariffs on steel and aluminum will undermine the international trade order, leading to retaliation by its trading partners, including China. Photo: VCG

Several Chinese metal industry associations have lashed out against U.S. President Donald Trump’s plan to impose tariffs on two metals that the U.S. imports in large quantities from other countries, including China.

“Our steel and Aluminum industries (and many others) have been decimated by decades of unfair trade and bad policy with countries from around the world,” Trump said in his Twitter account, “We must not let our country, companies and workers be taken advantage of any longer.”

The announcement came as President Xi Jinping’s top economic aide, Liu He, was in the U.S. on a mission to calm tensions between the world’s two largest trading partners. Liu met on Thursday with U.S. trade and economic officials, but not with Trump, the Wall Street Journal reported, citing people familiar with the matter.

Marie Diron, managing director of Moody’s Investors Service, said in a note that the tariffs will have a “very small” direct economic effects in Asia, as exports of aluminum and steel to the U.S. typically amount to less than 1% of these countries’ gross domestic product and their total export volumes.

However, over the longer term, tariffs on steel and aluminum could signal a marked deterioration in global trade relations if they are followed by other measures from the U.S. and potential responses from other countries, she wrote.

Trade tensions between the U.S. and its major trading partners have increased under Trump, who says “unfair trade” practices by other countries have taken away American jobs.

In January, Wang Hejun, head of the Ministry of Commerce’s Trade Remedy and Investigation Bureau, said China was extremely dissatisfied with the U.S. government’s decision to slap hefty tariffs on solar panel and washing-machine imports in a bid to aid U.S. manufacturers.

After the U.S. decision to increase the tariffs, Beijing launched anti-dumping and anti-subsidy investigations into U.S. sorghum exports to China.